When Your Basketball Team Partners With Planned Parenthood 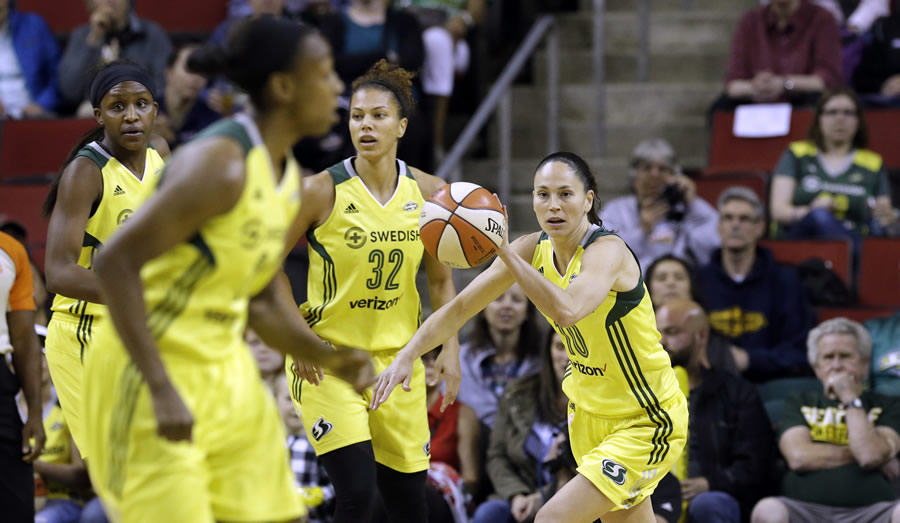 Seattle Storm's Sue Bird, right, in action against the Atlanta Dream in a WNBA basketball game Tuesday, June 13, 2017, in Seattle.

I grew up in a small town without a lot going on. There were two types of girls at my high school: those who dropped out, and those who played basketball.

We had other sports, too, but they served mainly to keep us in shape. Kids at my school couldn’t name our (female!) senators, but they knew everything about legendary coach Pat Summitt. At sleepovers we watched the movie Love and Basketball or a screening of A Cinderella Season: The Lady Vols Fight Back.

When Seattle got their WNBA franchise in 2000, girls in my class drove three hours to watch their first games with Lauren Jackson. When they made the playoffs in 2002, we celebrated Sue Bird, the fresh, energetic rookie from UConn.

So I was surprised when I saw that Bird is still playing. And my heart sunk when I saw the headline at The Seattle Times: “Storm Partners With Planned Parenthood for Fundraising Rally.”

For the first time ever, the abortion giant is getting public support from a professional sports team. Given the abortion provider’s history of exploiting women, I would have expected the Pittsburgh Steelers. But no, it’s the WNBA’s Seattle Storm who will raise money for Planned Parenthood.

The Storm’s owners announced a rally on July 18, with proceeds going to Planned Parenthood of the Great Northwest and Hawaii (PPGNHI).

And guess where infamous Planned Parenthood organ harvester Deborah Nucatola is now? After undercover videos exposed her practice of changing abortion procedures and profiting from the sale of human organs, Nucatola moved … to Hawaii. She is now the Hawaii Medical Director for PPGNHI.

Any dream that requires killing children in the womb is not going to lead to anyone’s best self.

Which means that ticket sales on July 18 will help support the work of a doctor who illegally performed partial-birth abortions. Remember that Nucatola is the one who taught other abortionists the best methods to harvest organs “intact” by ignoring federal law.

Storm owner Dawn Trudeau explained the move to support Planned Parenthood in a statement: “Access to affordable, quality health care, including a full range of reproductive care, is a critical precondition for anyone — especially girls and women, to pursue their dreams and grow into their best selves.”

Basketball is a great thing. It teaches girls how to grow strong, focused and disciplined, and it brings communities together. But any dream that requires killing children in the womb is not going to lead to anyone’s best self.

Partnering with America’s largest abortion provider may benefit the team’s owners, but it doesn’t help women.

Female athletes already face tremendous pressure to abort. Olympic runner Sanya Richards-Ross just wrote a book about her abortion and her post-abortive journey to healing, by God’s grace. But her story is too common.

“I literally don’t know another female track and field athlete who hasn’t had an abortion,” Richards-Ross told Sports Illustrated. “And that’s sad.”

Partnering with America’s largest abortion provider may benefit the team’s owners, but it doesn’t help women. It only compounds the pressure they already feel. And raising money for an organization that harvests human organs is the opposite of empowering.

The Storm’s decision to partner with Planned Parenthood is heartbreaking for pro-life fans. They were a team we once looked to with excitement and pride. But with this partnership, they’re choosing a side in the fight for life ­— and it’s the side of despair and greed.