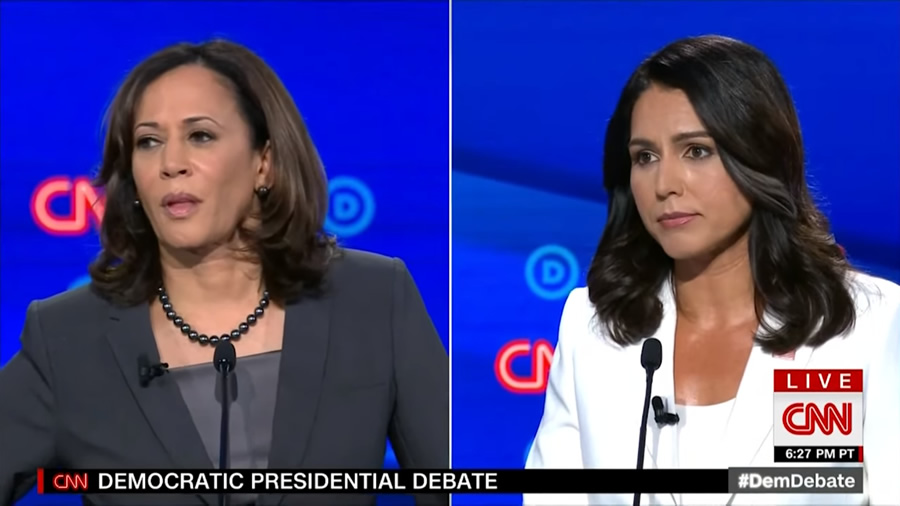 On the presidential debate stage Wednesday night, something big happened. Something that one way or another will dictate the future of the Democratic Party.

Or spell its end.

On the surface, it might seem unremarkable. Democratic candidates, each competing to be the cosseted favorite of the Party establishment, taking their best shots at dissenting views, especially those championed by dissident candidate Tulsi Gabbard.

But look deeper and you’ll see what those candidates really took turns renouncing and ridiculing. Namely, the sentiments of anti-war Americans. And pro-life Americans. And just plain liberal Americans, who still value the free exchange of ideas.

In other words, if Wednesday night’s debate is any indication, the Democratic Party has become a party of war. A party of death. And, perhaps most damningly, an illiberal party. One characterized by an increasingly tyrannical unwillingness to harbor open discussion and dissent.

During her trip, Gabbard met with Syrian president Bashar al-Assad. Unlike Gabbard, Buttigieg said, “I have … enough judgment that I would not have sat down with a murderous dictator like that.”

Gabbard shot back, “What you’ve just pointed out is that you would lack the courage to meet with both adversaries and friends to ensure the peace and national security of our nation.”

It really does say more about Buttigieg than it does about Gabbard that he would attack his fellow veteran with the suggestion that she somehow favors attacks on Syrian civilians. Especially since he knows perfectly well that the purpose of her trip to Syria was to advocate for the interests of vulnerable minorities. The very people whom American regime change wars expose to genocide.

Establishment types use this sloppy piece of rhetorical calumny all the time. Oppose their wars? Note that they have a track record of delivering millions of innocents over to murder, sex-trafficking, and genocide? Then you will be smeared as a villainous supporter of every unseemly action ever taken by the regimes they want to topple.

Elizabeth Warren distanced herself from another aspect of Gabbard’s campaign. Namely, Gabbard’s opposition to late-term abortions, and her openness to pro-life Americans having a place in both major parties.

In fact Gabbard differed with every other presidential candidate in the Democratic field (and agreed with a majority of American women) when she recently said she would support restrictions on third-trimester abortions.

But at this week’s debate, Warren didn’t budge. Asked twice if there is room in the Democratic Party for pro-life Democrats like Louisiana Governor John Bel Edwards, she refused to answer plainly.

However, one thing in her rambling, politically spineless non-answer was clear enough. Defending the “right” to abortion “is fundamentally what we do and what we stand for as a Democratic Party.”

The Democratic Party has become a party of war. A party of death. An illiberal party.

So much for the countless pro-life Democrats in our country! Can you imagine a presidential candidate disparaging any other group like this?

Imagine, for instance, a candidate refusing to clearly answer the question: “Do LGBT Americans have a place in your Party?” Now imagine if only one other candidate from that Party pushed back on that dismissal of LGBT Democrats.

The resulting outrage would lead to the downfall of the party. And so will Warren’s answer to the question about John Bel Edwards, unless Democrats reverse course.

Because it is outrageous. More than half of Americans identify as pro-life. A majority of American women call themselves pro-life.

And this isn’t just about voters. My state senator is a pro-life Democrat. So is my state representative. And what about the hundreds of other pro-life governors and legislators who are Democrats?

Warren’s message to them, and the message of the Democratic Party she seeks to represent, is stark. It’s simply: Get out.

And maybe they all should, if they have the courage of their convictions. Let one and all become independents or Republicans.

It’s “unfortunate” that Gabbard even appeared on the debate stage, said Harris. Why? Because Gabbard criticized America’s destructive foreign policy decisions during the Obama administration. She made appearances on Fox News. She even met with members of the Trump administration to advocate for peace.

Again, Harris’s complaint said more about her and the Democratic Party than it did about Gabbard. Harris essentially warned that Gabbard’s ethics have remained constant. That she is a true and honest liberal, who will embarrass the Washington establishment by speaking openly on behalf of those they harm.

Most tellingly, consider the alternative Harris implicitly proposed. Gabbard should keep silent to avoid embarrassing powerful Democrats who cave to America’s foreign policy establishment. That she should be an illiberal tribalist, refusing to discuss America’s best interests with members of the Republican Party. That she should only appear at media outlets that are loyal to the military industrial complex.

Clearly, Kamala Harris’s Democratic Party is an illiberal party. One that puts tribal loyalty above truth-telling. Which prefers secrecy over open discussion among Americans.

At first blush you might think Wednesday night’s debate was just business as usual. Candidates with sharp elbows attacking their opponent Tulsi Gabbard in an effort to win the presidency.

A lifelong Democrat-turned-Republican named Ronald Reagan once said “I didn’t leave the Democratic Party. The Party left me.”

Well unless it changes course, the Democratic Party will be leaving a lot more Democrats in 2020.