As Jewish Followers of Jesus We Deplore Deceptive Techniques 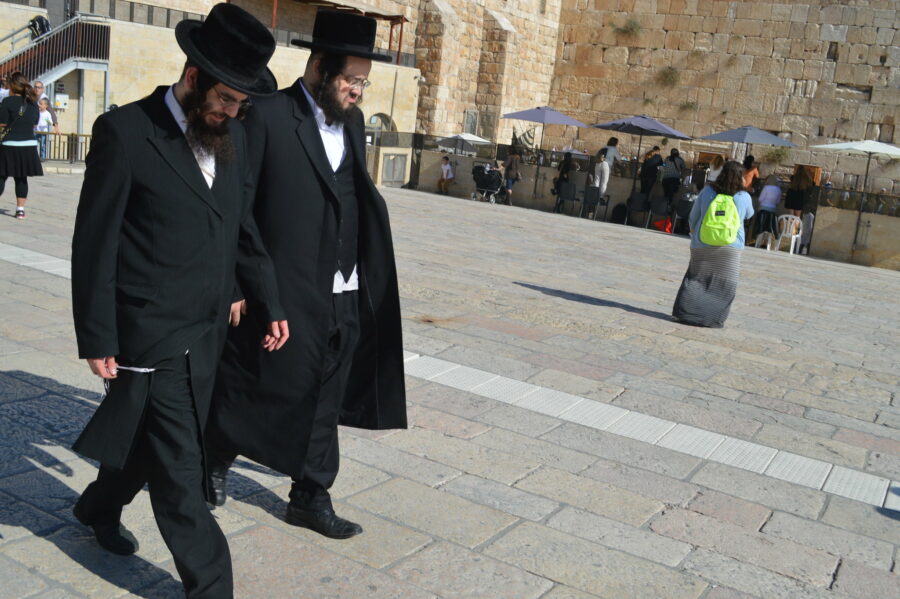 A pair of Haredi Jews pass by the Western Wall in Jerusalem.

The headlines used words like “outrage” and “shock” in describing the news that a man thought to be a Haredi (ultra-Orthodox) rabbi living in Jerusalem was allegedly a Gentile Christian missionary. How could this be?

According to various news outlets, neither he nor his late wife were Jews at all, using forged documents to become Israeli citizens and choosing a Haredi lifestyle in order to infiltrate the religious community.

The Jewish News reported, “Outrage in Jerusalem over ‘rabbi’ exposed as Christian missionary. Israeli media say the man, named as Michael Elkohen, infiltrated a Charedi community in a bid to convert its members.” The headline in Yeshiva World News proclaimed, “New Shocking Details On The ‘Chareidi’ Missionary Family In Jerusalem.” (For a very personal perspective, see here. Elkohen claims that he used to do missionary work 7-8 years ago but has since “repented.”)

But it was not only these traditional Jewish news sites that expressed shock and outrage. The headline in Israel Today, a Messianic Jewish publication in Israel, read, “Shock After Christian Family Found Living as Orthodox Jews in Jerusalem.”

Yes, Jewish followers of Yeshua (Jesus) were taken aback as well, since we too denounce deceptive missionary tactics.

As stated in an official Jews for Jesus document titled, “Jews for Jesus Principles of Ethical Ministry” (sent to me after I requested a statement from David Brickner, head of Jews for Jesus), “We are Jews. We believe in Jesus. In light of this, we clearly present who we are and what we believe (the Gospel message). We deplore materials and techniques that are deceptive or coercive.”

Similarly, Eitan Bar, one of the leaders of the Israel-based, Messianic Jewish evangelistic organization One for Israel, responded to my request for a statement, writing, “I am not familiar with the case nor do I know the family. However, as I wouldn’t want someone to deceive me saying he is a believer only to later find out he lied to me so he can ‘witness’ his faith to me, so I expect believers to hold to high standards and not deceive others by not sharing with them their true faith.”

That’s why we have organizations with names like “Jews for Jesus” (I would say that’s pretty clear!). And that’s why organizations like Chosen People Ministries have mission statements reading, “We exist … to glorify God, proclaim the Gospel to the Jew first and also to the Gentile, and develop resources and programs to accomplish this task.” I would say that’s pretty clear too.

Though some might be tempted to think there is nothing wrong with this kind of behavior [speaking of the Gentile couple in question], which supposedly follows the concept of “to them that are under the law, as under the law, that I might gain them that are under the law,” let’s just say that this kind of understanding turns Paul into a con artist. To better appreciate the problem with such people, think how you would have reacted if an upstanding member of your local church turned out to be a Muslim who prays to Allah five time a day in the privacy of his home. Even with best intentions, wannabe Jews are still deceivers, plain and simple.”

(For a fine academic study, see David J. Rudolph, A Jew to the Jews: Jewish Contours of Pauline Flexibility in 1 Corinthians 9:19-23.)

Why Do Messianic Jews Still Identify as Jews?

It’s because they (in this case, we) are still Jews, and many of us seek to follow in the footsteps of the earliest disciples of Jesus, themselves Jews. The fact that some of us are not at home with later church traditions (such as the separation of the celebration of Messiah’s death and resurrection from Passover) is not a deceptive missionary practice. Rather, it is a sincere conviction of our faith.

What about Haredi Jews who are secret believers in Yeshua? This is not a matter of deception but of pragmatism, since those who lived their entire lives as ultra-Orthodox Jews will virtually lose everything the moment they openly express their faith. If some of them choose to continue to live in their communities as Haredim, sharing their faith privately and discreetly, that is certainly their choice. But under no circumstances should that be compared to a Gentile family claiming to be Jewish and posing as something they are not in order to proselytize others.

What about Christian workers in other, extremely dangerous parts of the world where their true identity must be hidden in order to avoid arrest or death? Here too is not a matter of deception but of pragmatism, as they do not claim to be atheists or Muslims or Hindus. Rather, they share their faith privately rather than publicly.

In light of the revelation about this allegedly Gentile couple, Shannon Nuszen, herself a former missionary but now leading the Israeli organization Beyneynu, stated, “It is very important [to] perceive that we’re not anti-Christian, however Judaism doesn’t take kindly to deception, and ‘covert’ strategies to transform our individuals. We demand honesty, integrity, transparency, and mutual respect.”

Ironically, though, when a Christian organization like GOD TV, working with local Messianic Jews, stated last year its intent to preach the gospel of Jesus on Israeli TV, the reaction against the network was so intense that the government shut it down.

My appeal, then, as a Jewish follower of Jesus, is simple: You are obviously free to reject our message, as most of you do. But please do not attack us for being forthright about who we are. We, too, strive for “honesty, integrity, transparency, and mutual respect.”

Dear Christian Supporters of Israel: Please Do Not Become Enemies of the Gospel