This Article Is Not a Safe Space

Warning: The following contains large doses of reality. If you find that offensive, fetch your smelling salts and keep reading; this is for you. 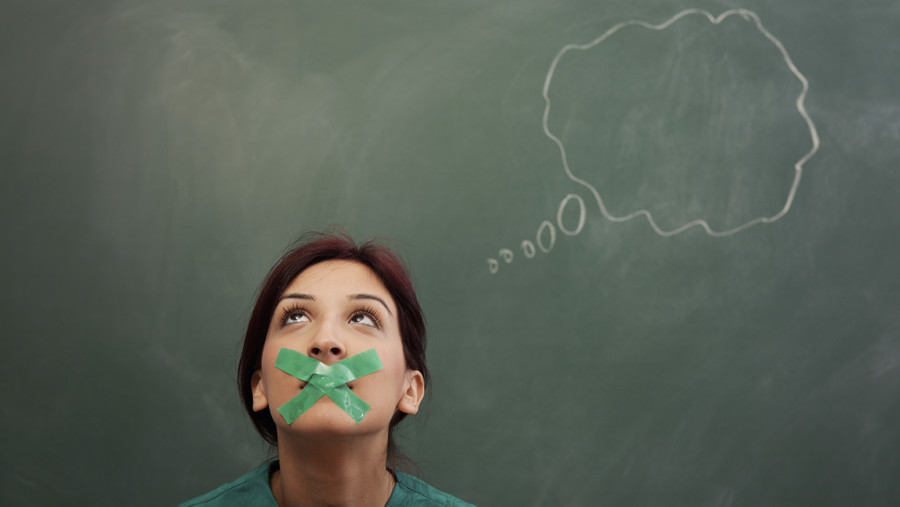 College was supposed to be place for young adults to prepare for full-fledged adulthood, a stepping stone away from childhood and towards independence and responsibility. College was a place where one worked hard and earned a degree that would act as the gateway to gainful employment. Now, apparently, college is a place to spend heaps of money to be treated like a kindergartener while double-majoring in unemployability and victimization. Take Yale and Mizzou.

Before Halloween, students at Yale received an e-mail from Erika Christakis, associate master of Siliman College and wife of Siliman college president Nicholas Christakis, suggesting that, if you are offended by someone else’s Halloween costume, you should look away or tell that person you find their costume offensive, but that they would not take any official action the against free expression rights in costume choices. Students were livid.

Their “safe spaces” were completely threatened, not by an offensive costume, but by the very idea that there might be an offensive costume. Students screamed profanities at the officials behind the e-mail and one student, Jancey Paz, wrote a piece entitled “hurt at home,” which contains such gems of thin-skinned prose as “I feel that my home is being threatened” and “If you know I’m in pain and you aren’t doing anything to try to help me, then how can you be sorry? (Nicholas) Christakis is the Master of Silliman College, it is his job to take care of us, and he is failing.”

No, it is not his job to take care of your feelings. Which, I hasten to remind you, are hurt because of what you are imagining someone might theoretically dress as for Halloween.

“Social justice” has also run amok at the University of Missouri, commonly known as Mizzou. After a series of racially charged incidents (possibly by students, possibly not), black students felt that the campus was “unhealthy and unsafe,” and called for the university president Tim Wolfe’s resignation, as well as for him to “acknowledge his white male privilege.” The football team then held the campus hostage, with one player taking on a hunger strike and two dozen others saying that they would not take part in team activities until their demands were met. I don’t know how to break it to these kids, but they’re not Ghandi. They’re not 1960s freedom-fighters. They are college students, completely equal under the law, and their feelings got hurt, quite possibly legitimately.

Sometimes, people can really be jerks, and that is not OK. But why punish people who had nothing to do with it? Wolfe had nothing to do with the events, which ranged from a fecal swastika on a bathroom floor (vile in several ways) to a person driving on campus with a confederate flag, but the university president is a white man in a position of power so, clearly, he had to go. And, go, he did. Yet, the campus is still protesting about who knows what.

That brings us to Melissa Click. Click teaches Mass Media at Mizzou, and is the kind of “educator” who has gotten us to this point. She has been trying to stir up press coverage over the past few days before Wolfe’s resignation. However, as things spiraled out of control last night after his resignation, she tried to get journalists away from her protest. As a mass media teacher, apparently she is only into the media she chooses. Let’s take a look at her resume, which looks like a parody. I wish it were, because taxpayers are actually paying for this background:

Her research interests center on popular culture texts and audiences, particularly texts and audiences disdained in mainstream culture. Her work in this area is guided by audience studies, theories of gender and sexuality, and media literacy. Current research projects involve 50 Shades of Grey readers, the impact of social media in fans’ relationship with Lady Gaga, masculinity and male fans, messages about class and food in reality television programming, and messages about work in children’s television programs.

So, how are feelings now being handled at Mizzou? By the campus police, of course. Here’s an e-mail that went out to students today: 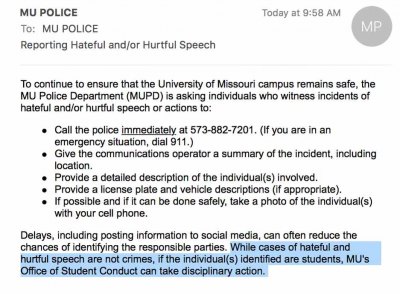 Yes, they’re asking you to call the police over hurtful words, and stating that they are perfectly willing to trample a students’ first amendment right to free speech. Now that we have students cheering for censorship, where will it end? This needs to stop now before it gets out of control. To the students, allow me to rattle your safe space long enough to say, grow up and get a job. That’s what college is for. Sometimes, people will be mean. Sometimes, your feelings will be hurt. This is not a matter for the police. If you can’t handle this, you have no business attending college.

And colleges, get back to doing what you were created to do: prepare students for the world, which is not a safe space. It is loud and complicated; it is messy and sometimes mean; and for the time being, it is free.