Arnold Schwarzenegger, There is a Massive Difference Between Kristallnacht and the Storming of the Capitol 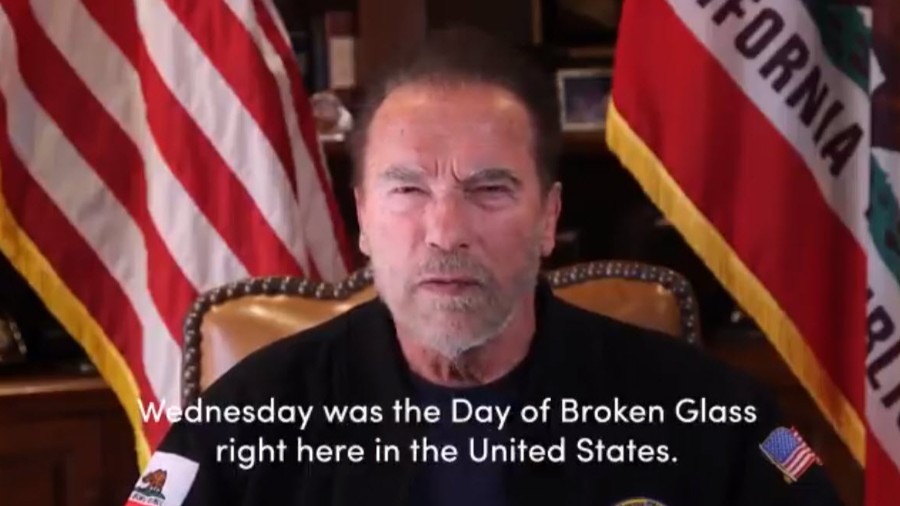 In a powerfully narrated video on his Twitter account, Hollywood icon and former California governor Arnold Schwarzenegger has compared the horrors of Kristallnacht in Nazi Germany, November 9, 1938, to the despicable storming of the Capitol in D.C. on January 6, 2021. Yet he misses a massively significant difference between the two tragic events. And it is that difference, which is a very positive one, on which we should focus.

The video, featuring Schwarzenegger in a law and order, patriotic setting (holding Conan the Barbarian’s sword too!), was posted on Sunday, January 10, amassing more than 30 million views within the first 24 hours and raising many important points.

Schwarzenegger introduces his comments “as an immigrant to this country,” noting that he grew up in Austria. He states, “I’m very aware of Kristallnacht, or the Night of Broken Glass,” which he describes as “a night of rampage against the Jews carried out in 1938 by the Nazi equivalent of the Proud Boys.

“Wednesday,” he continues, “was the Day of Broken Glass right here in the United States.”

Yes, these rioters “did not just break down the doors of the building that housed American democracy. They trampled the very principles on which our country was founded.” Indeed, they “shattered the ideas we took for granted.”

Rather than the perpetrators of the event being endorsed and applauded, they are being despised, marginalized, and brought to justice.

Then, after describing the brokenness and lostness of the generation that had worked together with the Nazis (manifest in his own father’s drunken violence against the family), he states that he has seen firsthand how things can spin out of control, based on lies.

For him, Trump tried to steal a fairly contested election by getting millions of Americans to believe his lies about electoral fraud, and that points to the very real possibility of national deception. In Schwarzenegger’s eyes, Trump will go down in history as the worst president ever, and the Republicans who stood with him will also live on in ignominy.

But Schwarzenegger also has a strong message of hope, speaking of America’s resiliency, calling on our national leaders to have a “servant’s heart” (a phrase he remembers from his Catholic upbringing), and, as a Republican, standing firmly behind President-elect Biden.

To be sure, the Terminator star raises valid concerns about the atmosphere in America that led to the “Insurrection” last week. He also rightly confronts the degree to which millions of Americans would follow Trump no matter what. It is in that same spirit that I wrote a recent article asking, “Is There a Cult of Trump?”

An Unacceptable Downplaying of the Holocaust

Of course, many sincere, thoughtful, non-violent Americans would take strong exception to having their honest questions about potential electoral fraud compared to the Nazi lies. But even so, there is no question that plenty of Trump voters put their trust in him to the point that anyone else, from Jeff Sessions to Bill Barr and from Amy Coney Barrett to Mike Pence, could be thrown under the bus the moment they seemed disloyal to him. That also explains how so many Trump supporters, many of them Christian conservatives, could be ardent followers of QAnon.

All this, indeed, is very dangerous, all part of the cultlike veneration of Trump.

Still, Schwarzenegger missed the biggest difference between Kristallnacht and last week’s incident, and, to repeat, it is a very positive difference. The former took place all over Germany with no resistance from the general populace. The latter was concentrated in one main location — indeed, the very seat of our government — and drew almost universal condemnation from the general populace, including the vast majority of Trump supporters. (And Trump himself.) Across the nation we shouted, “That is not us!”

In the words of a German pastor, author of a powerful book about unconfessed German guilt regarding the Holocaust, “Drawing parallels to National Socialism can be a very dangerous thing, in my opinion, as Arnold Schwarzenegger’s most recent analogy shows, when he compared the rush on the Capitol to Kristallnacht, which is an unacceptable downplaying of the Holocaust.” (This is from his email to me of January 11. That being said, he also noted that “there really are some remarkable points of reference that the Nazi era offers for today.” I will share those in a subsequent article.)

To give a picture of the scope of Kristallnacht, according to Reinhard Heydrich (second in command of the SS after Heinrich Himmler), “815 [Jewish] shops [were] destroyed, 171 dwelling houses set on fire or destroyed … 119 synagogues were set on fire, and another 76 completely destroyed … 20,000 Jews were arrested, 36 deaths were reported and those seriously injured were also numbered at 36.”

Yet, as recounted with sadness by the German Christian leader Basilea Schlink (1904-2001), the general populace did nothing. They saw these atrocities take place in front of their eyes — in their neighborhoods and to their neighbors — and they did nothing. (Ultimately, about 30,000 Jews from Germany and Austria were arrested and sent off to concentration camps in the immediate aftermath of this event.)

As “Mother Basilea” wrote about 10 years after World War II, “We are personally to blame. We all have to admit that if we, the entire Christian community, had stood up as one man and if, after the burning of the synagogues [on Kristallnacht], we had gone out on the streets and voiced our disapproval, rung the church bells, and somehow boycotted the actions of the S.S., the Devil’s vassals would probably not have been at such liberty to pursue their evil schemes. But we lacked the ardor of love — love that is never passive, love that cannot bear it when its fellowmen are in misery, particularly when they are subjected to such appalling treatment and tortured to death. Indeed, if we had loved God, we would not have endured seeing those houses of God set ablaze; and holy, divine wrath would have filled our souls.”

And rather than the perpetrators of the event being endorsed and applauded, they are being despised, marginalized, and brought to justice. In stark contrast with Kristallnacht in 1938, when thousands of Jews were rounded up and arrested, today it is the rioters (whom Schwarzenegger compared to the Nazis) who are being rounded up and put in jail.

We Should Be Encouraged by the Difference

As for President Trump, he has been subject to an overreaction from Big Tech, largely cutting him off from his constituency, while some of his closest advisors are fleeing from his side. This is hardly comparable to the situation with Hitler, the Nazis, and the German populace.

This should encourage Arnold Schwarzenegger rather than discourage him.

From my perspective, while there is much in his video that I affirm and while I agree with some of Schwarzenegger’s concerns, we should also highlight the widespread, intensely negative, American reaction to the Capitol disturbance rather than simply compare this watershed, tragic event to Kristallnacht.

The more we examine the two side by side, the more dissimilar they become. That gives us hope in the midst of the chaos, concerns, and confusion. The Germans tacitly said “yes” to Kristallnacht. Americans are shouting “no” to the storming of the Capitol.