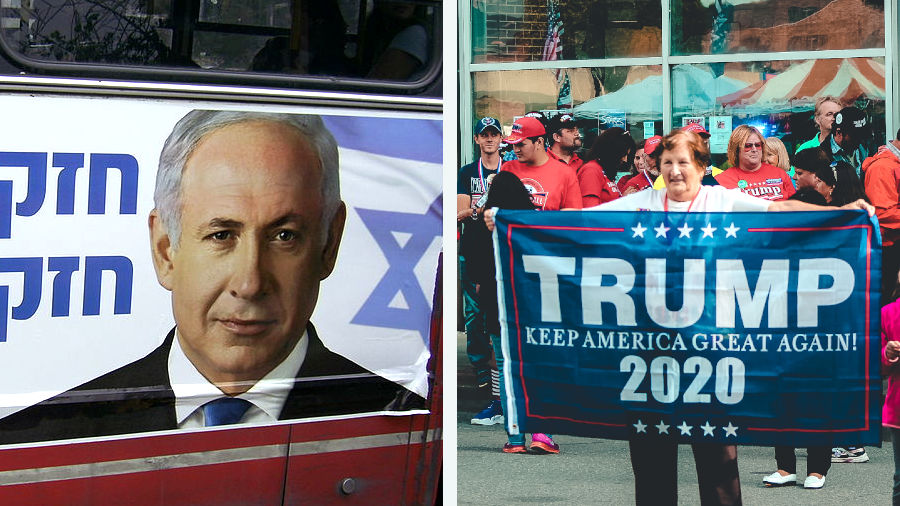 The refrains are now getting familiar. “This is the most important election in our lifetime.” “This is a vote for religious liberties.” “The left hates God and wants to snuff out religious faith.” Only this time, these are not the American elections of 2016 or 2020. They are the Israeli elections of September 17, 2019.

As reported in the Jerusalem Post, “Tens of thousands of ultra-Orthodox men and some women flocked to the climactic mass rally of the United Torah Judaism party in Jerusalem on Sunday to see and hear their great rabbinical leaders, to ‘sanctify God,’ and to hear that the election is a fight for God’s honor.”

Indeed, “in his latest offering of doomsday prophecies for the future of Judaism in the Jewish state, Shas chairman and Interior Minister Arye Deri said on Saturday night that a war is being waged against God and Judaism by the left-wing and centrist parties, which say they will not sit in a government with the ultra-Orthodox political factions.”

The Religious Right and the Secular Left

Just replace “ultra-Orthodox Jews” with “evangelical Christians.” Change the leaders from rabbis to pastors. This then sounds very much like the battle here in America.

Yes, “‘When religion and state get more space in elections, it’s always vitriolic,’ said Einat Wilf, a secular, centrist former Israeli lawmaker. ‘People understand the implication that their way of life is in danger. So the rhetoric in many ways plays into real fears.’”

What are the fears of those on the left?

The ultra-Orthodox men also feel it is sacrilegious for them to take time away from their studies to serve in the IDF. Not to mention the worldly dangers and temptations that await them in the army.

And the fears of those on the left are not entirely unjustified. Already in Israel, “public transit mostly doesn’t run on the Sabbath, [and] the state does not recognize liberal Jewish weddings.”

So, the ultra-Orthodox already have great influence and control. The left doesn’t want to see them get any more.

On the flip side, the ultra-Orthodox believe their way of life is being threatened.

They fear the mandatory draft of their men. They fear a government that wants to exclude them entirely. As expressed by Litzman, “Let us think how the world would respond if they would have declared [they wanted] a government without Ethiopians or Druze [two minority groups in Israel]. But it’s okay to harm the ultra-Orthodox, to slander and disparage Jewish values. The honor of ultra-Orthodox Judaism rests upon the shoulders of every individual.”

They fear the growing secularization of Israel. The worldliness of a city like Tel Aviv, hailed as the world’s most gay-friendly city (among other things), highlights Israel’s secularization.

In the minds of the ultra-Orthodox, God will vomit Israel out of the land if it turns away from the Torah. They, the God-fearing, ultra-observant Jews, are the only hope of the nation. A theocracy would be the ultimate goal.

In the words of Aryeh Deri (who served time for corruption before coming back to political power, the left has “declared war against us, against God, against Judaism and everything connected to it.”

Shades of the secular-religious battle in the States!

Thus, in Israel, as in America, the current elections are viewed as having existential importance.

As stated in the leftist Haaretz, “Netanyahu conducted his campaign like a Trump gone wild on steroids. He lied, defamed, fabricated and provoked his way to center stage, leaving his rivals grumbling on the sidelines, away from the spotlights. He broke all the rules, ignored all conventions, took no prisoners and could very well leave nothing but scorched earth in his wake.”

Shades of the liberal media’s attack on Trump (whether truthful or not).

Here in the States, evangelical Christians do not ask for exemption from military service. They do not insist that weddings be officiated by their clergy. They do not license hotels and catering services (based on dietary laws). They do not enforce bans on public transportation on Sundays or Christian holidays. And, except for a tiny minority, they do not want to impose a Christian theocracy.

The Pressing Question of How to Vote

Back in Israel, Messianic Jews (meaning, Jewish believers in Jesus) are caught between a rock and hard place. A vote for Netanyahu is a vote for secure borders (sound familiar?) and strong international standing. That is positive.

But it is also a vote for ultra-Orthodox power, which means potential persecution. The ultra-Orthodox parties generally insist on controlling the Ministry of the Interior. That means trouble for Messianic Jews seeking to immigrate.

In addition, many Messianic Jews are involved in a ministry of reconciliation with their Arab brothers and sisters. But a vote for Netanyahu can be perceived as a vote against Palestinian equality.

How, exactly, should they vote?

All this being said, and with the real differences between Israel and America duly noted, the parallels are quite striking as well.

Perhaps these are the most important elections in our lifetime after all.