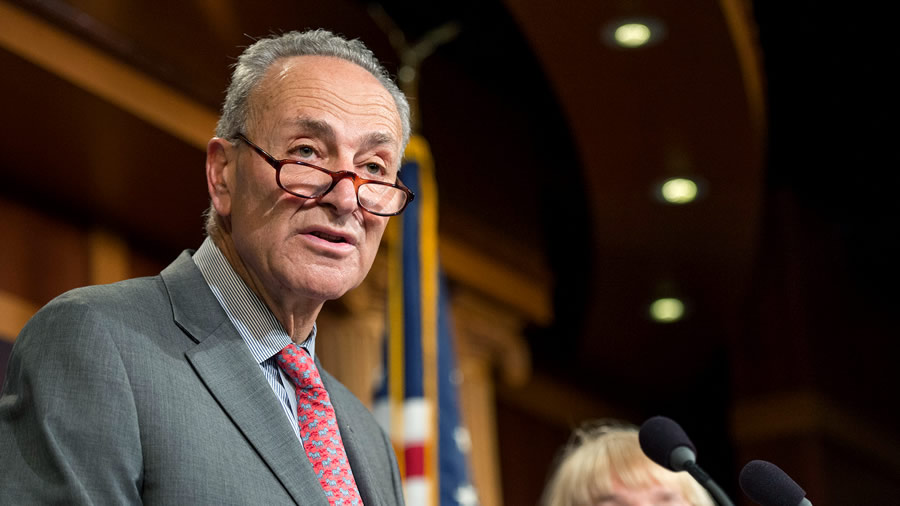 Senator Chuck Schumer’s threats against Justices Gorsuch and Kavanagh are not only outrageous and dangerous. They could well be a precursor of what we can expect should the Supreme Court advance the pro-life cause. There will be rage. There will be intimidation. There will be threats. And there will be violence.

The people who were scratching and pounding the Supreme Court doors during the Kavanaugh hearings will not sit quietly should Roe v. Wade be overturned.

The same people who violently attack peaceful pro-life protesters will turn all the more violent should pro-life legislation be passed.

In terms of physical attacks and verbal attacks, it could get very ugly very quickly.

Let’s remember that Senator Schumer delivered his remarks at a pro-abortion rally in front of the Supreme Court. He was preaching to an already-angry choir for whom Roe v. Wade is a sacred right (or should I say rite?).

And he singled out the two SCOTUS appointees of President Trump, getting more animated with each line: “From Louisiana to Missouri to Texas, Republican legislatures are waging a war on women, all women, and they’re taking away fundamental rights. I want to tell you, Gorsuch, I want to tell you, Kavanaugh, you have released the whirlwind and you will pay the price. You won’t know what hit you if you go forward with these awful decisions.”

He threatened them with consequences should they rule against abortion.

It’s true that the lines following referred explicitly to the November elections.

And it’s true that, having been rebuked by none other than Chief Justice John Roberts, along with political leaders and media pundits, Schumer has apologized in part for his remarks. “I should not have used the words I used yesterday,” he said. “They didn’t come out the way I intended. … In no way was I making a threat.”

But the facts remain: 1) he called out two Supreme Court justices by name; 2) he threatened them with consequences should they rule against abortion; and 3) he said they will “have released the whirlwind.” And the pro-abortion crowd ate up every word.  (For the record, it’s worth asking how would a Democratic wave of victories in the November elections cause Gorsuch and Kavanaugh to “pay the price”? How would election results “hit” them?)

The Rhetoric of the Pro-Life Movement Is Peaceful

To be fair, I fully acknowledge that there have been pro-life extremists who have physically attacked abortion doctors and workers. Some have even resorted to murder. Others have committed acts of arson. I do not deny this ugly history for a moment. It is sinful, inexcusable and shameful. It is the opposite of being pro-life (you don’t murder someone if you are pro-life). And it brings reproach to the name of Jesus. All these acts should be punished to the full extent of the law. (For a recent, pro-abortion perspective on this violence, see here.)

At the same time, not a single major pro-life leader or organization supports such violent acts. Or encourages them. Or seeks to incite them. To the contrary, the rhetoric of the pro-life movement is peaceful, standing firmly against the violence being done to babies in their mother’s wombs.

Contrast that with the words of Chuck Schumer.

Contrast that with Madonna’s “blow up the White House” speech, or Kathy Griffin’s photo with the faux severed-head of the president. (Be assured that Trump’s female enemies would not hate him as intensely were he a strong supporter of abortion.)

The radical feminists are incensed. The pro-abortionists are enraged. And those who stand for life will be the targets.

One little match could spark an unholy fire. One major decision from the Supreme Court could lead to riots across the country.

Late in 2017, a 15-year-old girl, with Students for Life, was punched in the face while engaging in sidewalk counseling outside an abortion clinic.

On March 28, 2019, Mairead McCardle reported that, “An elderly pro-life volunteer was violently assaulted last Thursday by a younger male abortion-rights advocate during a peaceful protest outside a San Francisco Planned Parenthood clinic.

“The perpetrator, an athletic white man clad in black, attacked an 85-year-old 40 Days for Life volunteer, whose full name has not been released out of concerns for his safety, outside the San Francisco Health Center last week.”

And in between these assaults on a 15-year-old and an 85-year-old, other pro-lifers have been attacked. (See this 2018 video where a man delivers a roundhouse kick to a pro-life worker. Or read this article about a bomb threat in 2019.)

For good reason, I fear that this is only the tiny tip of a massive iceberg. And I fear that irresponsible rhetoric, like that of Senator Schumer, could endanger the lives of judges, legislators, sidewalk counselors  and other pro-life workers.

Again, I despise the fact that, over the years, pro-life extremists have decided to take the law into their own hands, even killing abortion providers. In the strongest possible terms, I denounce such acts of violence.

But, to repeat, this does not represent the millions of peaceful, law-abiding pro-lifers, as is evident from the speeches delivered at the annual March for Life in D.C.

Show me one speech that called for violence. Or that issued threats. Or that provoked irrational acts.

Or take me to one major pro-life website that encourages physical attacks of any kind.

Those in leadership on both sides of the debate need to watch their words carefully. Otherwise, there could be blood on their hands too.

Then, contrast that with the spirit of the anti-Kavanaugh protests. Or with the rhetoric of Senator Schumer. What is coming next?

I do understand that abortion is a tremendously volatile issue.

Pro-lifers are convinced that babies are being slaughtered in the womb (that is my view), leading some to unjustifiable acts of violence of their own.

Pro-abortionists believe that society is trying to take over their own bodies and force them to live by someone else’s moral code.

But one thing is sure (and I write this as a dogmatic and passionate pro-lifer). Violence is never the answer, and those in leadership on both sides of the debate need to watch their words carefully. Otherwise, there could be blood on their hands too.