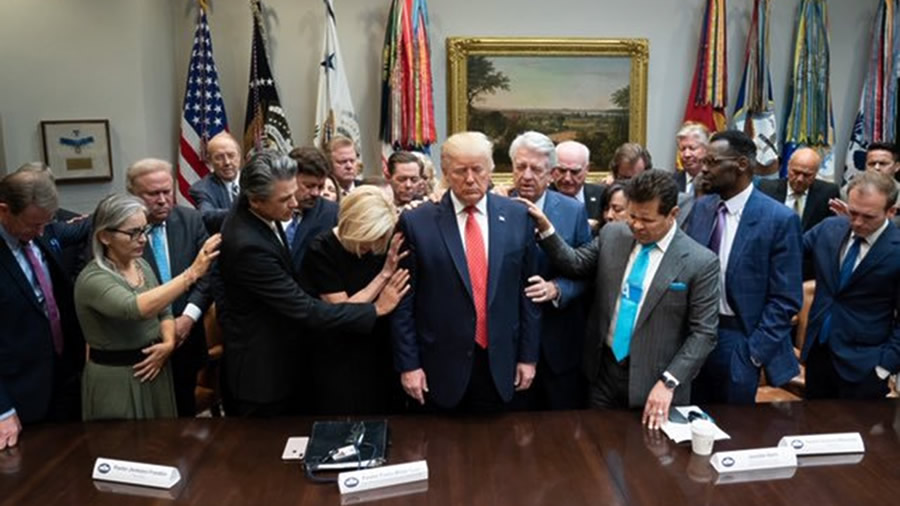 In a lengthy op-ed piece for the Christian Post, Chris Thurman claims that “evangelicals who support Donald Trump are being both blind and foolish to do so.” Therefore “labeling them as such is not sinful but appropriate and necessary.” Is there any truth to his charge?

How Can Evangelicals Continue to Support Trump?

Thurman explains that in using the word “support,” he “was not referring to evangelicals who voted for Trump in 2016,” even though he believes they erred in voting for him.

Rather, he writes, “I’m referring to those evangelicals who continue to hold Trump up as a great leader, say he is God’s chosen one for the presidency, applaud his appalling words and actions, ignore his glaring moral defects, and enable his dangerous presidency to continue by giving him their time, talents, and treasures.”

“Evangelicals who support Donald Trump are being both blind and foolish to do so.” — Chris Thurman

According to Thurman, they are supporting a man who is “morally ill beyond normal standards of human decency.”

He writes, “Given how narcissistic and sociopathic Trump is, he fundamentally doesn’t believe that the rules of moral behavior or social norms apply to him.” There was hope that, upon becoming president, he would change. But, “he has only grown more mentally and morally disturbed and defiant since assuming the powers of the presidency.”

Then, after raising a litany of serious accusations against Trump, Thurman quotes 2 Timothy 3:1-5. It’s a dire passage indeed. (Do read it when you have a minute.) He then concludes:

I believe this passage is almost a word-for-word description of our current president and that it’s not in the Bible by accident. I believe this particular passage was written for the very times we live in. God, being all-knowing, knew ahead of time this godless individual would ascend to the presidency of our country. In light of what the passage says, could God be any clearer about who He doesn’t want Christians to support when it comes to choosing a leader?

And so, he asks, “Given that Trump’s moral depravity has glaringly and dangerously been on display in public for three years now, how could any evangelical continue to support a man for president who is causing such great harm everywhere he goes?”

There is only one choice we have: “You foolish evangelicals, Trump has bewitched you. Stop calling him good when he is evil, light when he is darkness. Have nothing to do with him.”

My Response: Thurman is as Blind as He Says Others are

To be clear, I have frequently urged my fellow-evangelicals not to defend Trump when his words or actions are indefensible and not to sell our souls to him. And any reader of my columns knows of my book Donald Trump is Not My Savior: An Evangelical Leader Speaks His Mind About the Man He Supports as President.

These same readers will also remember how strenuously I opposed Trump during the primaries. And to this day, I have close and dear friends who would agree with many of the concerns raised by Thurman — and I’m speaking of committed evangelicals.

One respected friend insists that for evangelicals to preserve our testimony, we must find a conservative Republican to replace him. Another close friend who voted for Trump in 2016 plans not to vote at all in 2020.

So, I do understand the opposition to Trump and, to repeat, I was once part of it.

Yet as Trump defeated all his primary challengers, as unlikely as that seemed, and as solid Christian leaders began to support him, I said to myself, “I must be missing something.”

How is it, I wondered, that so many good people could be so duped? And what was it they saw in Trump, a man who was clearly not Christian in any serious sense of the word?

I felt like someone listening to a comedian telling poor jokes as the audience roared with laughter. At a certain point, you ask yourself, “Could it be that I’m not getting the jokes?”

To be sure, I cannot speak for Reed, Falwell, Graham, or Pence, nor do I want to. At times I have cringed at some evangelical defenses of the president. But I have no idea what these leaders say to him behind closed doors. I do not sit here as their judge.

At the same time, I’m looking at the bigger picture, and Trump really is engaged in some major, existential wars.

Flawed, But Fighting a Good Fight

Never before in my memory have we seen the depths of the DC swamp. Or the bias and even dishonesty of the media (on both sides, actually, but especially on the left). Or the blood-thirsty nature of the pro-abortion camp. Or the extreme radicality of the left (including the new push for socialism and the attempt to silence opposing ideas, even violently). Or the danger of the internet giants suppressing conservative voices and influencing elections.

This is what Trump is fighting. As flawed as he is, those of us who support him recognize that very few men would be able to withstand all this pressure without caving and compromising along the way.

Trump has also had a massive impact on the courts, to give just one important example of his major accomplishments. As Rolling Stone announced last month with some panic, “Trump’s Takeover of America’s Courts Just Hit a Terrifying New Milestone.

And while we pray for him and support him, he is not our savior or our example or our guide. He is simply our president. Those who hold this position are not bewitched in the least.

“Trump has now appointed one out of every four appeals-court judges — more than Obama did in eight years in office.”

This is already having a positive impact on some major life-and-death rulings, with a potential to positively affect the next generation. That’s why the Democrats have been talking about impeachment virtually since the day Trump was elected. As a Vanity Fair article from December 15, 2016 stated, “DEMOCRATS ARE PAVING THE WAY TO IMPEACH DONALD TRUMP.”

And as I write these words from India, I think of the significance of Trump standing with the protesters in Hong Kong. I think of his willingness to face down the giant that is China. That is massive.

Why Walk Out When He Has Left the Door Wide Open?

I also think of those evangelicals who are close to the president, appealing to him to urge India’s Prime Minister Modi to stand down in his persecution of Christians. (I’ll have more to say about this persecution in a forthcoming article.)

It is these same evangelicals who are in the president’s ear when it comes to a compassionate and righteous solution to the immigration crisis. They are also encouraging him to take further steps in prison reform. And they are applauding his economic policies. These policies are helping millions of Americans, including minorities.

As noted in a November 6, 2019 article at Bloomberg (did I say Bloomberg?), “Despite his reputation for being racially divisive, President Donald Trump’s approval ratings have drifted upward among nonwhites in the last two years. While it’s impossible to say exactly why, one reasonable explanation is that the U.S.’s long economic expansion has been particularly beneficial for minority workers.”

Trump has surrounded himself with evangelicals, both in his administration and in his circle of counselors. Why should they stop giving him input? Why on earth walk out when he has left the door wide open?

For many evangelicals, it is Trump’s very evident shortcomings that mark him as a man raised up by God. We see that: 1) his election was beyond unlikely; and 2) God delights in using fallen and flawed vessels.

But this hardly means he is beyond criticism (although some evangelicals, unfortunately, do feel that way). It simply means we see God’s hand at work in very positive ways in the Trump presidency while we recognize the potential damage he can do.

Ironically, Thurman rejects any possible notion that Trump is foreshadowed in the Scriptures. (Say, as a Cyrus figure, meaning a pagan king who did not know the Lord yet was chosen by God to help Israel.) Yet he claims that 2 Timothy 3:1-5 is written as a warning about Donald Trump.

That’s why I say that he is making the same mistake as those he criticizes, just from the exact opposite perspective.

In my view, there is healthy ground between these two extremes. This is what I have advocated for many months. The president gets our vote but not our soul. And while we pray for him and support him, he is not our savior or our example or our guide. He is simply our president.

Those who hold this position are not bewitched in the least. Our eyes are wide open and our head screwed on rightly.

For those who are bewitched on the left or the right, either with Trump-hatred or Trump-mania, I repeat: There is healthy ground between these two extremes. (For an interesting liberal perspective, see here.)