America Was Created by Citizens’ Militias Linked to Churches. Maybe They Can Save it Now 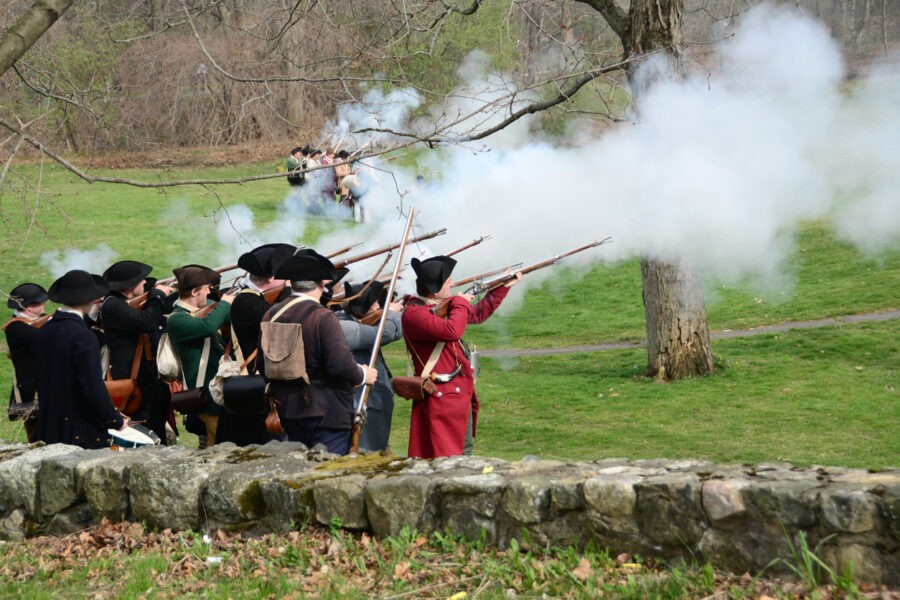 So Supreme Court justices who might vote to return abortion to the states are now targeted by leftist assassins, and Congress won’t act to protect them. Should we just leave them vulnerable, like storeowners during the George Floyd riots? Will we leave these justices to face mob violence pressuring them to change their votes? Will we throw up our hands and surrender?

I bet ten years ago you didn’t think America would be so much like Spain 1936, on the brink of a Christian persecution and a resulting civil war.

So what can we do about it? I suggest that citizens living near the D.C. area with experience using guns should organize citizens militias and patrol the areas around all nine Supreme Court justices’ homes. Yes, all of them, including our enemies on the court, whether they say they want us there or not.

If the State chooses to use Anarcho-Tyranny to hijack democracy, we must fight back while we can. Trust me, if honest citizens with AR-15s start showing up at these residences, the FBI will suddenly materialize. Its only purpose now is to suppress such opposition. Then at least law enforcement will have to patrol the justices’ homes. Are there enough Americans with the spirit and spine of Kyle Rittenhouse to prevent terrorists from shaping our constitutional law?

Does such talk sound crazy to you, even un-American? In fact, nothing is more American than citizens militias. Our country was settled then founded by such militias, many of them directly or indirectly linked to Christian churches. They don’t teach that in schools anymore, of course. They’re too busy teaching kids how to stuff money into the g-strings of prancing drag queens.

Militias Were America’s Backbone for More than 100 Years

But it is undeniably true. In my last historical piece on the roots of religious liberty, I explained how gun rights in the Anglo-American world are directly, causally linked to religious freedom. The provision which granted gun rights to British citizens (now sadly annulled) in the English Bill of Rights specified that “no Protestant” could be deprived of private firearms. This was a very practical response to the problem of Stuart kings targeting Puritans and disarming them as potential rebels against the Crown — leaving them potentially vulnerable to massacres by Catholics (as had happened in Ireland). For Protestants to feel safe in their practice of their religion, they needed private firearms.

In fact, this is true always and everywhere, as the tragic record of religious persecutions around the world reminds us. The English Protestants who settled the North American colonies brought with them the particular lessons of English history, and watched with great anxiety from across the Atlantic as the Stuarts tried to impose political absolutism and religious conformity.

The English Colonies and the Puritans

The colonies in New England, full of Puritans and other “separatists,” made open common cause with the Parliamentary faction that overthrew and beheaded King Charles I. On the Restoration, several of the judges who’d passed sentence on Charles fled to friendly colonies such as Connecticut and Virginia. The overthrow of James II as king in Britain was foreshadowed by the violent resistance to his arbitrary rule in New England.

After the coup that installed William and Mary, American colonies could point to the very legal basis for the new British monarchy as a guarantee of their rights. The legitimacy of the new dynasty rested on its adherence to the English Bill of Rights — not the hereditary rights of the Stuarts, who were in exile. The ideas and arguments of the Parliamentary faction, later called the Whigs, pervaded the Colonies. There were very few high-churchmen, Tories, or defenders of royal absolutism in the new settlements.

In the influential New England colonies, the founding of towns usually went hand in hand with the planting of churches. The defense of those colonies against Indian attacks and French incursions rested entirely for more than 100 years on citizens’ militias.

As David Kopel documents, the churches played a key role in organizing such militias, not just in Massachusetts but also in more comparatively Virginia. A regular theme of preaching in Protestant churches up and down the eastern seaboard was the moral and Christian duty of citizens to take part in such militias.

Men who were physically able were obliged not just by their neighbors but by God to defend their settlements against outside attack — and implicitly against any attempts by a hostile government to restrict their religious freedom, local autonomy, and rights as British subjects as guaranteed in 1690. Thousands of pages of such pastoral adjurations still exist, and many are compiled in political scientist Ellis Sandoz’s collection, Political Sermons of the American Founding Era. (Full disclosure: Sandoz was one of my professors in graduate school.)

Churches were typical gathering places for ordinary citizens to recruit, drill, and practice the use of weapons. American settlers saw their political and religious liberties as seamlessly linked to each other, and churches as natural sites for them to gather in their defense. When the British government attempted after the French and Indian War ended in 1763 to impose centralized rule and British taxes on the colonies, churches were the natural site for much of the resistance to organize.

A further defense of the rights of citizens in the face of absolute governments would arise in the writings of John Locke, whose work I will examine in the next installment of this series.

Protecting Religious Freedom Is the First Reason for Gun Rights. The Historical Record Is Clear