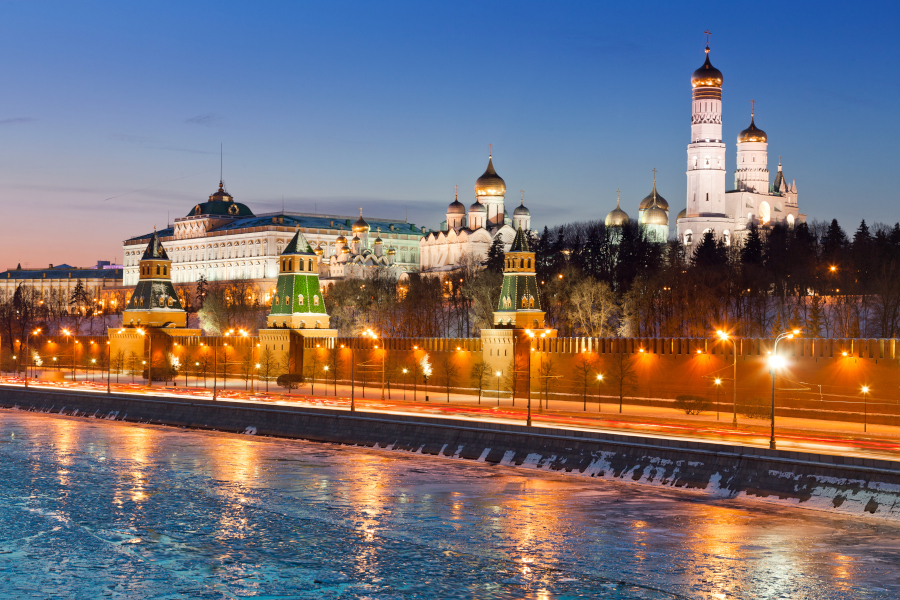 The Dormition Cathedral's onion domes inside the Kremlin, Moscow.

Joe Biden is being inaugurated today in an atmosphere of fear. He spoke fear in the second presidential debate, he displayed it by hiding all those “campaign” weeks in the basement, and the message is being multiplied a thousand-fold in the barbed wire and troops around Washington.

His message is fear, and his solution is in many ways to restrict freedoms. I have had experience with restricted freedoms, having spent weeks in China, Russia, and Cuba. Two stories from my Russia trips remind me never to fall for that fear.

I was there twice, in 1991 and 1992, doing literature distribution mission work with Josh McDowell Ministry. It was the perfect time and place for it. In 1991, communist Russia was finally talking glasnost and perestroika (openness and restructuring). Her citizens were eager to read anything not processed through a communist filter. On both trips about 300 Americans, Canadians, and Britons passed out hundreds of thousands of copies of Josh McDowell’s More Than a Carpenter, or, Ne Prosto Plotnik, as we would spell out the Russian.

Challenged by the Russian Mafia

My team of eight were in a subway station in St. Petersburg on the last day of the 1992 trip. A woman on the team came to me and said, “You need to talk to that man over there. He wants money.” He was in his early 20s, wearing scruffy jeans, looking generally unkempt. I approached, and he demanded, “You must pay me twenty American dollars!”

No explanation. Just, “You must pay me twenty American dollars or you must leave!”

Poor guy: he wasn’t prepared for my answer. “Why? Are you the police?” I knew he wasn’t, but it was fun watching his eyebrows shoot up in amazement. His only spoken response was an almost bewildered “No!” But his non-verbals said, “I can’t believe it. You are stupider than the stupidest American I’ve ever seen.”

I was fine with that; in fact, I pressed further in on it: “So, are you the militia?” Pity the young man. He had no idea it was going to go that way. His confidence visibly mixed with confusion, he spat back, “No! You must pay me twenty American dollars or you must leave!

Laughing at the Mafia

But I had my eye on the other members of our team. It was our last day, there, remember, and in fact we were running low on books to give away. Team members around the station were at the point of handing out the last of them. I wasn’t stupid, I was stalling, to give us those last few moments to finish up.

The last thing I asked him was, “Who are you, then?” He didn’t dare speak it too loudly, so he poured all his contempt, and all the intimidation he could muster, into an emphatic whisper: “Mafia!”

Our risk there was small, yet I would dishonor the truly suffering Christians to overlook the lesson they themselves had learned.

I wasn’t surprised; we’d been warned they might try to interfere. At that moment, though, my whole team had gathered behind him, showing me their empty book bags. I said brightly, “Okay. We’ll leave.”

I would never suggest it always comes out so cleanly and easily, but that day God was with us. I didn’t look back to see what effect our departure had on the fellow. I just laughed.

Praising God in the Kremlin 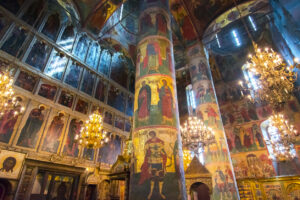 Inside the Dormition Cathedral, Moscow

My other story comes from the 1991 trip. Our group was doing a tourist stop in Red Square, where we discovered to our surprise that there are five cathedrals there. Two of them are on the square, one of them the glorious onion-domed St. Basil’s, brightly outshining the dour tomb of Lenin it overlooks. Even more surprising, three sit inside the walls of the Kremlin. The word “Kremlin” translates to “fortress inside a city,” and though this fortress includes the seat of Russia’s government, some of it is open to visitors.

So it was that on that summer day, a few hundred of us were standing inside the Dormition Cathedral (or Cathedral of the Assumption), right inside the Kremlin. Built in the 14th century and regarded as the “mother church” of Muscovite Orthodox Christianity, it was of course no more than a museum and tourist center under Soviet rule.

That bothered me. We were Christians. We were in a church. I noticed Bob Tiede, our mission’s operations leader, standing next to me. “We should sing a praise song,” I said to him. He encourage me, “Go ahead. Lead out!” Regrettably, I said, “I’m chicken.” (Those exact words.) He wasn’t. Bob started to sing, and soon hundreds of us picked it up and joined in:

It was the most beautiful praise song I’ve ever sung or heard. The cathedral’s acoustics were absolutely perfect for a choir, but that wasn’t what made the experience. It was that we were singing the Lordship of Christ right at the heart of one of the most anti-Christian regimes ever to rule a country.

Sharing the Gospel, Planting the Flag Again for Jesus Christ

It was only days later that Boris Yeltsin led a coup attempt against that government. On one level it failed; on another, it symbolized the end of Soviet communism. We had encountered Yeltsin briefly in Moscow’s domestic airport just before that. I shook hands with him, and one of our team members gave gospel materials to one of his people. I only wish he had paid it more attention.

Our hymn in the cathedral was short and, perhaps, merely symbolic. In my mind’s eye, though we were planting once again a flag for Jesus Christ in the Kremlin, for He was and still is Lord there, too.

Aleksandr Solzhenitsyn wrote that we must live not by lies. I would add this to that: Live not by fear.

Our risk there was small, for we could always leave, just as I was to do the following year, walking away from the mafia in the St. Petersburg subway. Russia’s suffering Christians couldn’t. I do not discount the huge difference that makes, yet I would dishonor them to overlook the lesson they themselves had learned. I have met with believers in more than one communist land, and I have seen their joy in spite of oppression. Would they have loved to experience our freedom? Of course. Did they love their Lord in the midst of their oppression? Absolutely!

Live Not By Fear

Today our federal government will complete its transition to Democratic control over the White House and the Congress. The shift puts leftist ideology in control of nearly all the country’s major power centers, and there’s nothing to stop them from packing the Supreme Court and gaining control there, too. Biden’s fear theme, from the second presidential debate through his long weeks in the basement, will be amplified a thousandfold in the barbed wire and militia surrounding his inauguration event.

I fully expect the left to continue manipulating fear to magnify their power. I refuse to let that fear get to me. It’s their tactic, not God’s. I’m not going to play it that way.

Aleksandr Solzhenitsyn, the most influential of Russian dissidents, wrote that we must “Live Not by Lies.” Rod Dreher picked up that theme for his most recent book. I would add this to that: Live not by fear.

I brought some great stories home with me from those two trips, but more than that, a life lesson. No matter what power plays the incoming regime may try to enforce, no matter what fears it may try to employ to justify it, I resolve to keep up my joy in Christ. I will remember He is Lord, that there is no place in the world where I cannot praise Him, and there is no need to fear. No matter what.

Tom Gilson (@TomGilsonAuthor) is a senior editor with The Stream and the author or editor of six books, including the recently released Too Good To Be False: How Jesus’ Incomparable Character Reveals His Reality — a book to show just how extraordinarily great Jesus is, and how He’s worth following no matter what.