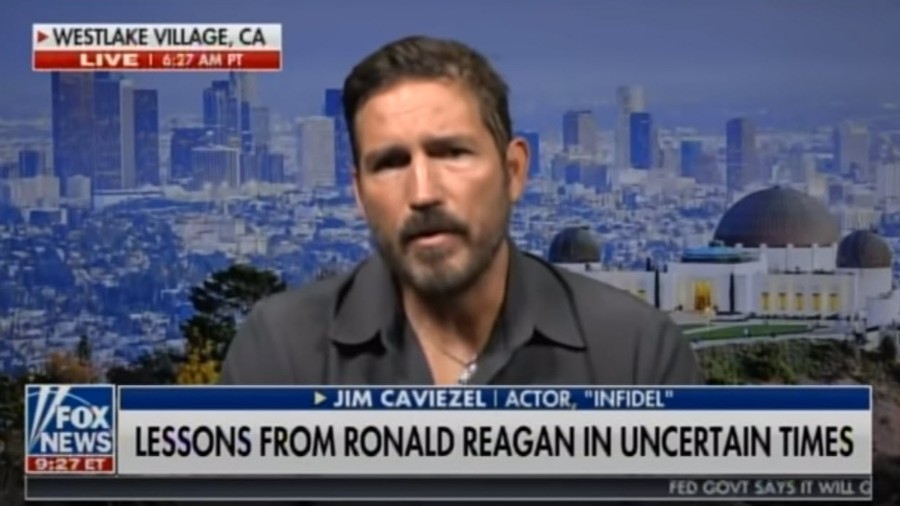 During an interview about his new film Infidel, actor Jim Caviezel launched into a nearly two-minute-long recitation of President Ronald Reagan’s famous 1964 speech, “A Time for Choosing,” adapted to emphasize that Christians should stand against violations of the right to worship freely in church.

Caviezel, who portrayed Jesus in The Passion of the Christ, discussed his starring role in Infidel in a Sept. 19 interview with Fox & Friends host Pete Hegseth. In the thriller, which released Sept. 18, an American journalist played by Caviezel is kidnapped in Cairo by members of the Iranian regime after saying Jesus is God. His wife goes to Iran to search for him and is helped by a group of underground Christians. In the interview Caviezel tied the meaning of the film not only to an awareness of the persecution of Christians in countries like Iran and China, but also to standing against restrictions on churches in the U.S. in response to COVID-19.

“People have taken their faith for granted, especially here in the United States. But now, with not being able to go to churches — which is a violation of our inalienable rights — we need to start standing up,” Caviezel said.

Hegseth then asked a question about what Americans today can learn from then President Ronald Reagan’s 1964 speech “A Time for Choosing.” Hegseth said it was a topic Caviezel “wanted to touch on.”

Seemingly prepared, Caviezel then recited a significant portion of the speech. Caviezel adapted Reagan’s words in several places, including adding the word “Christian” in the phrase “well-meaning Christian liberal friends” and adding “our priests, bishops, and pastors” right after that. He also changed “Nikita Khrushchev,” the then premier of the Soviet Union, to “Satan.”

That’s right. He said that. … Now also, he said: “Now, let’s set the record straight. There’s no argument over the choice between peace and war. But there’s only one guaranteed way you can have peace, and you can have it in the next second: Surrender.”

“Admittedly there’s a risk in any course we follow other than this, but every lesson in history tells us that the greater risk lies in appeasement. And this is a specter our well-meaning Christian liberal friends — our priests, bishops, and pastors — refuse to face: that their policy of accommodation is appeasement.”

“And it gives us no choice between peace and war, only between fight and surrender. If we continue to accommodate, continue to back and retreat, eventually we will have to face the final demand, the final ultimatum. And what then? When Satan has told the people of this world, he knows what your answer is going to be. He has told them that we’re retreating out of the pressure of his cold war, and someday, when the time is right to deliver his final ultimatum, our surrender will be voluntary. Because you see by then we will have been so weakened from within spiritually, morally, economically.”

“He believes this because from our side he’s heard voices pleading for ‘peace at any price,’ or ‘better red than dead,’ or as one commentator put it, he’d rather ‘live on his knees than die on his feet.’”

“And therein lies the road to war, because those voices don’t speak for the rest of us. You and I know it, and do not believe that life is so dear and peace so sweet as to be purchased at the price of chains and slavery. If nothing in life is worth dying for, when did this begin? Just in the face of this enemy? Or should Moses have told the children of Israel to live in slavery under the pharaohs? Should Christ have refused the cross? Should the patriots at Concord Bridge have refused to fire the shot heard around the world? The martyrs of history were not fools, and our beloved dead who gave their lives to stop the advance of the Nazis did not die in vain.”

“Where then lies the road to peace? Well it’s a simple answer after all: that you and I have the courage to tell our enemies ‘there is a price we will not pay,’ ‘there is a point beyond which evil must not advance.’” In the words of Reagan, “evil is powerless if the good are unafraid.”

For the full effect of the actor’s dramatic reading, watch here:

Conservative political commentator Dan Bongino highlighted Cavizel’s answer on The Dan Bongino Show on Sept. 21, saying it gave him goosebumps and labeling it “one of the most powerful things I’ve seen on TV in a LONG time.” After playing the clip, Bongino seemed stunned for a moment and then said, “Wow.” “Folks, this fight’s coming — for all of you,” Bongino added. “I’ve warned you it’s gonna knock on your door.”

When We Still Can’t Go to Church, There is Good News