According to Gov. Newsom, the Baby in the Womb is Not Our Neighbor 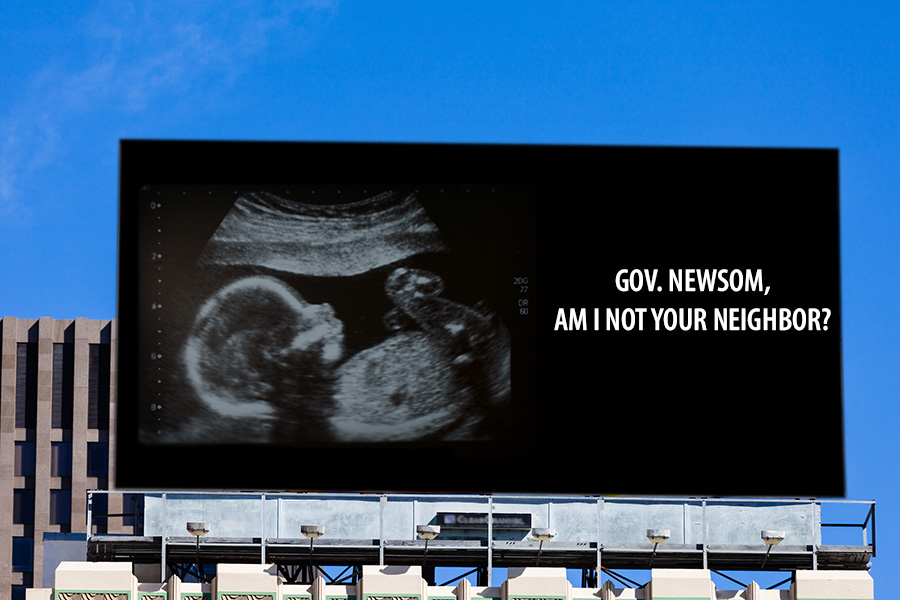 Governor Gavin Newsom is not simply pro-choice. He is pro-abortion, to the point that he tweeted last month, “Just launched billboards in 7 of the most restrictive anti-abortion states that explain how women can access care–no matter where they live. To any woman seeking an abortion in these anti-freedom states: CA will defend your right to make decisions about your own health.”

Newsom, in fact, is a pro-abortion radical, as evidenced by the pinned tweet on his account. It states, “Abortion is legal in California. It will remain that way. I just signed a bill that makes our state a safe haven for women across the nation. We will not cooperate with any states that attempt to prosecute women or doctors for receiving or providing reproductive care.”

Tragically, it appears that his views are quite popular. The tweet currently has one million likes.

Where was this billboard posted? Oklahoma, sometimes referred to as the buckle of the Bible belt.

As for those blasphemous billboards, an effective counter campaign could depict a baby inside the mother’s womb, plaintively asking Gov. Newsom, “Am I not your neighbor?”

So, this demented logic would say, “If you’re dealing with lots of Christians, you need to quote the Scriptures.”

Talk about a misuse of the Word of God. Talk about butchering the Bible.

As pro-life leader Marjorie Dannenfelser exclaimed, “This makes me sick. Gavin Newsom quoting Scripture (‘Love your neighbor as yourself’ – Mark 12:31) in his billboard going up in Oklahoma today advertising California as an abortion tourism destination. Simply no words for how twisted this is.”

Newsom has now drawn the ire of Pastor John MacArthur who sent an open letter of rebuke to the governor, calling for his repentance.

It begins with these words: “Almighty God says in His Word, Righteousness exalts a nation, but sin is a disgrace to any people (Proverbs 14:34). Scripture also teaches that it is the chief duty of any civic leader to reward those who do well and to punish evildoers (Romans 13:1–7). You have not only failed in that responsibility; you routinely turn it on its head, rewarding evildoers and punishing the righteous.”

In mid-September, you revealed to the entire nation how thoroughly rebellious against God you are when you sponsored billboards across America promoting the slaughter of children, whom He creates in the womb (Psalm 139:13–16; Isaiah 45:9–12). You further compounded the wickedness of that murderous campaign with a reprehensible act of gross blasphemy, quoting the very words of Jesus from Mark 12:31 as if you could somehow twist His meaning and arrogate His name in favor of butchering unborn infants. You used the name and the words of Christ to promote the credo of Molech (Leviticus 20:1–5). It would be hard to imagine a greater sacrilege.

And, speaking personally and directly, Pastor MacArthur writes, “My concern, Governor Newsom, is that your own soul lies in grave, eternal peril,” urging him to repent and find salvation in Jesus. And, he notes, “Our church, and countless Christians nationwide, are praying for your full repentance. Please respond to the gospel, forsake the path of wickedness you have pursued all your life, turn to Christ, ask for forgiveness, and use your office to advance the cause of righteousness (as is your duty) instead of undermining it (as has been your pattern).”

This is what you call gospel rebuke, providing an excellent example of a leading pastor interfacing with politics.

It is not about Republicans versus Democrats. It is a matter of an elected official defiantly sinning in the face of God, using the Bible to back his cause. And this is the same Gavin Newsom who, when mayor of San Francisco, illegally issued marriage certificates to same-sex couples.

“Am I Not Your Neighbor?”

As for those blasphemous billboards, an effective counter campaign could depict a baby inside the mother’s womb, plaintively asking Gov. Newsom, “Am I not your neighbor?” That would say it all.

Right now, in the name of loving your neighbor, Newsom is bringing the blood of the innocent on California.

May God grant him repentance, forgiveness, and a transformed new life where his fearless zeal can be used for good rather than for evil. And may Christians throughout the state awaken to righteousness and declare, “Not on our watch!”

By a miracle of divine intervention, California may one day become a sanctuary for life.