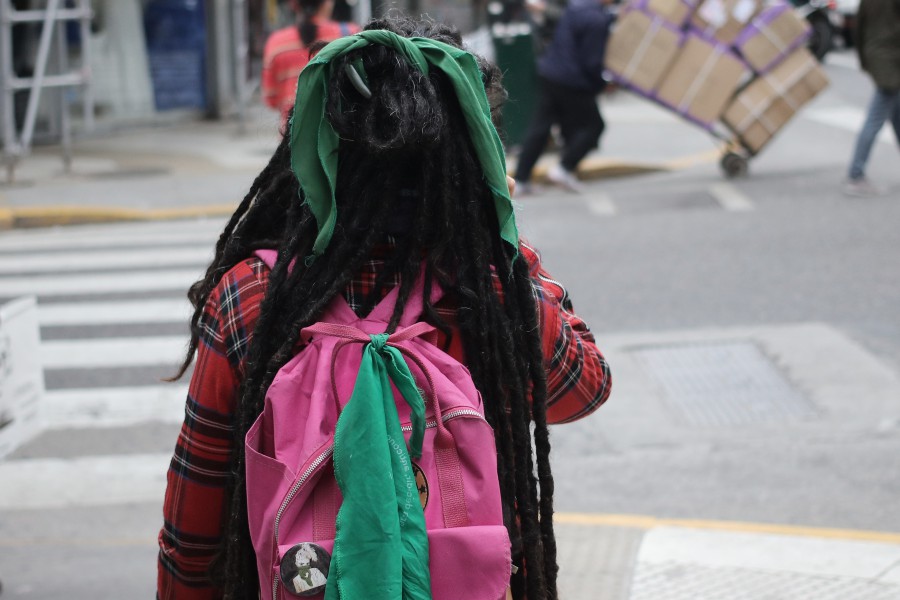 A woman in Buenos Aires, wearing and carrying a green kerchief, the symbol of Agentina's pro-choice movement.

It depends on who gets disappeared. The “grandmothers of the Plaza de Mayo” had worn white headscarves when they risked their lives to protest the Argentinian dictatorship’s disappearing of their grandchildren, writes Ella Whelan in Spiked!. Argentina’s pro-choice movement chose as its symbol green scarves, which she called “a moving nod” to those brave women.

The country’s legislation just approved abortion until the fetus is fourteen weeks old and in special conditions after that. Public hospitals will provide abortions for free. The world’s pro-choice movement cheered. A large, nominally Catholic Latin American country had essentially chosen a liberal, secular view of things over Christianity’s. The New York Times declared it “a milestone in a conservative region.”

The generals who overthrew the government in 1976 (with America’s support) tried to suppress any opposition. They didn’t just harass or imprison dissenters. They took them away and murdered them. It was called the “Dirty War.” Dropping them into the sea from airplanes was a method they enjoyed.

For more on abortion, see David’s Joe Biden’s Not ‘Truly Pro-life and Mercy-Killing Five Year Olds. For more on pro-choice arguments, see Look Out, Pro-Choicers, You’re in Danger and My Angry Pro-Choice Critic Called It Lying. He Was Wrong.

Their families never knew what happened to them, or even knew if they were alive or dead. The dictators acted brutally even for dictators. The mothers and grandmothers in their white scarves risked their own lives to demand news of their children. They kept it up for decades, because even after the dictatorship fell, the government hid the story.

The major news sources left out the fact that the majority of Argentinians opposed the law. It was less an expression of the popular will and more the effect of very organized, focused movement.

Spiked! is a libertarian site. It was created by a once hard left academic named Frank Furedi. He’d founded the Revolutionary Communist Party in the 1970s, which was as batty as it sounds. He drifted right over the last couple decades.

Furedi’s actually a very interesting sociologist. The patriarch of conservative thinkers, the late Roger Scruton, has written admiringly of his writing. Stream readers would appreciate and often agree with most of the site’s articles. It speaks up for liberty and denounces almost anything a government does to restrict it.

But Furedi has a darker side. Or rather, a darker better half. His wife Ann runs BPAS, the euphemistically named British Pregnancy Advisory Service. It’s the British equivalent of Planned Parenthood and the major abortionist in Great Britain. In her writing for Spiked!, she treats legal abortion as a necessity and a good. It’s “an obvious, easy-to-access solution for a crisis pregnancy,” she writes.

Her 2016 book The Moral Case for Abortion argues as sophisticated a case for “terminating a pregnancy” as you’ll find. She sees the problem. “Denuded of a focus on values based on individual freedom,” she writes, pro-choice movements risk “social engineering.”

Furedi engages the objections, though I don’t think she sees their force the way she should. She does treat the main objections as “based on faith and doctrine,” which pro-choicers use as a way of pushing the objections out of the debate. Faith and doctrine mean “sectarian.” It doesn’t matter how many times pro-life people note that we object to killing because it’s killing.

Furedi’s case depends, as such cases must, on giving the pregnant woman a greater right to do what she wants than giving the unborn child a right to live. “Women do not have abortions to demonstrate their philosophy or to make a statement,” she writes in a recent article on Spiked!.

These women “avail themselves of a clinical procedure to end their pregnancy because they do not feel it is right to have a child. To deny a woman access to a safe, legal means of abortion is to cause her real harm.” Women need the right to abortion to have “autonomy and self-determination,” she writes in her book.

And that claim depends, as it must, on treating the unborn child as less fully human than his mother. After telling how she explained to her four-year-old son that sheep don’t know they’re going to be turned into a meal, she writes: “Not all lives are the same and not all minds are the same. … It is human knowing, about situations and ourselves, that shapes our thoughts and feelings and fears — and makes us the persons we are.”

In her article, Whelan argues that the new Argentinian law doesn’t go far enough. It still restricts abortion. She has the same view as Furedi. “Legalising abortion only under certain conditions is always going to be a block on women’s freedom,” she writes.

“Decriminalising abortion, on the other hand, is the only way to grant women full autonomy over their bodies.” She wants the government to treat abortion “like any other medical procedure.” That “would grant women the ability to make full and free decisions about when and if they want to become mothers.”

And that is how you disappear children. You just don’t talk about them. At least for long. You depersonalize them, un-personize them, as Furedi does.

Then, as both Furedi and Whelan do, you shift the conversation to the mother, as if the unborn child was just something she had to deal with. It’s a medical problem that should treated with a medical procedure. In no substantial way different than a cyst or a tumor.

Finally, as both writers do, you do this to serve an abstract goal, treated as an obvious necessity. They don’t need to ask who is being aborted. Only the goal matters. Freedom requires bodily autonomy which requires abortion. That, for them, is that.

This is how, despite its name, Human Rights Watch can call the Argentine vote “a gigantic victory that protects fundamental rights and will inspire change in Latin America.” Because the children who will lose their lives have been disappeared.