ABC Killed Incriminating Story on Jeffrey Epstein; Plus Anchor is Sure He Was Murdered 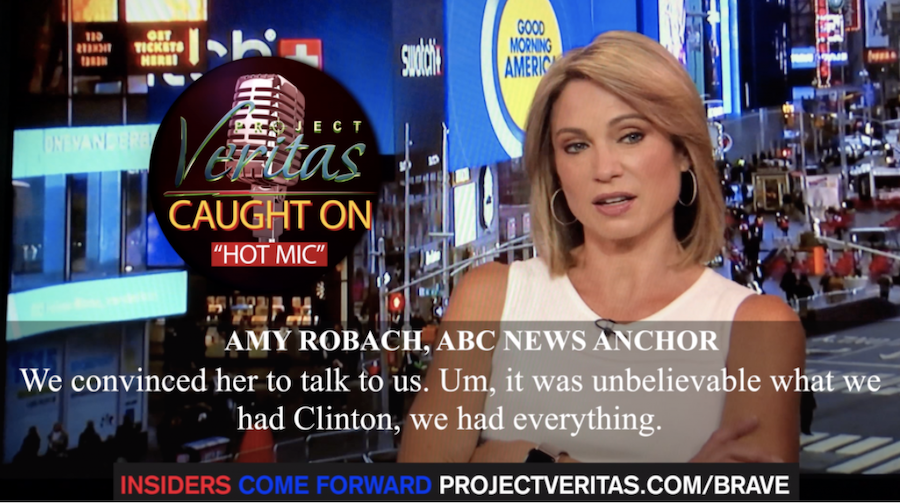 By Rachel Alexander Published on November 6, 2019 •

Project Veritas has just released a video revealing that ABC had a story three years ago on his sexual preying on underage girls. The network killed it.

Good Morning America co-host Amy Robach was recorded in August on a hot mic complaining about it to a producer. She’s also the network’s breaking news anchor. An anonymous insider at ABC gave it to Project Veritas.

The anchor continues, frustrated, “I’ve had this story for three years. … (ABC) would not put it on the air. I tried for three years to get it on, to no avail. And now it’s all coming out and it’s like these new revelations and I freaking had all of it. I, I’m so ****** right now.”

Why the Interview Didn’t Run

ABC’s first excuse for canning the interview was that it wasn’t a story. The network said, “Who’s Jeffrey Epstein? No one knows who that is. This is a stupid story.” Then more details began coming out.

“…[T]here will come a day when we will realize Jeffrey Epstein was the most prolific pedophile this country has ever known.”

She reveals a prophetic statement purportedly made by Giuffre’s attorney Brad Edwards. “There will come a day when we will realize Jeffrey Epstein was the most prolific pedophile this country has ever known.”

Next, Robach addresses Epstein’s alleged suicide. “So do I think he was killed? A hundred percent, yes I do. Because do you want it? He made his whole living blackmailing people. Yep. There were a lot of men in those planes, a lot of men who visited that island, lot of powerful men who came into that apartment.”

She went on, “And they made it seem as though he made that ‘suicide attempt’ two weeks earlier. But his lawyers claim that he was roughed up by his cellmate around the neck, that was all like to plant the seed.”

Robach discusses Epstein’s female accomplice next. “Ghislaine Maxwell, who I had all sorts of stuff on her too. She knows everything. She should be careful,” she says. Robach’s worried about her. “She went out and recruited all of these girls. She should watch her back. ‘Cause if she goes, I mean, I’d like have security guards all around me.”

Since the video was released, ABC and Robach have issued responses. ABC said that the reporting did not meet its standards. It “never stopped investigating the story” with “substantial resources.” It says the station will be airing a two-hour documentary and a six-part podcast on Epstein next year.

Robach said her remarks were made in “a private moment of frustration.” She also repeated the network’s line. “I was upset that an important interview I had conducted with Virginia Roberts didn’t air because we could not obtain sufficient corroborating evidence to meet ABC’s editorial standards about her allegations.”

Is that true? As Fox News points out Robach said, “It was unbelievable what we had, (Bill) Clinton, we had everything.” This was during the 2016 election. Did ABC kill the story to protect the Clinton’s during the campaign? Further, notes Fox News, Robach’s colleague George Stephanapoulos is a former top Clinton aide. Not only that, he attended a party at Jeffrey Epstein’s after the pedophile was released from prison.

Project Veritas suspects the story was killed to protect the rich and powerful. They are going to continue digging to determine who at ABC killed the Epstein story and why. The interview still has not aired.