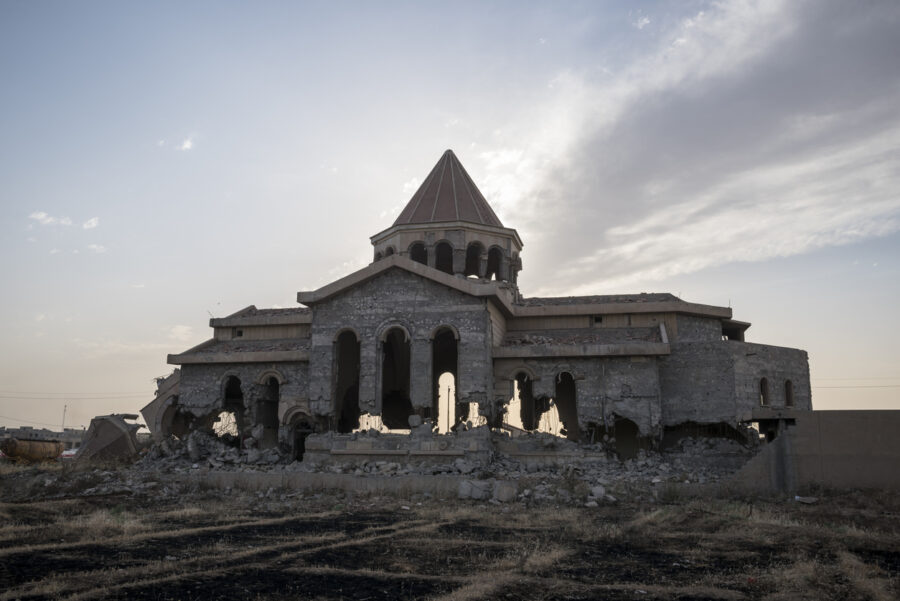 By Raymond Ibrahim Published on December 2, 2022 •

An important archaeological find was recently announced, though — and because it involves Islam — its significance is being altered.

Archaeologists in the United Arab Emirates recently unearthed the ruins of a Christian monastery. Radiocarbon dating suggests that its Christian community may have thrived there as early as the year 534 — meaning nearly a century before the rise of Islam in 622 AD (year one of the Muslim calendar).

“It is an extremely rare discovery,” said Prof. Tim Power of the UAE University, who was part of the team that unearthed the monastery. “It is an important reminder of a lost chapter of Arab history.”

To be sure, historians have long known that both Christians and Jews lived throughout the Arabian Peninsula prior to the advent of Islam, though having archaeological backing is obviously good. This is, moreover, the second such monastery to be unearthed in the UAE. All in all, six ancient monasteries have thus far been discovered along the shores of the Arabian Gulf.

‘People of the Book’ Were Swallowed Up and Islamized

Ultimately, these findings confirm that what happened to the Arabian Peninsula is what happened to the broader Middle East and North Africa. In the seventh century, the entire region was overwhelmingly Christian majority. Once the jihad against the People of the Book (Christians and Jews) was proclaimed, circa. 630, all of these formerly Christian regions were swallowed up and Islamized. In the words of Bernard Lewis:

We tend nowadays to forget that for approximately a thousand years, from the advent of Islam in the seventh century until the second siege of Vienna in 1683, Christian Europe was under constant threat from Islam, the double threat of conquest and conversion. Most of the new Muslim domains were wrested from Christendom. Syria, Palestine, Egypt, and North Africa were all Christian countries, no less, indeed rather more, than Spain and Sicily. All this left a deep sense of loss and a deep fear [emphasis added].

The finding of monasteries in the Arabian Peninsula is further unsurprising when one considers how utterly Christian the Middle East was. According to John Cassian, a Christian monk from modern-day Romania who visited Egypt about two-and-a-half centuries before the Arab invasion, “the traveler from Alexandria in the north to Luxor in the south would have in his ears along the whole journey [about 600 miles on foot], the sounds of prayers and hymns of the monks, scattered in the desert, from the monasteries and from the caves, from monks, hermits, and anchorites.”

Today, Egypt, which, prior to its invasion and subsequent conquest by Islam, was, by way of population and influence, arguably the most Christian nation in the world, has only a very few monasteries, and these remain under attack.

That an even worse fate befell the Christians of Arabia seems to be self-evident. After all, Muhammad himself singled out the Peninsula on his deathbed when he ordered that “There are not to be two religions in the [Arabian] Peninsula.” This has always been interpreted to mean that only Islam can be practiced on the Peninsula (hence why modern day fatwas continue to call for the destruction of any church found in the Peninsula).

‘A Monument to Tolerance and Multi-faith Society’ — Really?

Despite this, the recently unearthed monastery is being cited as — you guessed it — “a monument to tolerance and multi-faith society.” As the report relays,

The find also sheds light on a time when Christianity and Islam coexisted and reveals more about the Christian Arab population that went on to thrive in East Arabia…..After the rise of Islam, Prof. Power said there was a period of about 300 years where the two religions coexisted.

Really? In fact, the first three centuries of Islam — when most of its conquests took place — were, as mentioned, remarkably violent. The centuries-long record is irrefutable; and monasteries were among the first to be attacked and plundered.

Even so, “a narrative of violent conquest doesn’t work,” says Power, because “There was no sign of devastation or violence or burning. There was incremental cultural and social change as Christianity faded out and Islam became dominant. It is a monument to tolerance and multi-faith society.”

And there you have it. Despite the fact that contemporary historical records make clear that monasteries, churches, and entire Christian regions were, in the name of jihad, wiped out or brutally subjugated over the centuries, in this case, the Christian population seems to have “faded out” peacefully. Why? Because “there was no sign of devastation or violence or burning” to the building.

According to this “logic,” because no signs of violence appear on a building — 14 centuries after the fact — its inhabitants must have been treated great. This is tantamount to telling a battered housewife that her testimony is no good because, after all, police found no signs of violence or burning to her home.

News flash to Power: all sorts of nasty things, including violence and outright slaughter, can be inflicted on a people, without any telling signs appearing in their residence — especially when the inspection occurs 14 centuries later.

So much for common sense. All that apparently matters here is that something has been found that, after much straining and sophistry, can make Islam look good.