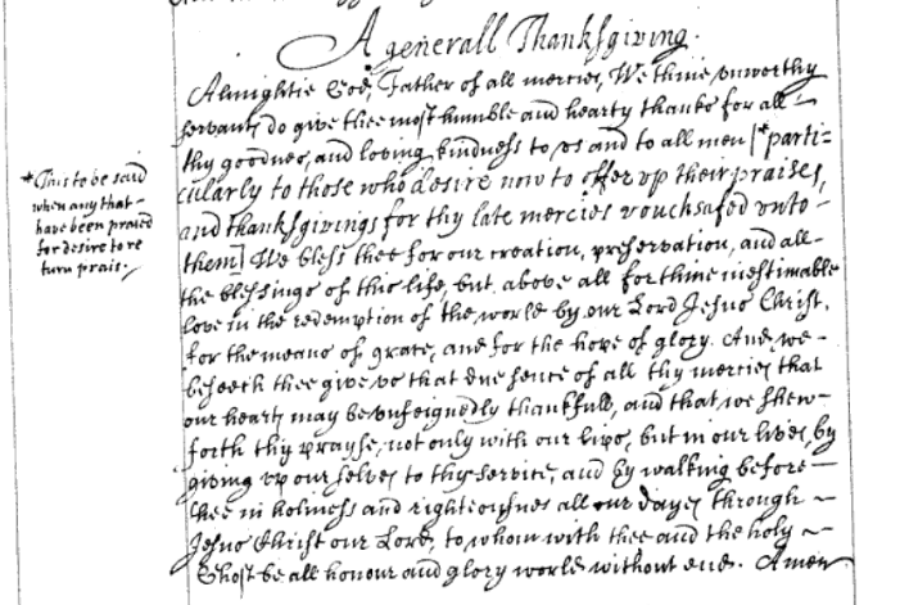 A facsimile of the original handwritten manuscript of the Book of Common Prayer published in 1662.

The young men, G. K. Chesterton writes, were “lightly tossing about that pessimism which is only possible in the happy time of youth.” Life was bad, existence a burden, and so on. Precisely the kind of thing you can say when you’re comfortable and happy and secure. They “were criticising the General Thanksgiving in the Prayer-Book,” he explains, “and remarking that a good many people have very little reason to be thankful for their creation.”

Notice that they thought other people had little reason to enjoy being alive. They knew they should enjoy life, but others, not so much. Being affluent Englishmen of the 1890s, they would likely have meant the poor, and racial minorities, and people in other countries, especially brown and black-skinned ones. And probably Americans too.

But Christianity tells us the opposite. Everyone should be thankful for his creation. In its classic Book of Common Prayer, the Church of England has supplied a very good prayer that begins with that very point — the prayer the young men were blowing off for being (as they thought) unrealistic.

A Prayer For All

It’s a beautiful prayer. It’s a prayer to be said by any Christian, rich or poor, black or white, English or other. Here’s it is:

Almighty God, Father of all mercies, we, thine unworthy servants, do give thee most humble and hearty thanks for all thy goodness and lovingkindness to us, and to all men; We bless thee for our creation, preservation, and all the blessings of this life; but above all, for thine inestimable love in the redemption of the world by our Lord Jesus Christ; for the means of grace, and for the hope of glory. And, we beseech thee, give us that due sense of all thy mercies that our hearts may be unfeignedly thankful; and that we show forth thy praise, not only with our lips, but in our lives, by giving up our selves to thy service, and by walking before thee in holiness and righteousness all our days; through Jesus Christ our Lord, to whom, with thee and the Holy Ghost, be all honour and glory, world without end. Amen.

It’s also rich in meaning and worth meditating on. Notice how it begins, acknowledging that God is almighty and our Father and a merciful Father at that. The God who can do anything wants to do us good. It adds that we are his servants but aren’t worthy to be so. But that’s good news. Even being servants means we have been chosen and given a great honor, especially because we don’t deserve that much. Serving a merciful Father means service, not servitude. We’re servants learning to do with joy and freedom what we are created to do, not slaves. His service is perfect freedom, as an ancient prayer puts it.

We then thank God for everything He’s done for us, and not just us, but everyone else. As we might put it today, in four words the prayer expresses a deep sense of human solidarity, that we’re all this together, so much so that we can thank God for the good He does other people. That’s not a little thing, in a world that tries to divide people and set us at each other’s throats.

The prayer then lists what He’s done. First he created us, and preserves us. We owe our lives to Him, and as I wrote earlier, that means He loves us and will do everything He can to help us, including the death of Jesus on the Cross. We owe our lives to him at every second. Moment by moment He’s watching us, caring for us.  We’re in the palm of his hand, as the psalmist tells us. That’s something we don’t always remember, at least I don’t.

While He’s keeping us alive He’s blessing us with all sorts of blessings. Including the means of grace, primarily the Church, the Scriptures, the sacraments, but also blessings like the care and fellowship of other believers. This part of the prayer ends thanking God for the hope of glory. It all points to Heaven. We don’t live as those who no hope, as the Apostle Paul told the Thessalonian Christians. Our lives move to a new world which makes everything right.

The prayer then turns — in only the second sentence! — to describing what we thankful creatures want, or should want. First, and foundationally, that we see God’s great mercy clearly enough to be completely thankful. We’ve just thanked Him, but our saying thanks doesn’t mean we’re really thankful, or that we see why we should be thankful. We ask for his help in not holding anything back, not keeping any of the credit for ourselves.

That leads straight to living as people who know God’s mercy and praise Him for it. In our words, yes, but even more importantly in the way we live. This includes, I think, not just what we think of as religious lives, but the way we treat others, especially the least of these. We pray to serve Him all out, holding nothing back, giving up our selves. Doing that means living holy lives and living righteously.