The longer I observe Woke activists in action (see this previous column on a feminist professor trying to wipe out sexual reproduction), the more I think they are consciously or unconsciously working toward a world devoid not just of humans, but multicellular life.

How Far Could Wokeness Take Us?

They probably won’t achieve that. Most ideologies fall well short of hitting rock bottom on the slippery Gadarene slope. They prove unliveable for long enough, and people just reject them (as in Russia). Or they burn themselves out, and provoke their neighbors to strike back and conquer them (Hitler’s Germany, Pol Pot’s Cambodia). But Wokeness has longer legs than most atrocious worldviews. As a cancerous mutation of Christian ethics, infused with Marxist chromosomes, it really might sweep the world.

What if it did? Imagine that the Woke ideology clung to power not for 4 years but for 50. That it spread via Facebook, Google, and other satraps of Mammon beyond the post-Christian West. Just picture:

Pretty quickly, Wokeness would collapse, along with the last remnants of organized society. After all the wars and famines reduced the population by 90% or so, the last survivors would revert to hunter-gatherer societies.

On the plus side, each tribal band in this Mad Max future would be free of obesity and heart disease. This thanks to their solid “paleo” diets, and the fact that nobody remembered how to plant crops or herd sheep and goats. In the minus column, literacy would have disappeared, along with Netflix and Uber.

Still, since not just multi-cellular life, but mammals and even humans would still walk the earth, the Woke agenda would have mostly failed, like ideologies before it.

Are you still with me? Good. Now picture these tribesmen and women — there would only be two sexes again, with outliers who cross-dressed either worshiped as gods or killed as witches — roaming through South Dakota. After a weary but fruitless bison hunt conducted with spears and arrows, a band emerges on a clearing. It looks up at a mountain that’s shaped very strangely.

Two of the shamans who read the omens for this tribe begin debating what the mountain is, what it might mean, and how it came to exist. The two men have different worldviews, as emerges in their debate. To indicate that, let’s call them after the thinkers of our own time whom they most resemble. Shaman #1 we’ll name after materialist biologist Richard Dawkins (“Dawk”). The second shaman we’ll christen after intelligent design scholar Stephen Meyer (“Mey”). 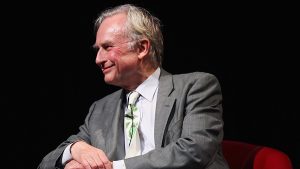 DAWK: What a fascinating rock formation. Positively eerie, one might even say. By an extraordinary coincidence, the mountain bears a resemblance to a series of human faces.

MEY: A really remarkable likeness. One or two of them seem hauntingly familiar. That one on the left, for instance… . Isn’t that the same face we see on the most common bill of ancient American currency? 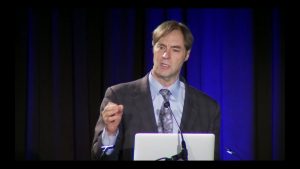 DAWK: I will grant your point. Our predecessors on this continent likely modeled the fictional figure on their currency after the enigmatic figure they fancied they saw on the rock.

MEY: Doesn’t it seem odd to you that there are several such remarkably humanoid forms, all in a row, in a single place?

DAWK: It’s a marvelous instance of nature’s creative power. Don’t try reading any of your superstitious Creationist mumbo-jumbo into this.

MEY: I’m not. I’m simply saying that these figures don’t seem like the result of random erosion.

DAWK: All of nature, received wisdom tells us, bears the illusory traces of what appears to be Design. But in every case, the role of Science is to uncover the real mechanisms that produced such intricacies. Doubtless, there is some unknown force that winnows out the fittest mountain shapes from the less fit shapes. The result being that we see the best, most highly developed mountain figures, and falsely attribute to them some prior “Designer.”

MEY: Isn’t it more reasonable to infer that wherever we see some object that looks like an artifact, that’s highly improbable and irreducibly complex, it’s the fruit of prior, intelligent Design?

DAWK: I really must insist that you stop fomenting superstition and dogmatism, unworthy of our advanced state of knowledge. You’re spreading a closed-minded attitude that might well sow division, and lead us back to the Dark Ages. If you cannot control yourself, I shall be forced to denounce you as a sorcerer to the Chief. Do you really wish to be ritualistically sacrificed, then eaten?

DAWK: Then let us agree that this magnificent discovery of nature’s creative power is simply that. Our commitment to methodological materialism must stay intact. We cannot allow a Divine foot in the door. And anyone who says otherwise is a piece of meat for the menu. Now tally ho, hunters! I think that the dark spot up ahead might be a moose… .

For more on the confrontation between Darwinist dogmatism and the persistent, convincing arguments raised by Intelligent Design thinkers, see Stephen Meyer’s groundbreaking bestseller, Darwin’s Doubt, and the follow-up from the Discovery Institute, Debating Darwin’s Doubt.