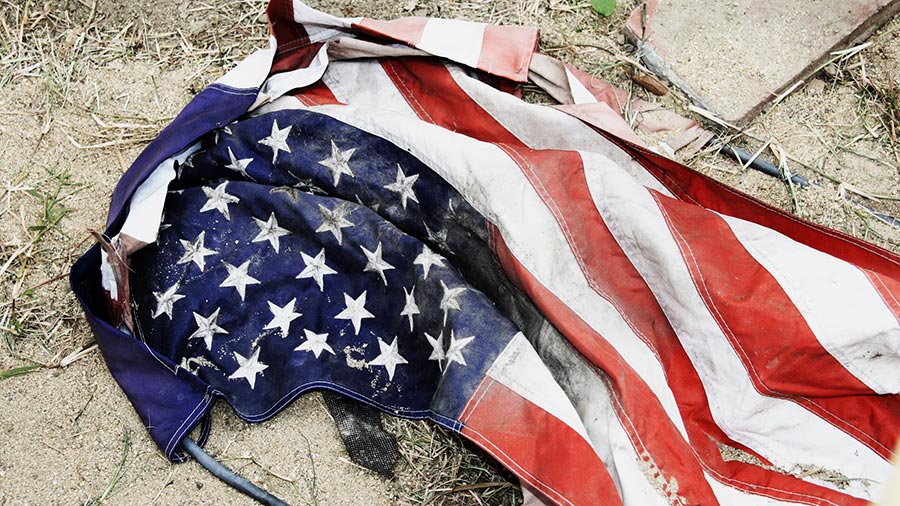 Since my sons were in middle school, I’ve been telling them there may not be a United States when they hit 30. (One has now graduated from high school. His brother will next year.) Watching the news, I may have been too optimistic. Righteous protests over the killing of George Floyd by a brutal cop deteriorated into looting sprees. Then would-be revolutionaries in Antifa and Black Lives Matter began burning businesses and beheading statues. They even chased the police out of a Minneapolis police station. Self-styled insurrectionists in Seattle have now declared a “Capitol Hill Autonomous Zone.” Meanwhile, the mayors of those cities, and their states’ governors, cower in fear. President Trump receives more criticism from local Democrats and the media for decrying the situation than the perpetrators.

Where are the national Democrat leaders? Putting on African scarves and publicly kneeling. A more serious politician, Senator Tom Cotton (R-AR), wrote a NY Times editorial adducing the Insurrection Act. Using the military to enforce the law has been done 20 times. Twelve times by Democrat Presidents. But the Left erupted. The paper even forced the approving editor to resign. Even mentioning the Insurrection Act “proved” — for the umpteenth time, it seems — that Trump is a “dictator” and “fascist.” Democrat candidate Joe Biden agreed. He accused the President of trying to “steal the election.” And that he would “refuse to leave the White House” if he lost.

The US: Best, But Not Perfect

How far away are we from the show trials and mob rule of The Dark Knight Rises? Not very, it seems. At least in the likes of Seattle, Minneapolis and some other places run by craven Democrats. But probably not here in Georgia. Or Texas. Or just about any red state. And if that means those of us in flyover country wind up parting ways with the Marxist margins — well, so be it.

A democracy is always temporary in nature; it simply cannot exist as a permanent form of government. — Alexis de Tocqueville (or perhaps Alexander Tytler)

I know that in many ways the American system of government is the best in history. For 231 years it’s gotten increasingly better at those things spelled out in the Constitution’s Preamble. Establishing justice. Insuring domestic tranquility. Providing for the common defense. Promoting the general welfare. Yes, we had to kill 600,000 Americans in the 1860s to keep the progress going. (Someone remind BLM of that). Our ancestors did form a more perfect Union than has ever existed.

But the most perfect Union? No. Such will never exist on this planet, short of Christ’s Second Coming.

A little known but brilliant mid-20th century scholar is instructive. C. Northcote Parkinson wrote The Evolution of Political Thought in 1958. (The Preface is available here.) His thesis is that history is cyclical, not linear, when it comes to political systems. Riffing on Plato and Aristotle, Parkinson believes types of government move from monarchy to aristocracy then democracy. Democracy always dies, maybe not in darkness. Sometimes it expires in the light of day. But it will devolve into anarchy, only to be replaced by some form of dictatorship. Which in turn institutionalizes into monarchy. And the cycle begins anew.

History Has Not Ended

We like to think that history ended with the collapse of the USSR. That the West is the best, with our democratic republics. But “there is no historical reason for supposing our present systems of governance are other than quite temporary expedients.” (Parkinson again.) Athenians thought their (male-only) democracy the epitome of government. Spartans prided themselves that their checked-and-balanced dual monarchy was best. Citizens of Rome’s Republic knew better. But then, so did the ones in Carthage, where they sacrificed babies to their gods. (Until the Roman Republicans, seeing them as their North African nemesis, destroyed them.) Emperors, if not their subjects, always thought the same — whether Roman, Persian, Chinese or Byzantine. Ditto for kings and queens, of whatever nationality.

We have been taught to think that rule by the many is the only moral choice. That would have been disputed by the legions of civilizations — a majority, in human history — in which one or only a few persons held the levers of power. Remember, Christians, that our faith long pre-existed the American Republic. And who’s to say it didn’t prosper better in Justinian’s Eastern Roman Empire? Or Charles V’s Holy Roman one? Maybe even in Russia under the Czars, or for that matter Putin?

Is the Clock Ticking?

I don’t think the US will collapse. But the fact that I even have to write that sentence shows how much things have changed since 1991, or even 2001. It might. One paradigm says democratic systems last an average of 200 years. So says Alexis de Tocqueville (or perhaps Alexander Tytler): “A democracy is always temporary in nature; it simply cannot exist as a permanent form of government.” Parkinson is harder to pin down. He thinks civilizations last for a millennium, on average. But that they change political systems throughout that time frame. So if, broadly speaking, there are four major types of governments, that gives each roughly 250 years. Which means the clock is ticking on America’s democratic phase.

What comes next, if that’s true? Does the country balkanize into regional states, as an ex-KGB analyst predicted a decade ago? Maybe there are more logical alignments for the US (and Canada) than what we have now. Or does the US stay one polity, but slide into one-person rule? Such could be of the Left or the Right. Remember how the Roman Empire came about. The late Republic suffered through horrible dislocations, including insurrection and eventually civil wars. Dictatorship, which was originally a temporary expedient, turned into an imperial system. The French did much the same in the late 18th century, although they compressed the process into years, not decades. Don’t think we are immune.

Do It For the Children?

But all one-person rule is not fascism, despite what the ill-educated leftists may screech. Britain has been a democratic system with a monarchy for centuries. Monarchy does not equate to tyranny. And, as noted above, the Christian faith has often fared well under kings and emperors. Most of us would miss the Republic, and rightfully so. But if it can no longer secure the blessings of liberty to ourselves and our posterity — what good is it?