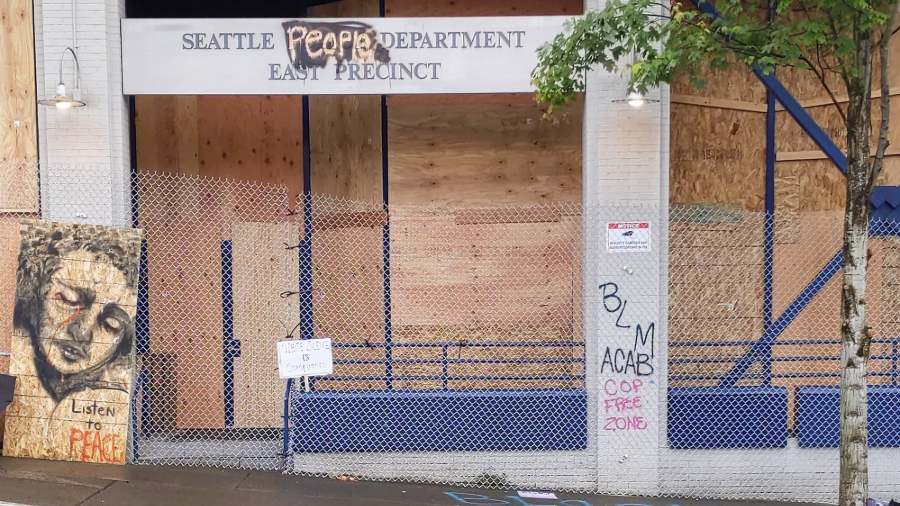 Antifa and other radical militants have sectioned off a six-block area of downtown Seattle, creating their own ‘autonomous zone,’ with armed guards and entry points. They’ve even given it a name: The Capitol Hill Autonomous Zone (CHAZ).

And the officers of the East Precinct give them the streets, abandoning their station. (And the businesses left hostage.) Seattle’s mayor yawns. Washington’s governor insists he doesn’t know anything about it.

But they sure are upset President Trump is tweeting about it.

The “hard-Left secessionist movement,” as Seattle’s City Journal dubbed it after a week of “pitched battle” with Seattle police officers and National Guard soldiers. Police had set up a barricade around the Seattle Police East Precinct. Let the local reporter Christopher F. Rufo describe what happened next:

Hoping to break through the barricade, protesters attacked officers with bricks, bottles, rocks, and improvised explosive devices, sending some officers to the hospital. At the same time, activists circulated videos of the conflict and accused the police of brutality, demanding that the city cease using teargas and other anti-riot techniques.

Then, in a stunning turn of events, the City of Seattle made the decision to abandon the East Precinct and surrender the neighborhood to the protesters. “This is an exercise in trust and de-escalation,” explained Chief Carmen Best. Officers and National Guardsmen emptied out the facility, boarded it up, and retreated. Immediately afterward, Black Lives Matter protesters, Antifa black shirts, and armed members of the hard-Left John Brown Gun Club seized control of the neighborhood, moved the barricades into a defensive position, and declared it the Capitol Hill Autonomous Zone — even putting up a cardboard sign at the barricades declaring “you are now leaving the USA.”

When asked Wednesday about radicals taking over part of his state’s largest city, Washington Gov. Jay Insee denied knowing a thing about it.

“Well that’s news to me so I’ll have to reserve any comment about that,” Inslee said, with all the sincerity of a snake oil salesman. “I have not heard anything about that, from any credible source. Not that you’re not credible, just before I espouse an opinion I should know of which I speak.” As Brandi Kruse noted. It had been in the news for a full 24 hours.

Speechless. Washington @GovInslee claims he’s unaware that protesters have taken over nearly 6 city blocks in Seattle and dubbed it an autonomous zone, rendering an entire @SeattlePD precinct useless. It’s been trending nationwide on Twitter. It’s been more than 24 hours. https://t.co/BhpwXlCbEH

Seattle’s Mayor Jenny Durkan was busy. On Tuesday, protesters stormed city hall. And the first thing they did was demand Kurkan resign if she didn’t defund the city’s police department.  There are reports the leftists are extorting $500 from the businesses in the CHAZ.  But with a chunk of her city barricaded like East Berlin, Durkan’s response Wednesday was to tweet about police body cameras.

You can guess President Trump’s reaction. He’s furious at violent militants declaring part of a major U.S. city their own while local officials twiddling their thumbs. He tweeted “Take back your city NOW. If you don’t do it, I will.”

Radical Left Governor @JayInslee and the Mayor of Seattle are being taunted and played at a level that our great Country has never seen before. Take back your city NOW. If you don’t do it, I will. This is not a game. These ugly Anarchists must be stooped IMMEDIATELY. MOVE FAST!

Oh, that got a reaction. Durkan told Trump to “Make us all safe. Go back to your bunker.” (Trump’s actually heading to Dallas for a roundtable on actually solving the problem of racial equality and police reform.) Inslee tweeted, “A man who is totally incapable of governing should stay out of Washington state’s business. ‘Stoop’ tweeting.”

So to understand: Insurrection, ignore. Tweets from Orange Man, attack!

Michael Sloan, president of the Seattle Police Officers Guild, says the city leadership has “lost all the political will to enforce the rule of law.” He told Laura Ingraham Wednesday night, “There is an unreasonable activist trench that is, unfortunately, stealing the peaceful protest message for justice for George Floyd.”

Let’s stop here to take a quick look at what 18 U.S. Code § 2383 says about “Rebellion or Insurrection”: “Whoever incites, sets on foot, assists, or engages in any rebellion or insurrection against the authority of the United States or the laws thereof, or gives aid or comfort thereto, shall be fined under this title or imprisoned not more than ten years, or both; and shall be incapable of holding any office under the United States.”

The radicals who have taken siege of Seattle aren’t just in it for the coffee. They’ve got demands beyond abolishing the Seattle Police Department. Yes, abolish. That’s at the top of their list, for those of you insisting “Defund the police” means “Reform the police.” They’ve listed 30. It’s said to be from the “collective black voices.” (Though the unhinged white guy screaming at a Fox News reporter doing a live report “Who do you work for?! Who do you work for?” is one indication that rage, not race is the real voice behind it.)

Here’s some of the greatest hits:

“We demand (italics theirs) a retrial of all People in Color currently serving a prison sentence for a violent crime, by a jury of their peers in the community.”

“We demand autonomy be given to the people to create localized anti-crime systems.” (Our Translation: We will create our own armed force to deal with citizens who do not bow to our demands. Do you know what we call chopping the heads off statues? Training.”)

“We demand that between now and the abolition of the SPD that Seattle Police be prohibited from performing “homeless sweeps” that displace and disturb our homeless neighbors, and on equal footing we demand an end to all evictions.”  (We mention this because on Wednesday, one of the CHAZ occupiers tweeted out the need for food because the homeless they invited in stole all their food.)

“We demand the hospitals and care facilities of Seattle employ black doctors and nurses specifically to help care for black patients.” Yes. They are calling for segregation. They might as well tear down Martin Luther King’s statue because it might topple over from shock all on its own.

And on and on.

Seattle Police Department says they want to get officers back to work inside the East Precinct. According to Q13 Fox, SPD, “along with other city agencies are working to identify and engage with protester leadership to move towards resuming operations at the facility.” Assistant Chief Dianna Nollette told the station she wants to come to an agreement with protesters so officers can return to the precinct because service has cut back.

Perhaps Nollette should read the manifesto. A great percentage of the demands from the armed thugs controlling the area around East Precinct building assume the end of the SPD. Besides how often in history does “May we please have our police station back?” work?

Nollette added, “Right now, we are on priority calls only which means people citywide who need a police response are not receiving it. That to us is just not acceptable.”

Not to police, perhaps. But apparently, it’s just fine with the liberal politicians controlling the city and state. God help the good citizens of Seattle.

Meanwhile, Portland radicals are already trying to set up their own “autonomous zone.”