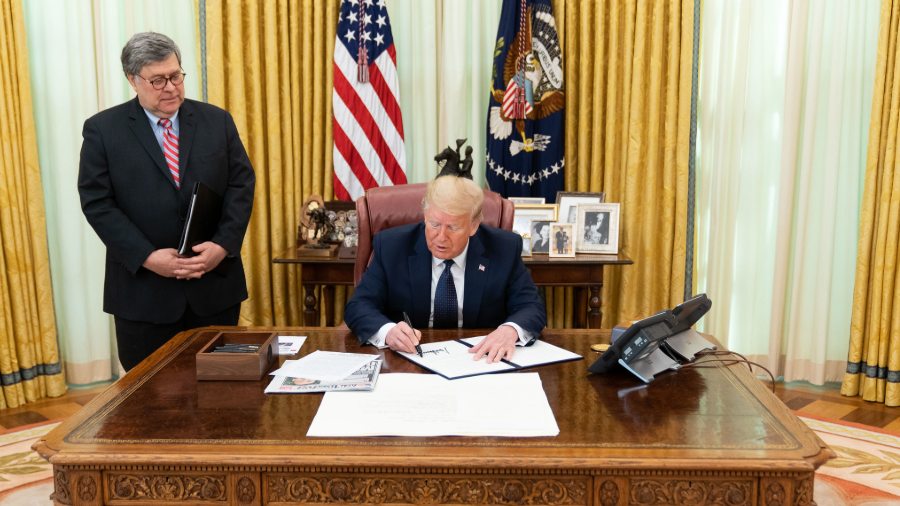 President Donald Trump issued an executive order Thursday to help protect the abilities of common people to express themselves freely on social media.

Of course, that is not how the story is being played by many in the media. The Guardian and a host of other newspaper and media outlets are accusing the president of trying to “punish Twitter.” They are casting the story as a Johnny-come-lately personal vendetta by Trump against a social media platform he constantly uses and which he feels turned against him.

But Is That What It Really Is?

Ironically, it seems to this internet guy (since the early ’90s) to be just the opposite. The entire executive order and the controversy swirling around it center on the Communications Decency Act of 1996, in particular, Section 230. And though I am not a lawyer, I have something of a history looking at the law in question to back me up. I’ll tell you some of that story shortly.

But first, we need to take two steps back. What is this really about?

Many conservatives, especially those speaking out openly in social media, on YouTube and in other online forums, have watched censorship grow for several years now. Increasingly, large social media platforms have been hiding and even deleting posts that are not following what “they” see as correct thinking. After the 2016 election and its (to them) ‘disastrous’ results, several internet social media giants ostensibly began an increased effort to reign in “fake news” and “Russian trolls” on their platforms. Gradually this has evolved into a creeping, selective censorship of individual views, particularly from conservative posters, few of whom speak Russian and many with solid facts.

Most of those affected are not large media journalists or even new media conservative outlets. They are, rather, common people like you and me who have dared to speak up consistently on public platforms. We experience such things as being thrown into “Facebook Gulag” (affectionately so-called), being “shadow banned” on Twitter, or being demonetized on YouTube. Many of the censored posters have spoken out on subjects that 50 years ago would not have been questioned by anyone, such as pro-life issues, same-sex marriage and the right of business owners to follow their consciences.

For example, in the Twitter case, President Trump was speaking out on Twitter about the dangers inherent in using mass mail-in ballots, hardly debatable even 10 years ago. Twitter put up a “fact check” warning on the post, in essence editorializing on his point.

Therein lies the rub. Twitter, Facebook, Google and other internet platforms have long been assumed to be “neutral platforms.” The idea is to allow all people, small and great, to publish their thoughts and opinions without editorial comment from the platform that hosts the discussion. Of course, debate and challenges to posts and comments are allowed, but by other users, not by the platform providers.

The Difference Between Platforms and Publishers

People assume that the internet is by nature “neutral.” But it is not. That neutrality has been enforced by law, specifically the 1996 Communications Decency Act, Section 230.

There are two parts to this law. 1) Online media fall into one of two categories. Either they are “platforms,” or they are “publishers.” If they open up comments and posting to all comers, they are a platform. If they edit, select or deselect user content, they become (like newspapers and traditional media) publishers. 2) Publishers are, and always have been, legally liable for what they choose to publish. Since they have editorial power, if they choose to allow a rumor or libel to go up, they can be sued.

The idea was that platforms, on the other hand, since they were allowing free expression and content to be posted, without editing or cherry-picking, should be free from liability. They are, in effect, just a platform for commenters of any stripe to use to put their messages out. They are, by nature, neutral.

I was hired as internet director for Capital Gazette publishing in Annapolis in 2006. We were the publishers of five Maryland newspapers and of the Washingtonian magazine in D.C. One of my jobs was to open up public commenting on the website of our flagship paper, The [Annapolis] Capital. Landmark Publishing, part-owners of The Capital and owners of 20+ newspapers in the eastern states, made sure that I was properly trained on the legal aspects of running a comment platform.

I was briefed extensively on Section 230 in this way. At the time, I was told, it was important to recognize that the courts interpreted the law to hold that a newspaper, forum, bulletin board or any other online forum was not legally liable for comments made by other people and allowed by the newspaper only if we did not edit or cherry-pick them. A couple years later, when I was doing post-graduate work in journalism at Georgetown University in Washington, I attended a seminar held by lawyers on the same thing, Section 230. Their statements were similar: Stay neutral. Let everything go up except what is overtly against rules of decency, threats, etc., and you should be safe. If you start editing, you become liable. You may get sued. That was 2008.

The Gist of the Executive Order

Thursday I watched President Trump’s speech on the executive order and listened to Attorney General Barr’s explanation as well.

His speech was not about a personal peeve with Twitter. It was about correcting the stretching of the interpretation of current law, Section 230. After he spoke, Attorney General Barr made the statement that this order is an effort to get back to the “original interpretation” of the law. He also stated that it is an effort to put some rules around the enforcement of it, which he stated have been “stretched” too far. They were setting forth a way for the FCC to look at putting clearer “rules” around the enforcement of the existing law.

What Happened to the 2006 Interpretation?

As I mentioned, all the legal people I heard from in the 2006–2008 era seemed to agree. Platforms could not edit and could not censor, with the sole exceptions of lewd, libelous or threatening comments. Even in those areas, the lawyers told us, we had to have clearly posted terms on the platform. As a caveat, they did mention that this was the “current interpretation of the law.” At the time, I did not pick up on the ominous sound of those last words.

Somewhere between 2008 and the present, things got twisted around. Section 230 started to be taken as a new kind of big press freedom (as opposed to freedom of speech for the common man and woman). The emphasis shifted from freedom for you and me to use internet platforms without editing or censorship to freedom for large social media platforms from legal liability. Their view conveniently tries to separate the two sections of the law and apply them individually, emphasizing the freedom of the platform-publisher and diminishing the freedom of the citizen-writer from censorship.

That is turning the intent of original law on its head. The reason internet platforms were allowed freedom from liability was to ensure that neutral platforms which could not afford a legion of lawyers could even exist. (You may remember — once Facebook was a small platform, as were Twitter and YouTube.) The law was also put there to ensure that bloggers could exist, since the blog’s host site, as a platform, wouldn’t be responsible for their content. By extension, it was put there to ensure that Facebook posters (my personal blog is there) and Twitter tweeters, such as you and me, could exist. Without censorship. Speaking freely.

Somehow in the mix, it is now seen by many, especially in media, as a law that frees up social media giants from legal liability, even while allowing them creeping, editorial rights which no newspaper or broadcast media outlet has had for 100 years.

President Trump and the attorney general say it is time to get back to the original intent. Far from being tyrants threatening to “sue social media giants and target them,” they are trying to get social media companies to be accountable to the purpose for which they exist in the first place. And for this they are being criticized as government officials petulantly trying to sue successful media companies in spite.

There is a War Going on in Media Now

There is a gigantic war going on in media and everyone knows it. A central battle in that war is the ability and the availability of platforms for regular people to speak out, loud and clear, on all sides of critical issues. America’s founders emphasized again and again it would take that to survive as a republic. They had their public squares — and we have ours.

The social media giants are simply platforms for us, the American people. They exist so that we can express our viewpoints with free speech and be active in the marketplace of ideas.

If they want to become publishers like more traditional media, they are free to do that. But when they do it, they need to take their place in the courtrooms with their newspaper and broadcast brethren when they try to manipulate the news. And they need to be prepared for the mass desertion of followers who will go elsewhere to seek a place to exercise their freedom of speech and opinion.

America has found its voice. We will not surrender it.

Alan Eason is a writer and digital media and marketing analyst. He served as webmaster and Inspiration editor for The Stream for its first two years.