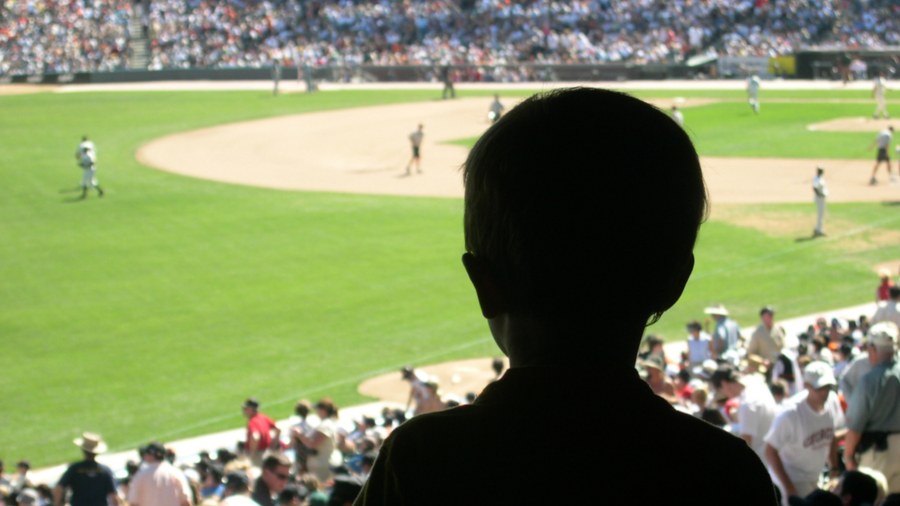 Baseball enchanted me when I was 5 or 6 years old. I remember my father instructing me, “If you’re going to follow baseball, you need to have a favorite team.” It must’ve been in 1968, because I picked the Detroit Tigers, despite living in Southern California. They were actually good that year and would go on to win the World Series. Of course, that would be the last time they would get to the series until 1984, and after that not till 2006.

From then on, baseball consumed the bulk of my thoughts every year from mid-spring, through summer, and into the fall. Baseball not only had my attention, but changed my mood. A Tiger victory could send me soaring, while a loss could ruin my day.

Such it is with all great love affairs, and so it was with me and baseball. We weathered the slumps, rain-outs, and off seasons for thirteen years like newlyweds. Still too enraptured with each other to notice any faults.

It is said that break-ups come out of the blue, but upon reflection, one can see the signs were always there.

The first sign was in 1972, when the lockout cancelled a handful of games, but I was still too young to grasp the implications. The next three baseball strikes took place in 1973, 1976 and 1980. As no actual games ended up being cancelled, it was easy to overlook these indiscretions. In 1981 however, things would change.

The season started like any other, with hope, expectation, and spring in the air. But by June, our love would suffer a major set-back. The years of ignoring the licentious greed of owners and players finally stabbed me in the heart. This time, the strike resulted in over a third of the games being cancelled.

I was devastated. Baseball has a sixth-month offseason. More than enough time to negotiate a viable contract. But who suffers during a baseball strike? Certainly not the owners. Owning a baseball team is a vanity, something that people who have made their riches in other areas engage in. The loss of revenue doesn’t affect them. How about the players? Perhaps. A little. But their minor sufferings will eventually be compensated for with new, higher paying contracts.

Who’s left? The fans. We, who love the game, who spend six months longing to see the game, we are the ones who get hurt. And, what’s more, we are the ones who foot the bill. The fan is where the revenue comes from. Whether in the form of television dollars or actual ticket sales, we pay for baseball. To deny us our time with her shows the actual contempt baseball feels for us. This was why baseball and I broke up, the first time.

The next two years, I didn’t even think about baseball. In 1984, however, reports of strange doings started finding their way to me. I heard my beloved Tigers had opened the season with a 9-0 record. One of the best of all time. Later in the season, whispers reached my ear that after 40 games, they were 35-5, one of the top ten best starts in all of baseball history. By August the gossip was the Tigers would cruise effortlessly to the play-offs.

While this news tugged at my heart, I still could not forgive baseball that easily. I wanted to see my Tigers playing well, but to let an unrepentant baseball back into my life was unthinkable. I came up with a compromise. I would watch the playoffs, and, God willing, the World Series, after which I would never again watch another game of baseball.

This was the plan. Unfortunately, as John Lennon said, “Life is what happens to you while you’re busy making plans.” In 1985 I met the woman who was to become my wife. As luck would have it, she was a huge baseball fan. Her love for the sport rekindled my passion, and the three of us had a magnificent relationship for almost a decade.

I should have known it was the act of purest optimism to think this perfect life could last. Sure enough, in 1994 came the ultimate betrayal. A strike so brutal it would lay waste to my image of baseball forever. The damage was so irreparable that the World Series was actually cancelled. Cancelled!

In 1989, just before the start of game three of the World Series between the San Francisco Giants and the Oakland Athletics, a 6.9 earthquake ripped through the Bay Area. It destroyed part of Candlestick Park (home of the S.F. Giants at the time) and actually collapsed the bridge connecting the two cities to each other. And still, they finished the World Series!

Baseball and I divorced in 1994. On the rare occasion I feel like forgiving baseball and rekindling our relationship, baseball manages to do something stupid, reaffirming my decision to have no part of it. Such past discretions have been things like interleague play and the addition of the wild card to the postseason. But what happened at the beginning of this season may very well have put the final nail in the coffin.

Pulling the All-Star Game out of Georgia because of the new voter protection laws is a pathetic and irresponsible attempt at virtue signaling. A classic example of symbolism over substance.

A Good Law, a Racist Response

It is a good and necessary law. Everything being reported about it by President Biden and most of the Main Stream Media has been a lie. The lies are so obvious that even the Washington Post gave Biden four Pinocchios for his claim that the law slashed poll hours and early voting. The Atlanta-Journal Constitution printed a retraction for its original lie-filled earlier article.

Baseball, every time I gaze upon you, you’ve become more tarnished. You’re not the sport I have loved since childhood. You’ve done enough damage. Stay out of politics!

George Janek is a conservative thinker encamped in Northern California. His previous article for The Stream was Reasonable Democrats Must Speak Up. But Are There Any?.