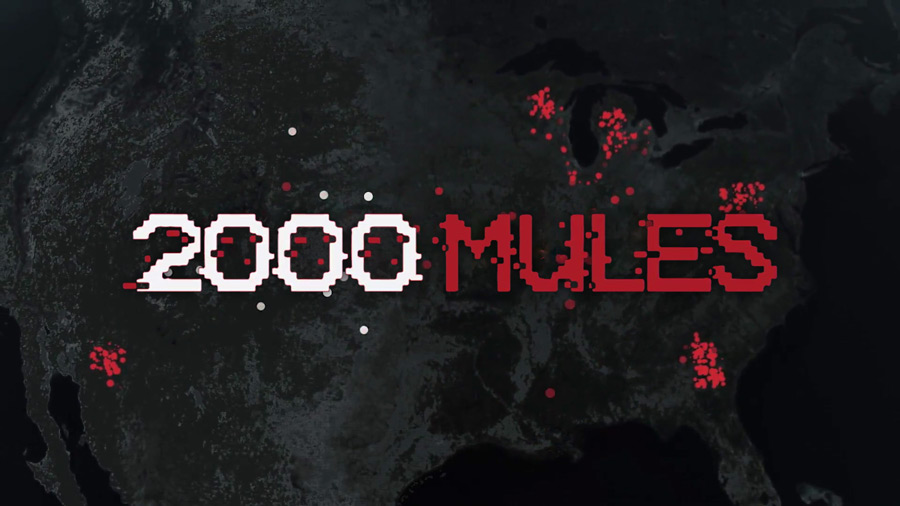 Ready for the weekend?

We’re kicking it off with a special Brew on 2000 Mules.

Now Playing at a Theater Near You

Already the most successful documentary film in a decade, 2000 Mules will open in roughly 400 theaters nationwide this weekend. As much as I’d love me some Downton Abby: A New Era, the Crawley family can wait. The American Family needs to see this movie.

See here for theaters and times.

Writer-producer Dinesh D’Souza says the call for a wide release for the movie came from theater operators themselves.

With the success of the movie, everyone talking about the movie, a lot of independent theaters began to call us, “Hey, why didn’t we have this movie in the theater?” And we were like, “You know what? This is fantastic.” A lot of our people love to see the movie in groups, love to see it in the theater. In fact, we’ve been bombarded with people trying to organize groups.

But the key is getting people who think the 2020 election was on the up-and-up to see it.

I’ve Been Under a Rock or Watching the MSM, What’s It About?

2000 Mules documents to an indisputable degree the massive, illegal effort in the swing states to stuff those Zuckerberg-funded ballot drop-off boxes with hundreds of thousands of Biden ballots. The film uses cellphone geo-positioning data to trace the paths taken by 2000 of the busiest stuffers, as they went from box to box, making pit-stops at left-wing political organizations to restock with ballots.

To eliminate the possibility the person tracked just happened to wander past ballot drop-boxes in the course of a day, D’Souza and True the Vote set up strict criteria: To register as suspect, the person had to make at least 10 stops to at least five NGOs which served as “stash houses” for the ballots.

True the Vote also got 4 million minutes of surveillance footage. The movie matches up the geo-positioning with video of the mules actually stuffing the ballots. Sometimes in the middle of the night. Often taking photos of each ballot … proof for their paymasters that they carried out their task. One Mule in Atlanta dropped ballots into 28 different collection bins.

Enough votes were harvested and illegally stuffed for Biden to steal re-election victory from Donald Trump, and a square election from the American people. Some 380,000 votes.

Specifically, Trump won Pennsylvania, Georgia and Arizona, which would put him over 270 Electoral votes. If you slightly loosen the standard to qualify as a Mule from 10 trips to 5 and NGO stops from 5 to 3, Trump sweeps all the swing states.

Which, not incidentally, would be consistent with both history — an incumbent gaining 12 million votes — and the relative levels of enthusiasm for the candidates.

Said Gregg Phillips of True the Vote, “This was an organized effort to subvert a free and fair election. This is organized crime.”

But How Do You Know the Votes Were For Biden?

In a new video, D’Souza proves for reasons why we can be nearly certain the shady votes were for Biden.

You Dare Not Speak the Movie’s Name

One reason you need to drag family and friends to see the flick is because the media is refusing to talk about the film. Even Fox News to a great extent. No wonder.

The few fact checks out there have been laughable. The general argument: “Why, it’s perfectly reasonable for people to go from drop box to drop box depositing a handful in each, taking photos of themselves doing it, in the wee hours of the morning … after stopping by organizations hell-bent on defeating the evil Orange Man. You don’t KNOW that they were trafficking votes.”

These “fact checkers” also completely ignore or dismiss the methodology, not just the technology of the geo-position tracking … even though it’s used regularly and effectively by law enforcement.

Because the evidence is so devastating and hard to argue against, the media have no choice but to ignore the film. Pretend the evidence doesn’t exist. The media are acting just like the OJ jury, except in this case it’s democracy itself that got butchered in the dead of night.

One Odd Thing in the Movie

Something in the film caught my attention. There may be no connection, but …

Just one week before 2000 Mules first streamed, DHS Secretary Mayorkas was talking about his (now-sidelined) Disinformation Governance Group. Ministry of Truth for short. One thing he specifically mentioned these censors would go after was “disinformation” being pushed on Hispanic voters in advance of the midterms. (His concern can’t be because Biden’s now polling at 27% among Hispanics, according to a new Quinnipiac Poll, can it?)

Well, there’s a whistleblower in 2000 Mules. A woman who worked for an Hispanic political organization in Arizona and confesses to helping take part in the Mule effort; both in terms of handing out checks to Mules and making drops herself at the request of her boss.

The woman, whose identity was hidden, describes how what she called the “Mexican Mafia” has long used all sorts of shenanigans to harvest Hispanic votes. How it needs to stop. How Hispanic voters in her community have to be taught this isn’t right.

Hmmm … is teaching Hispanic voters that harvesting is illegal the “disinformation” directed at Hispanic communities that Mayorkas is talking about? Certainly he has no interest in the harvesting efforts being slowed and in protecting the integrity of the vote. No more than he is interested in protecting the border.

Dare Your Liberal Friends to See It. Offer to Pay Their Way

Has your liberal cousin or pal spent every week since November 2020 yelping about Trump’s “Big Lie,” insisting “There’s no proof, there’s no proof”? This is proof. Right in front of his eyes, as he lounges comfortably in luxurious theater seating. Buy him a ticket … heck, buy him the popcorn too! Even better, offer to buy his gas.

On a pure cinematic level, 2000 Mules is gripping and entertaining. D’Souza doesn’t do boring. But you’ll also be entertained after the movie watching cousin Jake twist himself trying to explain away what he just saw with his own eyes.

Or you’ll have the satisfaction of watching Jake’s face droop as he realizes that for a year and a half he has been conned.

So please go see 2000 Mules in the theaters this weekend if you have a chance. The fine folks at Downton Abby will understand. Because if the nation as a whole doesn’t come to understand what really happened in 2020, we will be the ones entering a new era. A new era of Third World tyranny.

Mike Huckabee has done an excellent job of covering the 2000 Mules release and response (or lack thereof).