The brave men and women of the U.S. military have been at war every day since September 11, 2001. 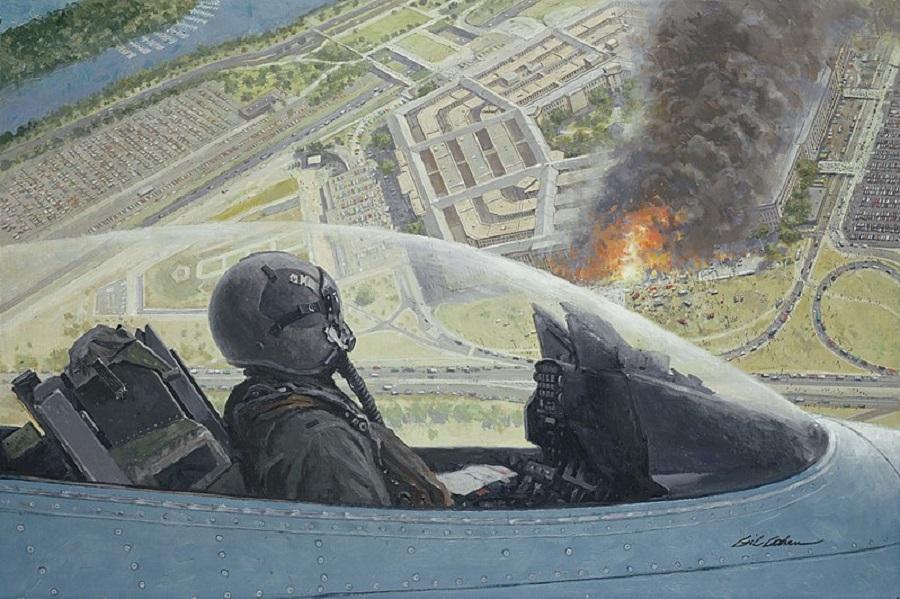 A North Dakota Air Guard F-16 conducts a combat air patrol over the burning Pentagon on September 11, 2001, after the hijacked Flight 77 crashed into it.

The 9/11 terrorist attacks caused the deaths of nearly three thousand innocent people in New York, Pennsylvania and our nation’s capital. The images and sounds of that terrible day are seared into the memory of every American old enough to remember.

Eighteen years later, the effects are still felt by survivors, families of 9/11 victims and the selfless patriots who have stepped forward to defend our freedom since.

“He loved his country, and for him it was an honor to serve,” Legna Aponte told The New York Times in 2019.

These American soldiers shared a rank and were both devoted husbands and fathers. Tragically, they were also both killed in Afghanistan – more than 17 years apart.

Sgt. 1st Class Chapman was the first U.S. service member killed by enemy fire in Afghanistan on January 4, 2002. As of this writing, Sgt. 1st Class Barreto Ortiz is the most recent casualty of America’s longest war, having made the ultimate sacrifice on September 5, 2019. A U.S. Army carry team transfers the remains of Sgt. 1st Class Elis Barreto Ortiz of Morovis, Puerto Rico, during a dignified transfer on September 7, 2019, at Dover Air Force Base in Delaware.

Sfcs. Barreto Ortiz and Chapman are two of more than 7,000 military heroes to die in Afghanistan or Iraq over the past 18 years. Unlike previous conflicts, every American to lose his or her life in these post-9/11 conflicts volunteered to serve.

How has God blessed our country with such heroes? Like the first responders who ran into the burning World Trade Center and Pentagon and the passengers who rushed the cockpit of hijacked United Flight 93, the volunteer warriors of our Armed Forces embody the best of America. Raising your right hand to serve in wartime, with full knowledge of the risks involved, is an ultimate act of selflessness and love.

Over the past decade, I’ve had the privilege of meeting many U.S. troops, veterans, and Gold Star family members. The strength they display on a daily basis is astonishing. To me, America’s real-life celebrities are people like Monica Velez, who lost one brother to combat and another to suicide – U.S. Army Cpl. Jose “Freddy” Velez and Spc. Andrew Velez – and U.S. Army Staff Sgt. Travis Mills, who lost all four limbs on the battlefield.

Meet Beau Wise. He's an Afghanistan veteran who lost both his brothers, Jeremy & Ben, in the same war. Together, Beau & I are writing @3WiseMenBook to show how blessed we are as Americans to be defended by such patriots. Please pray for the Wise family. #July4th #USA pic.twitter.com/yUeSW2PLKW

Eighteen years ago, President George W. Bush sent U.S. troops to Afghanistan as fires still burned at Ground Zero. President Barack Obama would then grapple with the war for the entirety of his eight years as commander-in-chief.

After last week’s suicide bombing in Kabul, President Donald Trump signaled an end to negotiations with the Taliban aimed at ending the war. While all Americans should pray for peace, we should also acknowledge the once-unthinkable possibility that the Afghanistan conflict could span two full decades.

Presidents and other politicians don’t bear the brunt of endless war. It’s our valiant troops, veterans and their families who sacrifice and sometimes suffer.

Before Sgt. 1st Class Barreto Ortiz recently left for Afghanistan, he and his wife discussed the possibility of his death. She shared her husband’s words with the New York Times: “Don’t be sad for me. Be proud.”

Indeed, each anniversary of 9/11 brings sadness, but also pride. We weep for the victims and their loved ones, but as Americans, we are also enormously proud that our country produces such patriots. When the annual Tribute in Light illuminates lower Manhattan, it symbolizes the victims of 9/11 and those who fell since. When I saw the two beams of light in person a few years back, I was also reminded of the fire that burns so brightly inside those who serve. Even if they are too young to remember 9/11, our country’s brave men and women in uniform help preserve the memory of each and every victim.

Tonight, let us pray for those victims and their families. Let us also ask God to comfort the loved ones of every American who laid down his or her life in the 18 years since 9/11, from Sgt. 1st Class Nathan Chapman to Sgt. 1st Class Elis Barreto Ortiz.

As you honor these heroes, try not to be sad, as a brave soldier told his wife. Be proud.