50 Questions for Christians: ‘Why is God So Violent?’ 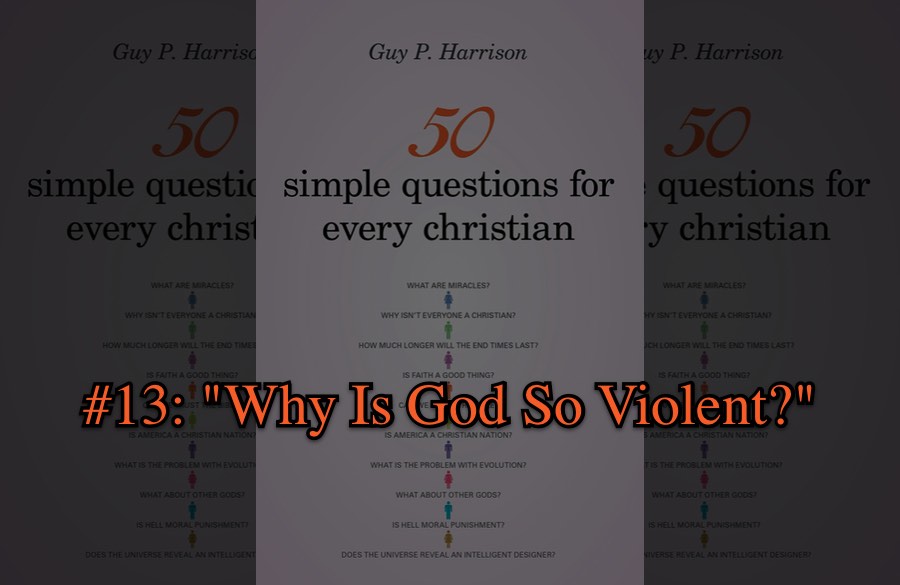 Guy Harrison wants to know how Christians square God’s “violence” with our “popular sentiment” that God is love: “If he is so violent, then why does he kill so many people?”

Sometimes the key is in how you ask the question. We need to make sure he’s asking the right one, so we don’t answer the wrong one. Harrison really wants to call on “popular” impressions about Christian theology:

Popular claims? If this “popular” God was the God Christians believed in, then Christianity really wouldn’t make sense. Harrison says he’s got a Christian background, but it’s hard to escape the impression that he’s getting his questions from internet atheists, not from any worthwhile Christian sources.

The Real Surprise Isn’t God’s Judgment But His Mercy

Harrison joins in the common human error of thinking of God more as grandfather than Father, as more indulgent and less correcting in His care for us.

The God Christians worship is a God of peace and love, yes, but also of goodness, justice, and holiness. Justice demands that sin receive its due, which is death, and the facts tell us that all have sinned. The surprise shouldn’t be that there’s such death, but that there’s such life, love, and mercy in our God. We all deserve death, but He made life possible through Christ’s death on the cross, paying sin’s penalty for all who would trust Him for it.

This chapter belies the book’s title of “50 Questions.” Harrison bullet-points 14 “violent” problems for Christians to solve, each of which could take an entire chapter to handle properly. I could recommend two books to Harrison that take much time with these problems. I can’t even attempt it all here, obviously.

God Can Act Justly In Spite of Death and Beyond It

What I can do, though, is remind Harrison that this is God we’re talking about. It bothers him that God put most of the world to death in the Flood. Somehow it’s escaped him that God superintends every human death. He has done so throughout history past, and will continue to for all time to come. Every.

Harrison has defined his problem way too small. He should be accusing God for all these deaths. But he should still remember it’s God he’s accusing. God, who knows justice perfectly. God, for whom human life isn’t limited to our few years on Earth. God, who Himself isn’t limited by time and space in executing justice.

If something appears unjust in God’s treatment of humans on Earth, it’s partly because we think “on Earth” is the whole story. If a child’s death is unjust in human terms, God has all of eternity to make it right. And why would anyone set that aside as irrelevant or “not good enough”? Do they not realize how short life here is, and how long eternity lasts?

Sin Matters More Than We Realize

And it’s also because we think lightly of the problem I’ve already mentioned: sin. We don’t think God should make such a big deal of it. We think He should be a little less holy, a little less good.

Harrison joins in the common human error of thinking of God more as grandfather than Father, as more indulgent and less correcting in His care for us. That’s the kind of mistake it’s easy to make when we think too little of the alienating, destructive, relationship-breaking effects of sin.

God Is Looking for Something More than “Sensible” People

Finally, Harrison wonders why a “loving god [sic]” wouldn’t “have made his story and claims convincing enough … so that every sensible person could be exempt from destruction on doomsday.” He wraps that question round with a disclaimer: “Skeptics ask this question not because they want to win arguments or catch Christians in a tough spot … they sincerely don’t understand how this makes sense.”

He really plays it as if this were a tough question! It isn’t. The simple answer is that God isn’t looking for “sensible” persons. He’s not seeking people who know well enough to look out for their own best interests, if that’s the kind of “sensible” Harrison has in mind. He’s not looking for the brightest people, either, in case that’s what Harrison is thinking of.

Of course it makes sense to follow Jesus, because He is the way, the truth, and the life. But “sensible” doesn’t begin to describe the kind of person God seeks.

What He Really Seeks

God is looking for something much less and much more than “sensible.” As for the “much less” part, all He asks of us is faith, the simple belief that He is real, that He has revealed Himself in Christ, that we need Him to rescue us from our faults, and that He provides that rescue through Jesus’ death and resurrection.

Is that “sensible”? Definitely. But it’s also humble. Is it advantageous? Certainly. But it’s not self-protective, the way “sensible” things often are. It’s the entry into a loving relationship, not a fire insurance transaction.

That’s where God wants us to meet Him for starters, but He wants to take us much further than that, to places where mere “sensible-ness” can’t take us. He wants to take us to a place of self-sacrificial love. Of worship. Of increasing awe and wonder at Him, and growing awareness of our humble state as His creatures.