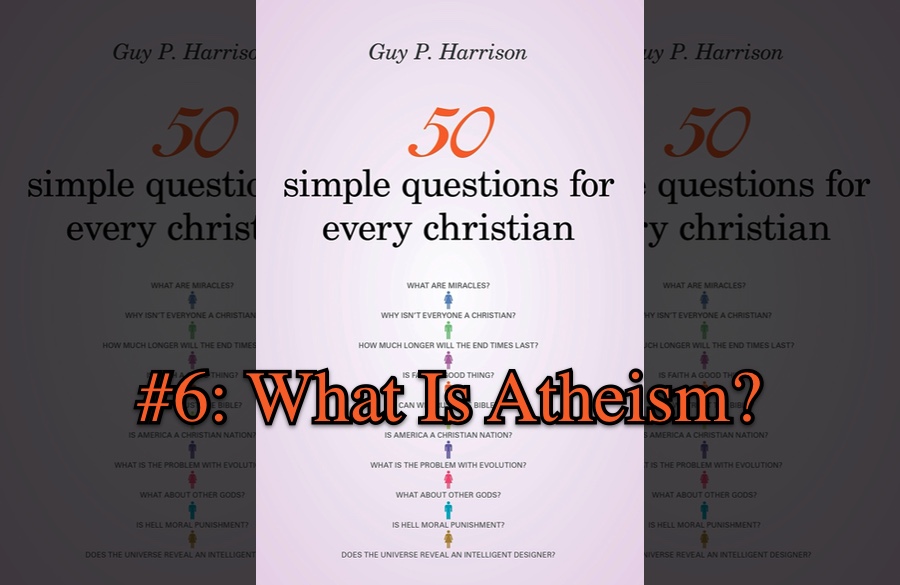 Funny thing. It almost looks like Guy Harrison, the atheist, wants Christians to tell him what atheism is. Don’t worry, it’s not a serious question. He’s not asking our opinion, he’s telling us what we think. It’s his platform for telling us how wrong we are.

Harrison says Christians (too many of us, anyway) think atheists are Satan worshipers, possessed by demons, caught in “the grip of Satan.” They’re Communists. They’re arrogant scoundrels, drug users, sex maniacs, liars, cheaters, thieves, and just selfish louts who claim atheism to “pretend” there’s no God and get a pass on all their bad behavior. They can’t disprove God, so they ought to be believers.

That’s what Christians think of atheists. Just ask him!

Not all of us think that way (he says), but enough to be worth a chapter’s worth of preaching on how wrong we are. Some of it is definitely “common” among Christians, some even “surprisingly common.” That’s his answer, anyway. He should have saved his answers for another book, since it sure doesn’t fit in a book of “questions for Christians.”

I wonder how he’d answer if we asked him, “What is a Christian?” Would that stereotype be a large part of his answer?

An Atheist Is a Human Being, Not Some Category

Since he asked, though, here’s my answer to the question in the chapter’s title. I’ll start with a different question, though. After the publication of True Reason: Confronting the Irrationality of the New Atheism, a radio interviewer led off our discussion with, “So, what’s the first thing you say to an atheist?”

Her question took me aback, until I realized the answer was altogether too obvious: “Hello.” Then if time allows, I’ll ask them to tell me their story. And I’ll listen as they speak.

You see, I don’t see much point in defining “an atheist.” When I’m with someone sitting across from me at the coffee shop, or beside me on the airplane, I want to treat him or her as a person. An individual. A fellow human being, made in the image of God, with all the human individuality and worth that comes from that.

But What Is Atheism?

Now, if Harrison had asked instead, “What is atheism?” I’d go another direction entirely. “Isms” aren’t people. They deserve respect only as far as they’re true to reality, and atheism isn’t true. Not if we take it in its classic meaning, that is, the belief that there is no God.

Contemporary atheists put a different spin on it. They’ve learned they can’t support the proposition, “There is no God.” So they’ve redefined it to mean, “the lack of any belief in a god or gods.”

In other words, they’ve shifted the burden, so they think they don’t have to prove a thing. Some of them will even go so far as to say this is the “default” position, meaning, everyone should be that kind of atheist unless and until God is “proved.”

An Extraordinarily Strange Thing to Believe

But most atheists these days are “materialists,” that is, they believe the universe is entirely material stuff. Nothing exists but matter and energy interacting by what we call natural law.

That’s not “a lack of belief.” It’s what the majority of atheists who’ve thought much about it actually, actively believe. (If they don’t hold to it absolutely, they at least think it’s more plausible than the existence of God.)

So most atheists believe the universe is self-contained. There’s no supernatural reality at all. The Big Bang set the initial conditions, and laws of nature have run the show since then. Throw in a good measure of chance on the quantum level, and you’ve got the entire explanation for everything, including everything human that’s obviously not controlled by natural laws. We’re not puppets on strings.

I’ve explained it elsewhere so I won’t repeat it here, but that’s an extraordinarily strange thing to believe, even loosely. But most atheists believe it anyway. They even call it the “default.” Weird.

Again, What Is An Atheist?

So even though I don’t know what “an atheist” is, I know what a lot of atheists believe. I don’t assume it, because everyone’s an individual human being. I would never presume to tell someone what he believes; I’d much rather ask and listen instead. Neither would I presume that an atheist is a bad person in any or all the ways Harrison listed above.

Harrison can put that on his list of what Christians believe about atheists. I’m okay with that. As long as he includes the rest of it.