The message this time is less about miracles and more about how atheists try to pull the wool over our eyes. 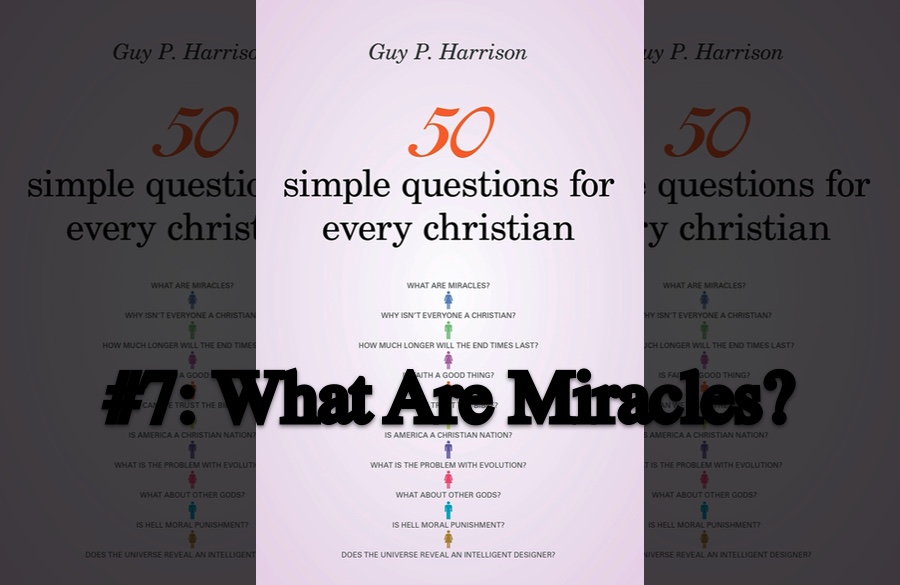 Part of an extended series of answers to Guy P. Harrison’s book 50 Simple Questions for Every Christian. Read the series intro here.\

’ve been patient, but here on his seventh question, it’s time to call Guy Harrison’s bluff. He says he has “50 simple questions” for every Christian. Some of his questions — looking ahead, that is — are interesting. Some of them, though, like this one, come loaded with pure sophistry.

Harrison’s manner of arguing here is actually well worth looking at here in spite of that, or maybe even because of it, for it’s something I see in atheists far too often. Christians need to know how to recognize and respond to it — and also how not to make the same kind of mistake themselves.

He asks, “What are miracles?” as if answers weren’t easy to find. He could have looked in Craig Keener’s massive 2000-plus page Miracles: The Credibility of the New Testament Accounts, which came out more than a year ahead of Harrison’s book. If that was too much, he could have gone to Dr. Timothy McGrew’s article on Miracles in the Stanford Encyclopedia of Philosophy.

But he wasn’t looking for a definition. He wanted to prove Christians are too ignorant to realize our “miracles” are nothing but natural events. “Ignorant” was his word for it, not mine: “I have traveled in more than twenty countries on five continents, and I have noticed the less people know about basic science and the normal workings of the world, the more often they seem to see miracles. … Religions may be the foundation of belief in miracles, but it is ignorance that often fuels it.”

Christians in scientifically ignorant (shall we say also say “benighted” or perhaps even “savage”?) parts of the globe don’t know “the normal workings of the world.” No doubt the same would apply to people who lived before science came along. Early Christians believed in the virgin birth and the resurrection because they didn’t know science said that wasn’t the “normal workings of the world.” Funny how they called them miracles anyway. You have to know what’s normal before you recognize what isn’t, don’t you?

Harrison knows just enough to try to put one over on people who know even less.

And yes, they did know where babies come from, and that dead people stay dead. Meanwhile, though, I wonder why Harrison was able to report that 76% of Americans believe in miracles, without noticing he’d just contradicted himself?

He tries to weasel out of the “ignorance” slam: “To avoid unnecessarily offending anyone, it is important to point out that ignorance only means a lack of knowledge about something.” Would that “something” include “the normal workings of the world,” I wonder?

Keener devotes hundreds of pages to detailing miracles from around the globe. He applies strict filters to his reporting, to avoid common mistakes like mistaking statistical improbabilities for natural impossibilities. Harrison makes a big deal out of errors believers make interpreting events as miracles. He’s right, to an extent: Getting a good parking space at the mall on December 23 may be an answer to prayer, but it’s not likely a miracle.

That’s fine. Just because one prayer answer isn’t a miracle doesn’t mean miracles don’t happen. I’ve experienced at least three myself. Naturally, skeptics have told me that all three were just lucky coincidences.

They’ve said the same about my friend who was healed instantaneously of severe epilepsy during prayer. “Epilepsy sometimes resolves itself.” “The timing doesn’t mean anything.” And to smash it all down on top of our heads for real, they sniff, “You just don’t get how statistics work.”

I’d love to see them sit down and have that conversation with the above-mentioned Dr. Timothy McGrew. They might want to look first at section 2.2.4. of his SEP article on miracles, though. McGrew knows statistics better than they do (unless they happen to be university-level specialists in it).

The One Question That Counts: Are Some Miracle Accounts Genuine?

Harrison wants to know about all the non-Christian miracles. I have an easy answer: It doesn’t matter. If miracles happen, they happen. Sure, if miracles genuinely happen in other religions, that might present a challenge to Christianity’s truth claims. But that’s a different question. Besides, if Jesus rose from the dead, then we’re more than justified saying that question’s been answered, too.

Harrison humbly admits, “We’re all too easy to fool.” Of course his main self-focused illustration tells how he was too smart to be fooled. If he’s really concerned about that, though, he could look at the hundreds of pages of miracle reports Keener documents in his book. He applied the strictest of filters to make sure he wasn’t being fooled. I’d like to see Harrison walk through even a few pages of that and still try to maintain that challenge.

If Harrison wants to challenge Christianity’s answers, he owes it to himself not to seek out some Christians’ ignorance (no matter how he may delight in it) but real Christian thinkers’ knowledge.

Or he could go with something simpler and read Eric Metaxas’ and Lee Strobel’s books on miracles. In all of these books, not only would he find carefully filtered miracle reports, he’d also discover that he’s not the only one asking the questions he asks about miracles. The difference is, he assumes there’s no good answer, whereas they actually give good answers.

(In fairness, Metaxas’ and Strobel’s books came out after Harrison’s. But C. S. Lewis’s didn’t.)

I called it sophistry. Here’s exactly what I mean by that. Harrison shows he knows a little bit about statistics and about the psychology by which people can fool themselves. He knows just enough to try to put one over on people who know even less. I could imagine him setting these challenges out before some college sophomore who’d never yet heard of them. I could imagine the student saying, “Wow, dude! I, like, never thought of that before.”

That’s about the level on which he’s asking about miracles here. It’s too easy. It’s sophomoric. Harrison asked, “What are miracles?” when he could have done his own homework and found out. There are some interesting questions in this book, but some, like this one, are nothing better than pretending.

If Harrison wants to challenge Christianity’s answers, he owes it to himself and the rest of us not to seek out some Christians’ ignorance (no matter how he may delight in it) but real Christian thinkers’ knowledge. That’s the principle Harrison violates most severely. That’s the mistake Christians need to keep their eyes open for.

McGrew defines a miracle as “an event that exceeds the productive power of nature, and a religiously significant miracle is a detectable miracle that has a supernatural cause. For practical purposes, we need nothing further.” Miracles do happen. I’ve seen them. Millions of others have, too. We’re not all that ignorant, despite what Harrison thinks about us.