50 Questions for Christians: ‘How Important Are the Ten Commandments?’ 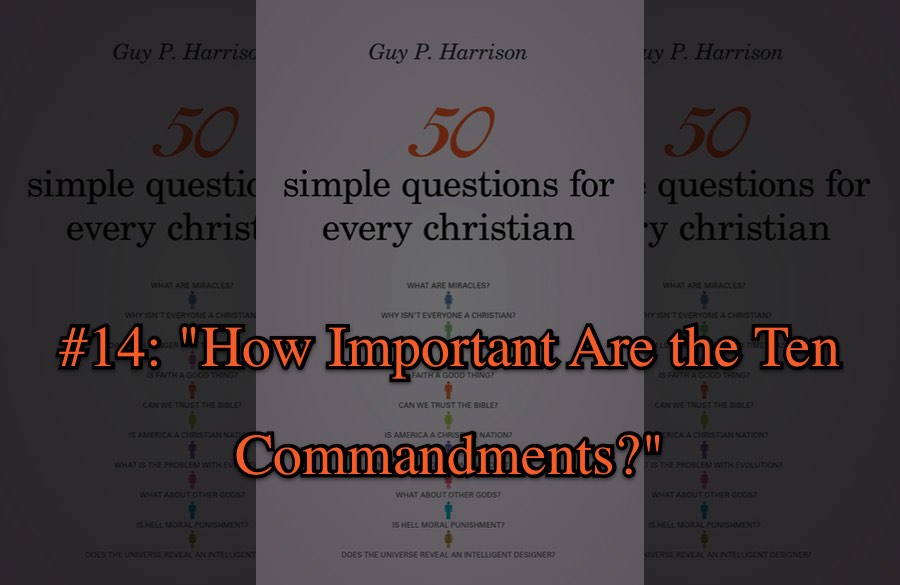 “How important are the Ten Commandments?” asks Guy Harrison. Short answer, from the Christians’ perspective: Very. They’re the only text written by the finger of God. They’ve guided the moral thinking of all Western civilization.

Well, that was easy. But Harrison keeps turning short questions into longer ones — it wouldn’t be much of a book otherwise, would it? — so our answer must go longer, too. (Sigh.) Turns out he’s really interested in another question anyway: Why do we want the Ten Commandments enshrined as law? “Christians often wonder why non-Christians don’t get it, why everyone, regardless of their religious status, wouldn’t want these laws celebrated and imposed everywhere.”

Good question — if it really were a question. I don’t know anyone who wants them imposed everywhere, at least not all of them. Rumors abound of Christians seeking theocracy. I suppose one could even find examples (there are examples for everything). But they’re rare, and they’re way out on the fringe. In fact Harrison doesn’t seem take such theocracy fears too seriously. But he still doesn’t like the Ten Commandments. None of them. Not even one.

His big problem with the first three is their supposed threat to religious liberty, as they command worship of one God only. (Maybe he’s not so theocracy-anxiety immune after all.) He can relax on that score. Christians still believe in freedom of religion and thought; in fact, it was Christians who developed that principle as practiced in the modern world.

I’ll tell you who would say it: Someone who was really motivated to find something wrong there. Someone so motivated he didn’t care how bad it made him look.

The final commandment, against coveting, is out of the law’s reach. We could no more pass a law against coveting than we could pass one against wishing you had a better house. But I repeat myself.

There’s just no theocracy wrapped in these stone tablets. Of course he’s got lots of other reasons to dislike them.

Sabbath, Parents, and “You Shall Not Murder”

Harrison doesn’t like the Sabbath law. “I think it’s wise to shut down and recharge the body. But I certainly wouldn’t want other people to comply with my view on this.” Fine. There have been blue laws in this country, but none that required people to rest, or to go to worship. Speaking of which, Christians “don’t do it on the day God seems to have originally intended.” It’s okay. Jesus specifically relaxed this command. It was the only one of the Ten for which He did that. He even explained why: “The Sabbath was made for man, not man for the Sabbath.”

Harrison doesn’t like the command to honor father and mother. Some parents don’t deserve it, he says. I would agree that not all parents deserve equal honor. The fact remains that it does a soul good to find whatever good he can find in his parents, and acknowledge that much in them. We see much more evil done in this world by those who have rejected their parents than by those who have honored them too highly.

Harrison is confused by the sixth commandment, “Thou shalt not kill.” Modern translations say, “You shall not murder;” that is, you shall not kill except under rare judicially-supervised circumstances. That covers just about all his objections, except for one that fits better under just war theory.

He’s not the least confused by the next one, though: “Thou shalt not commit adultery.” Or at least he doesn’t think he’s confused. To him it’s bad law, period, “not appropriate in any society that places a high value on freedom and privacy.” And a low value (I would add) on relational satisfaction, couples’ emotional health, marital stability, children’s emotional and relational health, and everyone’s economic well being. Not to mention spiritual health. Maybe he’s confused after all.

Our intrepid yet confused atheist friend has less problem with commandments eight and nine, against stealing and bearing false witness — except he wants it known there are exceptions, “and it’s not clear if God would allow case-by-case judgments.” I guess the rule is, only pass a law if included every possible variation of case law in it. Moses never could have carried those tablets down the mountain!

And finally, there’s the command against coveting. He defines it wrong: “to want, desire, or crave something;” he left out the part about it being something that belongs to someone else. And he’s confused (again) about whether it’s okay to offer to want your neighbor’s car, and then offer to buy it. That’s not complicated. It’s no secret: Commerce is actually encouraged in the Bible. It’s only a problem when you let desire ruin your attitude — and especially if you start thinking earthly things will satisfy what only God can.

But Harrison has one more firecracker to throw in the fire:

The worst part of this commandment is the fact that wives and servant-slaves are listed along with oxen, asses, and whatever else one’s neighbor may own. … hopefully you live in a society that is advanced enough to recognized that women should not be the property of men. This commandment shows how blatantly sexist and outdated parts of the Bible are.

Firecracker? Dud. Suppose I said, “That’s my neighbor’s wife there, sitting in his car.” Who would say, “You sexist! You’re calling her the man’s property, just like his car!”

I’ll tell you who would say it: Someone who was really motivated to find something wrong there. Someone so motivated he didn’t care how bad it made him look.

Or does Harrison have another problem? He doesn’t think the neighbor’s wife doesn’t belong on the list. Does that mean he thinks it’s okay to covet her after all?

“These are only some of the problems with the Ten Commandments,” he says, “that skeptics think of when the topic comes up.” If they thought about it another moment or two, they might realize they weren’t problems after all.

He says his purpose here is to help believers “better understand” why many people have issues with the Ten Commandments. Understanding is good. Don’t you wish he’d try a little harder to return the favor?