How do Christians know our God is the best one to follow, when we haven't checked out all the millions of other gods? 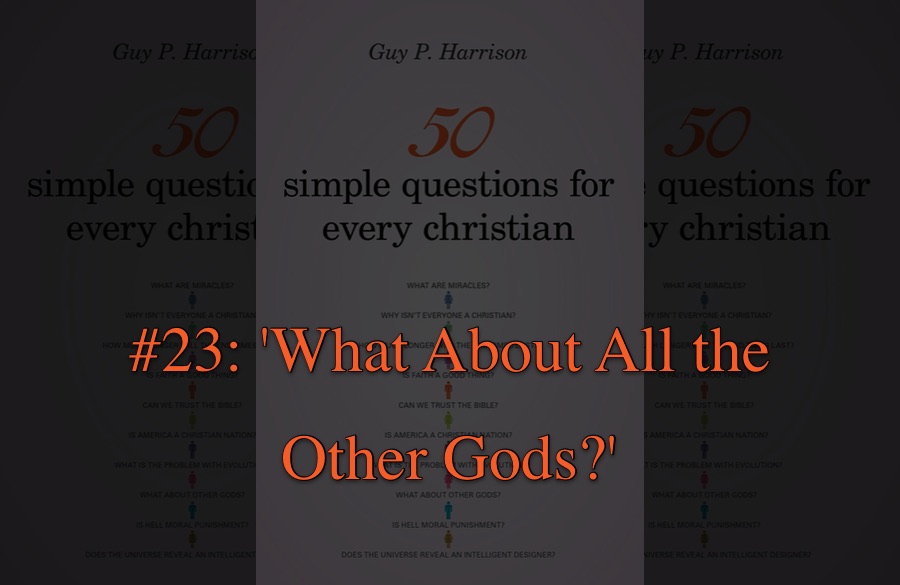 So here’s the problem with Christians, at least according to Guy P. Harrison. This one’s big: millions or who-knows-how-many big! Our problem is that we’ve decided to believe in one God when we haven’t investigated all the other gods. It’s both a moral and an ethical problem. How ignorant of us! How arrogant!

And there are many to investigate. There are the gods of the animists, inhabiting the wind and the trees and the rocks and the seas. There are the hundreds of millions of Hindu gods. There’s Ramses, Alexander the Great, and Julius Caesar — they were gods, too, you know! And Christians pick just one.

Worse yet, we’re “polytheists” ourselves: “Most Christians think and speak of multiple gods,” he writes. “Jesus did not flood the world, in the minds of most Christians. God the Father did not suffer on the cross.”

Funny thing about it: He dismisses Christian thinking as “intellectually indefensible,” “arrogance” and “ethnocentric.” “Believing inside a protective bubble may feel good,” he says, “but it’s not worthy of anyone who values integrity and reason.” Few Christians have ever “paused and [given] the matter some thought.”

That’s how he views Christians, yet he also faults us for thinking other religions’ followers are “insane or stupid,” “idiots” or “morons.” It’s wrong if we do think that way about some people, but it’s not wrong if he does it. Convenient, no? Yet he himself calls it “convenient” that we pass by the question of whether other gods might in fact exist.

So let’s take this one step at a time. First, the polytheism charge. Do Christians believe in three Gods? No. We believe in one God in three Persons. While some believers think or speak carelessly about the relation of the three Persons, Christianity itself has this thoroughly worked out. The Church spent centuries doing so, using the best tools of theology and Greek philosophy. This is such basic history, it’s intellectually irresponsible to write a book about Christianity without taking it into account.

Second, how do we know other gods don’t exist? That depends on what the word refers to. If a god is any powerful preternatural being, then other gods do exist: angels and demons. But that’s hardly the question Harrison has in mind. (If it is, it’s a trivial one, which wouldn’t surprise me).

If He speaks truly, that’s our answer, and our God does not lie.

Here’s the question that matters: Are Christians correct to believe there is no other “god” that can compete for our allegiance with the God we follow? And is it safe for us to believe it without first investigating the other possible gods?

Only One Sacrifice for Sins

Christians believe Jesus died on the Cross for our sins. If that’s true, and if His sacrifice provides the way to God, then necessarily it provides the only way to God. If there’s another option, that makes the Cross itself optional. If the Cross is optional, then Jesus didn’t have to suffer the brutal humiliation and torture of His trial and death for us.

But if He didn’t have to, why did He? Why would He suffer so? Why would God the Father watch in approval? Why would the Holy Spirit have led Him to the Cross? None of it would have happened — unless it had to happen.

The Cross is good because it’s the means by which God reconciled us to Him in love. Jesus endured it for the joy set before Him (Hebrews 12:1,2), meaning, our restored relationship with God. So it was good — very, very good.

Besides that, Jesus Himself is strong evidence that there is but one God. In Too Good to be False I go into great depth exploring His magnificent uniqueness. I’ll summarize quickly here:

Finally, if our God is God, then He is the only God. He Himself tells us, “I am God, and there is no other.” If He speaks truly, that’s our answer, and our God does not lie.

Not satisfied with that? There are significant philosophical reasons, too, to be sure there’s only one God. Here’s one of them, stated informally.

If there were another self-existent, eternal, uncreated being equal to the God of Christianity, that other being would have to exist in some kind of relation to the God we follow. The two would have to inhabit some kind of multiple-god-space created by neither of them. That god-space would in turn require another being greater than either of them (in some senses, at least) to create and/or to manage it. Neither of the two could be ultimate in any sense of the word; neither could be God in the way Christians conceive of God.

If that seemed confusing, be of good cheer: It’s actually just confusion, incoherence, and logically impossible. If our God is ultimate, then He is the only Ultimate. He cannot share that status with anything or anyone.

How do we know all this is true? That’s a fair question, but it’s not the one we’re dealing with today. The point for now is, if it’s true, it’s sufficient: Our God is the one God, and we know it safely and securely without having to eliminate even one other “God,” much less millions of gods.

And it all seems so obvious, doesn’t it? I still think it’s strange that Harrison showed no evidence of even thinking about it this way. It’s even stranger — or “convenient,” maybe — that He would think we were mindless, “intellectually irresponsible” idiots for it.