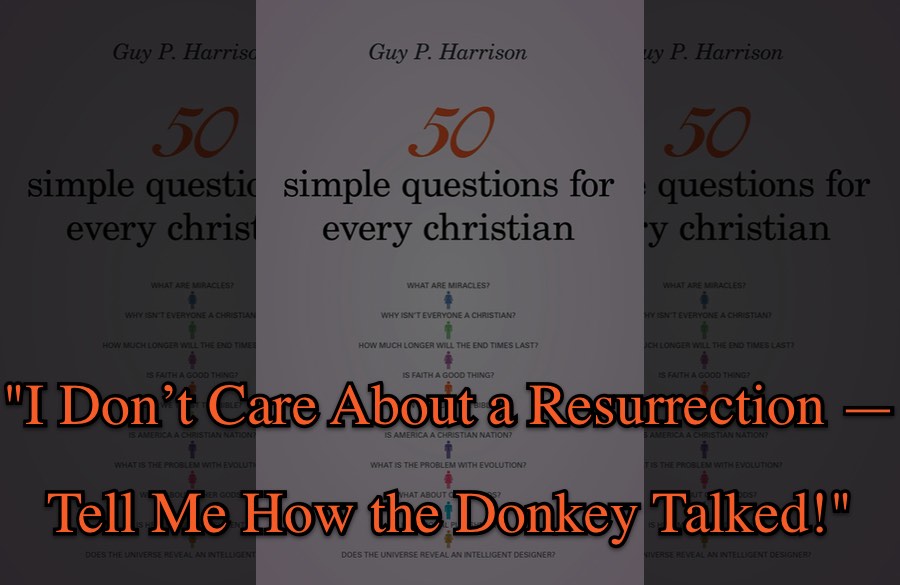 This title is not from Harrison’s book, as it has been for most of this series. It’s a quote from quite a different atheist, from a rather ridiculous encounter Harrison’s book brought to mind. It showed how some unbelievers’ minds can drift toward the absurdly trivial. I’ll tell the story, then explain how it connects with Harrison.

It happened at the grand worldwide atheist “Reason Rally” on the Mall in Washington, D.C. in 2012. They’d billed it as the “largest secular gathering in history,” with celebrity headliners coming from Hollywood, from England, and places in between.

Some Ratio Christi friends and I showed up to hand out bottles of water and a chapter from the just-released book True Reason, and to have conversation. The atmosphere was, in a word, dehumanizing to Christians.

“Tell Me How the Donkey Talked!”

One man demanded I tell him “how the donkey talked” — meaning Balaam’s donkey from Numbers 22.

I answered, “I’m sorry, but I don’t know how the donkey talked. In fact, I don’t really see that it matters how it talked.”

“You don’t know how the donkey talked?”

“No, of course not. For all I know or care, God could have installed a boom box in his throat. It really doesn’t make any difference how He did it.”

“You mean you clam to be Christian and believe all this,” he sneered, “and you don’t even know how God did it?”

Well, this was obviously going nowhere, so I decided to take a potentially more productive tack.

“Look,” I said, “if you want to talk about something hard God did, forget about the donkey. Let’s talk about a Man rising from the dead.”

I’ll never forget his answer: “I don’t care about any resurrection, I want to talk about the donkey.”

I was dumbfounded. I had to catch my breath. Then I ended it: “Well, I guess you’ll need to to find someone else to ask, someone who’s as interested in donkeys as you are.”

Guy Harrison’s book doesn’t run to the same open absurdity, but it does get trivial. When I committed to answering his 50 questions in a weekly series here, I wasn’t committing to writing boring articles. His topics are never totally meaningless, but in a question-and-answer between atheism and Christianity, I don’t see the point of spending much time on some of them.

Some of these are too easy, some hardly relevant, some just versions of “I don’t believe the Bible. Do you?” Because (for example) if we can believe the Bible, then angels are real. None of us has what it take to take Jesus’ place on the cross, which is why He died for us in the first place.

He asks, “Does Jesus heal the sick?” That’s either a repeat of his question, “What are miracles,” or another version of, “Do you believe what the Bible says?”

All these questions matter greatly in some contexts. I do not mean to downplay that one bit. But here it feels more like an atheist poking a stick at us.

Harrison’s first sentence in the Introduction was, “This book is not an attack on Christian people.” Maybe not. It’s more like an extended, subtle snipe at Christian belief instead. Harrison is polite, but it doesn’t always feel real. He’s trying hard not to disclose the fact that he’s looking down upon us benighted believers.

What’s the Big Deal? Does He Really Think This is Hard?

Now, in a sense that’s understandable, even unavoidable to a certain degree. I’m writing about Harrison, and I’m saying I think he’s wrong. Where his approach bothers me most is where he dwells on either trivial questions or too-easy ones. Why does he ask? Does he really think they’re a big deal? Or that they pose some kind of problem to the faith?

Sometimes I want to answer him, “I don’t know. God could have installed a boom box for all I care.” Because so much of it is a distraction from the real thing. If Jesus rose from the grave, then the rest? It’s easy. I’m not interested in talking about donkeys.

This series will return in two weeks to address many of Harrison’s remaining questions which are not so trivial. I’m planning to put my focus elsewhere during Holy Week, though, so I won’t be writing on this next Saturday.