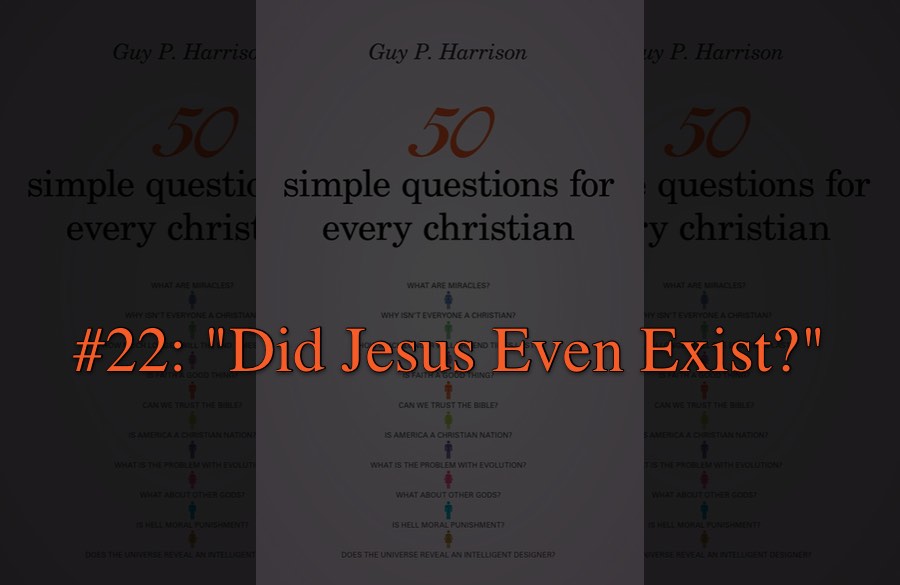 Part of an extended series of answers to Guy P. Harrison’s book 50 Simple Questions for Every Christian. Read the series intro here. I’ve been looking forward to this one!

Guy P. Harrison wants to know if we can be sure Jesus ever actually existed. Maybe so — lots of scholars think so, as Harrison notes. Or maybe they’re wrong. Maybe “some Jewish people just made it all up.” It’s a story, he reminds us, and he’s “skeptical of stories about Jesus serving as the proof that a man named Jesus existed.”

So I have a couple questions for Mr. Harrison. This will be a different take on Jesus’ historicity than any he’s ever seen before, I promise. It’s not the first good approach to “Jesus myth” theories to come along; far from it. But it’s one the skeptics haven’t answered yet, because they haven’t even seen it yet; the book on it is coming out just today. Many serious students of the New Testament have assured me that this approach is new. And by the way, that means it’s going to be new for you, too, the reader.

So here’s my question. What if we take this “story” thing seriously?

This will be new to the skeptics (and most of the rest of us) so let’s take it slow and easy for starters. Let’s begin with three obvious facts, on which no one could possibly disagree. It won’t remain obvious for long, but we do need to start there.

The Easy Part: Jesus’ Story Is a Story

First, skeptics and Christians alike agree that there’s a story of Jesus. It comes to us in four interdependent versions, the four Gospels. Skeptics think the story is legendary, believers see it as true. Either way, we’re safe in calling it a story.

Second, everyone agrees that the story has a main character, Jesus.

Third, everyone agrees that stories come from somewhere. Every story has a backstory, in other words, that explains how it came to be.

That was the easy part. (Really easy.) Now, though, it gets interesting: What’s the backstory that explains the Gospels?

Two Backstories to “Explain” the Story

Harrison proposes a backstory based on the hypothesis that Jesus never existed. He says maybe, “some Jewish people just made it all up.” That’s a really uncommon view, though even among skeptics. Harrison doesn’t really believe it himself.

Most skeptical scholars think there actually was a man named Jesus. He was a pretty impressive person and all, they say. He taught, He gathered followers, and He made quite a stir around Galilee and Judea — until He went and got Himself killed. His followers were devastated. They’d thought He was going to be their Messiah, their King! Somehow, though, (it’s called cognitive dissonance reduction, but we can skip the details here), they decided He could still be their King after all: All they needed was to invent a resurrection for Him! So they did that, and they padded His story with miracles, too, to support his supernatural kingliness.

And then they started telling others about Him, who told others, who told still more. The story spread by word of mouth, all across the Mediterranean region. It spread so far, it even turned into a huge multicultural Telephone Game. That’s the game where one child whispers something into the next child’s ear, who whispers it to the next, and it goes around the circle until it comes back to the first child, and everyone laughs at how it changed.

It’s by this kind of process — I call it the “Story Scrambler” — that skeptics think the real, very human Jesus morphed into the God-man Christians believe in.

Skeptics love to point out minor inconsistencies between the Gospels as evidence showing how facts got messed up during the legend’s travel and growth. Different Gospels tell about different numbers of angels at the tomb that first Easter morning, for example.

Even more than that, though, the skeptics rely on their assumption that where there are miracles, there must be legend, never fact, because (as “everyone knows”) miracles don’t happen.

Now, so far I haven’t said a thing most skeptics would disagree with. I’ve been busy setting up for my next question instead. Stories always come from somewhere, and skeptics think the Telephone Game and oral tradition can account for the imperfections (like miracles) and inconsistencies.

There’s one thing the skeptics’ explanation can’t account for, though — and it’s not what you’d call a small factor in the story. It’s the character of Jesus. Does their backstory really explain Jesus the way the Gospels present Him?

There’s one thing the skeptics’ explanation can’t account for, though — and it’s not what you’d call a small factor in the story. It’s the character of Jesus.

Jesus’ character in the story is manifestly not scrambled. Across all four Gospels, He is the single most superb example of self-sacrificial love the world has ever seen — the One whom Bonhoeffer called “the Man for others.” Who else do you know of with His kind of power who only (only!) used it for others. What genius novelist has ever invented such a selfless, giving character as Jesus?

Their Backstory Doesn’t Explain the Way He Preached

That’s one unlikely “legendary” aspect of Jesus’ character. There’s more. Across all four Gospels He speaks with authority in ways that no Jewish rabbi, priest, or even prophet would ever speak. The prophets said, “Thus says the Lord;” Jesus never did. Instead he said, “But I say unto you.”

Both He and the prophets spoke as if with the authority of God, but the prophets always made it clear they were speaking on someone else’s (God’s) behalf. Jesus spoke on His own behalf — yet with the same divine authority. To call that unexpected in a Jewish story is like saying it would be unexpected for Donald Trump to suddenly go work as Nancy Pelosi’s apprentice. It’s an understatement too huge for words — and yet all four accounts are absolutely consistent in it.

Jesus’ character cries in contradiction of the skeptics’ Story Scrambler theories. I could add even more, though. He’s perfectly wise. He lives in perfect communion with the Father. His leadership is nothing short of spectacular.

Here’s the sum of it: Jesus’ story, as depicted in the Gospels, is the only story of a perfect human character that’s ever been told. That’s what you find when you take it seriously as a story. And something that extraordinary needs an explanation. Where did this character Jesus come from?

He’s Too Good to be False

Story scramblers do not produce perfect characters — especially not in four consistent versions. The skeptics’ “explanation” for Jesus simply doesn’t explain Him. The only possible conclusion is that Jesus didn’t come from a scrambler after all.

The legend theory makes no sense, so where else could the story have come from? The skeptics have no other ideas on offer, but believers do: The Gospels tell the reliable, faithful, and true account of the one perfect Man who’s ever walked the earth.

Or as I have put it in my own new book detailing all this (on a level written for lay persons), Jesus is Too Good to be False.

The book releases today. And now you know why I said in the opening line, “I’ve been looking forward to this one!” Check out the endorsements and early reviews, please. If you’ve ever had reason to doubt Jesus’ full reality, I promise you this will help, like no book you’ve read before.

Tom Gilson (@TomGilsonAuthor) is a senior editor with The Stream and the author or editor of six books, including the new Too Good To Be False: How Jesus’ Incomparable Character Reveals His Reality.