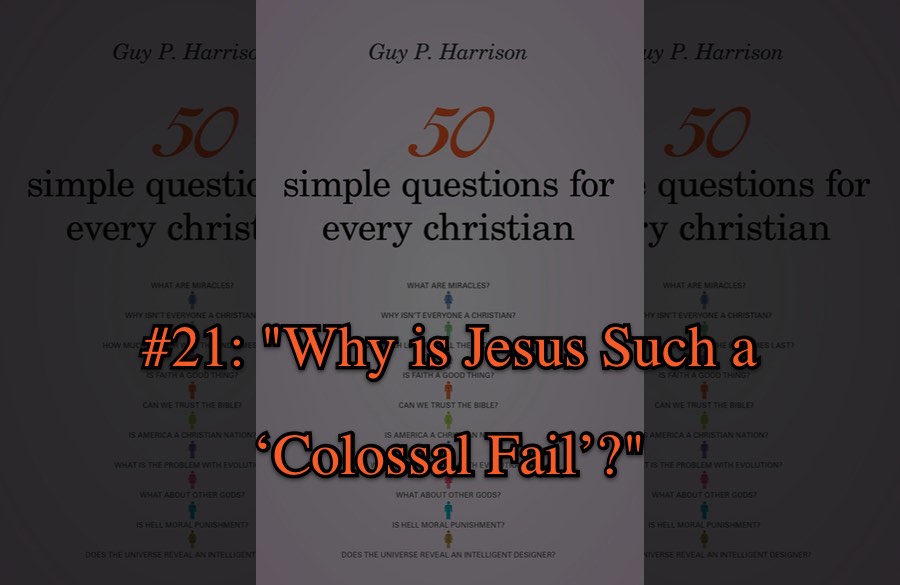 Jesus came to earth to save us, but a whole lot of us aren’t saved. That makes Him a “colossal fail,” right? So says Guy Harrison.

But no. Sorry, but he’s wrong. Really wrong, and very dangerously wrong, for his sake. He’s missing the real Jesus in real ways.

If Jesus Had “Succeeded” That Way, He’d Have Failed

Let’s start with his first and most obvious error. Jesus said the right path is the narrow one with the narrow gate, and that few would choose it. If everyone had followed Jesus, that wouldn’t have proved Him right, it would have proved Him wrong!

Realistically, too, Jesus came to a nation with a long history of people rejecting the truth. He wasn’t blind to that. He even pronounced judgment on some of the cities that hadn’t welcomed His works!

Harrison thinks he’s scoring points by refuting something no one believes in. Why bother? Isn’t it boring?

And Israel was situated among other nations who were even less inclined to believe in Him. Nothing in the Bible comes close to suggesting that Jesus or anyone else expected a complete, 100 percent turnaround in any of those nations.

The Christianity that Harrison thinks should succeed by converting everyone is one that no Christian ever envisioned. He thinks he’s scoring points by refuting something no one believes in. Why bother? Isn’t it boring?

So Why Is the Story Still So Easy to Doubt — Or to Believe?

And yet in this chapter there is one real gem:

If the Christian god [sic] loves us and wants us to know him, then why make the story so easy to doubt? After all this time, two thousand years later, the story still can’t convince half the people on earth.

True. And two thousand years later, the story still can convince a lot of people — and can do it on the strength of its evidence. I’m one of them: I came to Christ by studying evidences for faith, and I’m still a Christian because the evidence keeps accumulating. There’s been a huge upsurge in positive evidential information over the past several decades. Meanwhile atheists keep bringing forth counter-arguments.

So here we are, 2,000 years later, and people can still believe or disbelieve. There’s no smoking-gun proof either way; nothing to force anyone to choose one way or the other.

I find that striking, don’t you? And what if I told you that it has been that way for 2,000 years now? That it has always been possible, based on the evidence, either to believe or disbelieve? That when skeptics come up with new arguments, Christians do too, and vice versa?

Things have been that way for a very long time now — so long, that it looks suspiciously fine-tuned to me. That seems unlikely just to have happened. It carries the appearance, instead, of design. Of leaving us human freedom, as a loving God would do. The very fact Harrison which considers a problem — that belief and disbelief are both plausible — may actually count as evidence in favor of belief!

Honestly, though, even though I hold evidence in high regard, I don’t see it as all-important as Harrison does. It’s practically a god to him. He thinks that if everyone had enough evidence, everyone would believe. That, however, is certainly not the report I hear from atheists, whose disbelief is often far from rational.

Some say they would, sure, and Harrison is one of them. Others, though, say they don’t want there to be a God. That would include prominent thinkers such as Thomas Nagel, Will Provine, and Julian Huxley.

Some set the bar so high they’re just being ridiculous. Manual for Creating Atheists author Peter Boghossian imagines all the stars rearranging themselves to spell out every person’s name and then, “I am God! Believe in me.” That would be “suggestive,” he says, but not strong enough: He might also suffering a delusion.

It seems unlikely just to have happened that way. It carries the appearance of design instead.

Others choose to believe rank nonsense. Duke University philosopher Alex Rosenberg wrote The Atheist’s Guide to Reality, in which he argues at length that there is no such thing as thinking. You cannot think, especially if you (ahem) think you’re thinking about something — because atheism entails that it’s impossible to think about anything.

He’s right on that, by the way. Atheism (specifically materialist atheism, which he embraces) really does lead to that conclusion. I’d call that a great reason to reject it, but Rosenberg somehow doesn’t.

Colossal Fail? Hardly! Jesus Knew It Would Be This Way.

These are just a few of many cases where people have chosen atheism for reasons that have nothing to do with evidence.

Why then do so many people reject Christ? Harrison has a simplistic, one-dimensional answer: not enough evidence. Reality says people make choices for a lot of reasons, and they aren’t always intellectual.

Jesus Christ knew that, too. None of this would surprise Him, and none of it undercuts belief in Him. He told us it would be this way.