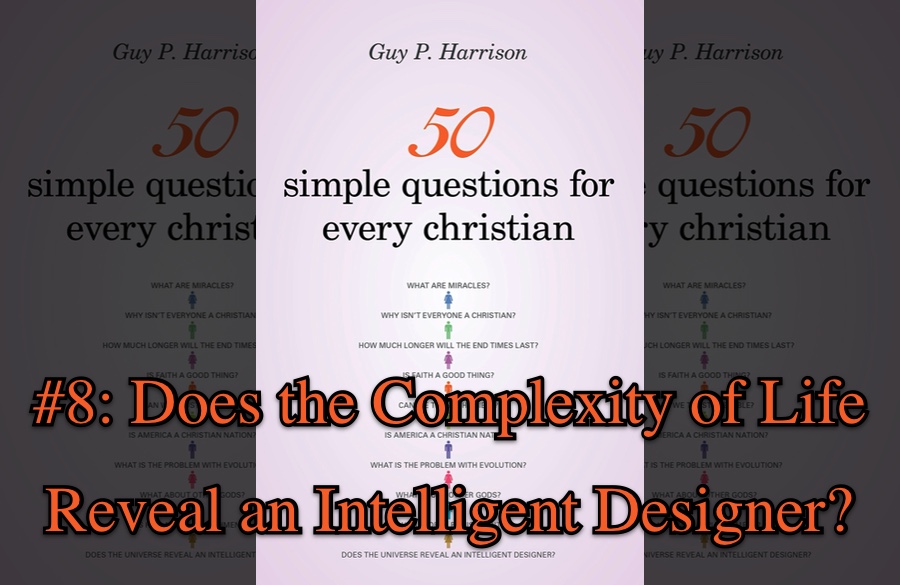 Does life’s complexity reveal an intelligent designer? Yes. (That was easy.) Next question?

I wouldn’t ask the question quite the way Harrison did, though, and neither would most theorists working in the field of intelligent design. Not because it’s a wrong question, but because for too many ID opponents, it’s the only question — as if it covers just about everything ID has to say.

Intelligent design has been the target of attack, scorn, and distortion for decades. Its detractors get its explanations wrong, and they even get its questions wrong. In fact, it’s safe to say that whatever you’ve heard or read about ID is wrong, unless you’ve heard it from those who actually study it.

Antagonists don’t want ID to look good, so why would they represent it accurately? You’d be amazed how often ID proponents say, “I thought that reporter was listening during the interview, but they ended up writing what they wanted to write instead of what I said.”

Let’s allow Harrison’s chapter to illustrate. I’ll have to be selective; there’s too much there to cover all the ways he distorts ID. I’ve provided a reading list at the end for those who care to know what ID really has to say.

“Life is So Complex, It Couldn’t Have Just Happened”

That statement is Harrison’s opening picture of intelligent design. It’s not entirely wrong, it’s just naive, and there’s a better way to word it even at that simple level.

Life exhibits design. Anyone can see that cells, organs, systems, and even ecosystems all have clear purposes in the scheme of life. Richard Dawkins, who is as strong an opponent as ID could possibly have, admits biology is the study of organisms that have the appearance of design. It’s a natural conclusion, which people like Dawkins have to work very, very hard to explain away.

But it would be wrong to think of ID as working only at that simple, folk-level analysis. It isn’t just, “Oh, my, it all looks so terribly complex.” (Again, see the reading list.)

“Life’s Variety Is So Overwhelming, It Must Be From God”

For both the scientist and the layperson, thinking about the amount of life and how … diverse it all is can seem incomprehensible and overwhelming. It is certainly understandable why many people would want to throw their hands up in the air and conclude it can only be the work of a god.

Or in other words, ID proponents are weak-minded, easily overwhelmed, and prone to giving up. Such a beautiful rhetorical trick, if trickery is what you’re into. Make them look stupid; then you don’t have to worry about what they have to say.

ID antagonists get it wrong all the time. No wonder: They’ve got a vested interest in making it look bad.

It’s a fallacy called ad hominem, in which one tries to undermine their opponents’ case by making them look like bad persons. It’s fallacious even when they actually are bad persons. It’s even more irrational when you’ve misrepresented them to look that way. Again, read the books; you’ll discover the reality that’ll tell you the difference.

“It’s All About Ignorance”

Harrison writes, “They point to a big, fat blank in our scientific knowledge about how it all started and fill in ‘God.’” Wrong. Intelligent Design doesn’t bank on ignorance, it thrives on knowledge.

We know so much more now than Darwin ever dreamed. I want to give you just a taste of it here. I knowing this will raise more questions than it answers, since I can’t detail any of it enough to do it justice. It would take that reading list for you to get a full appreciation of it all. Still, a taste is better than nothing.

I could easily see some readers going through the next several paragraphs and saying, “That’s too much. It’s overwhelming!” I’m doing that on purpose. Harrison thinks ID people can’t stand being overwhelmed by the mysteries of life. This should show there’s no fear of that on our side.

We know that Life is built on complex specified information, DNA. Along with that, we know from universal human experience that this kind of information never arises except by the action of mind, of intelligence capable of producing it.

We know that cells aren’t mere blobs of protoplasm, as Darwin thought. Every living cell is jammed with nanomachinery whose coordinated interworkings rival that of a large city.

We know from very recent research that where evolution actually is observed — most famously in bacterial antibiotic resistance — it always happens by breaking genes, not by making them. It doesn’t build upward, it breaks downward. This is no recipe for evolving from bacteria to orchids and sequoia trees, or to elephants and octopuses and humans.

We know that many functions and structures, from inside the cell to across entire systems, are “irreducibly complex.” Irreducible complexity isn’t just a matter of “current ignorance” about how things work, as Harrison puts it. It’s the result of advances in knowledge, first of all. And it’s not a case of “We can’t figure out how this evolved.” It’s, “This is the kind of structure that evolution could not possibly have produced, not even in principle.”

We know that the fossil record displays essentially the same record of large differences between species that it was showing in Darwin’s day — especially at the point of the “Cambrian Explosion” some 600 million years ago. Darwin confidently predicted that future fossil finds would support his theory of gradualism. Darwin was wrong.

We know that despite decades of intense work, scientists have absolutely no viable theories for how evolution could have been kicked off in the first place. That is, there’s no viable natural explanation for the origin of the first life. Not only that, but natural theories keep proving to be impossible in principle.

That’s just a taste of it. ID antagonists get it wrong all the time. It’s no wonder: They’ve got a vested interest in making it look bad. If you think you can dismiss it easily, it’s probably because you’re dismissing a distorted version, not the real thing. That’s exactly what Harrison did in this chapter.

Plenty of Good Reading For You

Harrison says he wants to know whether the complexity of life reveals an intelligent designer. I wonder: Does he really want to know? Then here’s where he could start. First, a website to explore, from the Discovery Institute’s Center for Science and Culture, the heart of intelligent design research.

Then the book list. Not only do these books get the questions right, they also explain ID’s real answers. Again, if this looks overwhelming, that’s intentional; it’s part of my message to Harrison. Honestly, the list could go on much longer than this.