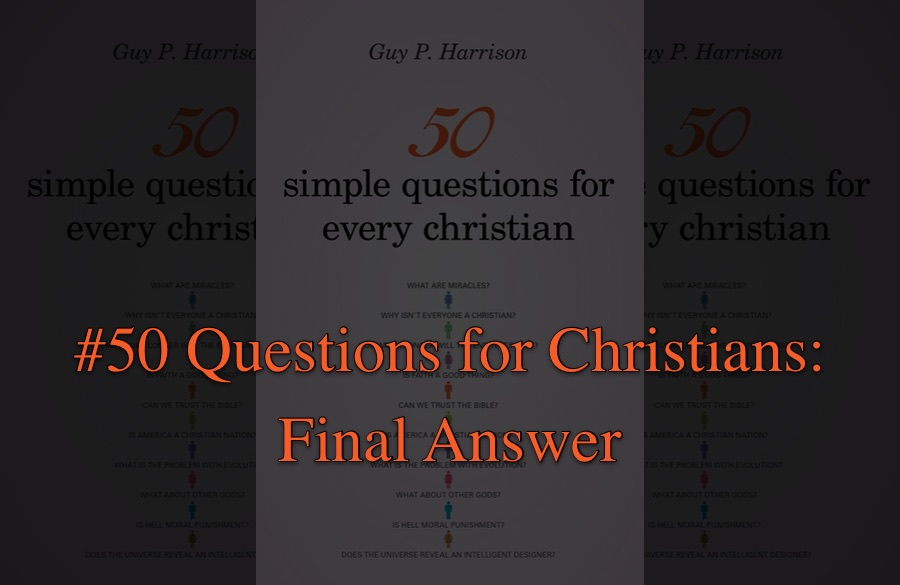 Last in an extended series of answers to Guy P. Harrison’s book 50 Simple Questions for Every Christian. Read the series intro here.

This is answer number 31 to Guy P. Harrison’s 50, but it’s enough now. I’m closing this series today with a question Guy P. Harrison should have asked, but didn’t: How did such a self-identified student of religion come up with such a shallow, surface, grade-school understanding of Christianity?

Don’t jump to blaming him alone. Christians, we need to take responsibility and learn from it, too.

His shallow view shows up all over his first chapter, “Does Christianity Make Sense?” which I skipped over at first. He can’t figure out how God could send God to earth and die as a sacrifice to God. We have an answer for that. It’s basic teaching — not the kind of teaching you’d introduce to little children, but any eighth or ninth grader should be able to handle it. Harrison acts as if he has never heard it before. The same goes for his questions on why Jesus had to die for our sins, why God had to save us “from Himself,” and why it’s enough to embrace Jesus as our Lord and Savior.

Harrison also says there’s not enough evidence. Part of his problem is that he’s looking for supernatural claims to be “validated by the scientific process.” Science is the study of nature, so I can’t understand why he’d think that’s where he has to look for proof of the supernatural. Part of Harrison’s problem with evidence, though, must the same problem I’d have if I thought his version of Christianity was the real thing. His version is foolish. If I thought it were real, there couldn’t be enough evidence in the world to make me think it was true.

Part of Harrison’s problem is that he doesn’t realize how much of a problem he has. In the intro he says he’s not putting forth a “clichéd and cartoonish angry atheist attack.” I’ll agree it’s not angry, but it sure is clichéd, sometimes even cartoonish. I’ve seen it time and again in doing this series. And he doesn’t even seem to realize it.

Why Can’t God Just Forgive? (Not Such a Hard Question, Actually)

Let’s get down to specifics. I can’t do this with every question in that first chapter; there are almost 50 of them in there. But I can illustrate with one:

If God wants to save us from hell, why not simply stop sending people to hell? If he wants to forgive us for being imperfect, then why not just forgive us? I have forgiven people many times in my life without requiring an oath of loyalty and love from them. I just forgave them because it seemed the right thing to do.

Is that supposed to be a tough challenge? My goodness, I think a second-grader could make sense of the answer. Harrison, “clear thinker” that he claims to be, should have had no trouble figuring it out himself.

Let’s suppose Harrison is a single guy with a female co-worker, Maddie, who’s really attractive, but for no good reason starts bad-mouthing him behind his back. He finds out about it the first day, and of course it bothers him, but since “it seems like the right thing to do,” he forgives her, just like that. He sees her in the hallway, walks up to her and says, “Maddie, I heard what you did, but I want you to know I forgive you.” She looks at him a little puzzled, says, “Well, okay, sure,” and walks away.

Already this is an impossible scenario. The real Harrison would quickly realize forgiveness no longer seems “the right thing to do;” in fact, it’s wrong and foolish. I could stop here, but as long as I’m at it, I’ll carry it on to the next level of “forgiveness.”

Why Can’t God Just Bring Us All to Heaven, Too?

One day it all changes. Maddie comes to Harrison with her sweetest smile on, saying, “Well, hello, Guy! I just found out you come from a rich family. You’ve got a huge home with a swimming pool and tennis courts and massive kitchen and a home theater. So I was wondering, could I move in with you?”

“Are you serious?” he retorts. “After all you’ve done? You want my house and my stuff now?” She comes back ever so sweetly, “What? How could you even hold any of that against me? I thought ‘forgive’ meant ‘forgive and forget.’ It’s all behind us now, isn’t it? Why should any of it even matter?” But of course it matters; any fool would know it matters. She’s going from abusing him one way to using him another.

None of that was hard, was it? Harrison’s “clear thinking” is shallow thinking.

I don’t know what the real Harrison would think next, so don’t let this reflect on him; it’s just imagination, okay? Let’s suppose his next thought was, “Well, there would certainly be advantages. She’s hot. I wish there were some way I could say yes, but I just can’t do it when she’s the kind of person she is.”

So he goes out for Chinese that night, opens the fortune cookie, and finds it saying, “Your wish is granted. Just say the word, and Maddie will change. She’ll start treating you the way you’d love her to treat you, and she can move in, too. No charge, no cost to you, just say it and it’s done.”

And if someone said, “Look, Mr. God, isn’t it clear enough by now? I don’t like you! I don’t want to be here with you!” the god could say, “Oh, that’s easy, I can fix that.” He snaps his fingers, you blink your eyes, and suddenly you love him. And in the background the god would be thinking, “Whoa, that was easy. I get all these cool people loving me forever in heaven, and at absolutely no cost to myself!”

Christianity is ready and able to meet its intellectual challenges — but how many Christians are?

Maddie doesn’t want Harrison, just the pool and the kitchen and tennis courts. He gets some power, abuses it, and suddenly Maddie is madly in love with Guy, too. She gets it all, including the part she didn’t want. And is it really Maddie at that point?

The parallel to God and heaven should be clear enough. It’s not forgiveness, it’s mind control and abuse. And none of that was hard, was it? Harrison’s “clear thinking” is shallow thinking.

Want to up your readiness? Start here!

Greg Koukl, The Story of Reality, which explains exactly how Christianity makes the most sense of reality, from beginning to end.

J. Warner Wallace, Cold-Case Christianity: A Homicide Detective Investigates the Claims of the Gospels, a highly engaging, readable overview of reasons for confidence in Christianity.

Tom Gilson, Too Good to be False: How Jesus’ Incomparable Character Reveals His Reality, focused entirely on answering Christianity’s central question for Christianity: Why Jesus?

Shouldn’t the courage to accept reality as it is and not as we would prefer it to be [sic] an admirable quality? Why aren’t skeptics the first to find god? Wouldn’t those who make an honest effort to sort out sense from nonsense be the first to discover a real god if here there?

Translation: “God should be for smart people. Skeptical people. People like me.” It goes along with Harrison’s belief that God should forgive people the same way  he does. He sets himself as the standard God should live up to.

This is exactly the pride that every student of the faith knows is at the root of all our distancing from God. We who are not God have no business setting ourselves up as His standard!

So how did Harrison end up with such a shallow, superficial, toy version of Christianity — displayed not just here but throughout this book of his? The blame is therefore his, and the responsibility is his. Maybe not entirely his, though. We need to accept our part of it, too.

Christians Can Learn From This

I don’t know if Harrison grew up in a church. The closest I can find is, he came from “the American South.” He has certainly studied, though, and even though I’ve seen signs that he gets a lot of his information from the atheist internet, I also know he’s had many conversations with many Christians.

So where is it that Harrison acquired that distorted view of Christianity? Why does he still hold on to it? In all his conversations with believers, has no one ever explained any of it to him correctly? Are Christians even equipped to do that? Do our pastors, Sunday School teachers, and small group leaders ever teach these things? If they do, is anyone paying attention? Or do they think it’s just fine to drift along on the surface of Christianity, so a Guy P. Harrison can come alongside for another conversation, and walk away saying, “Yep, more proof that Christianity is mindless”?

Harrison’s questions have answers. I’ve addressed 31 of his 50. Most of them are easy, given just a basic understanding of the faith; but our faith stands up to the hard questions, too. So here’s the one great question for Christians with which I’ll close this series: Christianity is ready and able to meet the test — but how many Christians are?