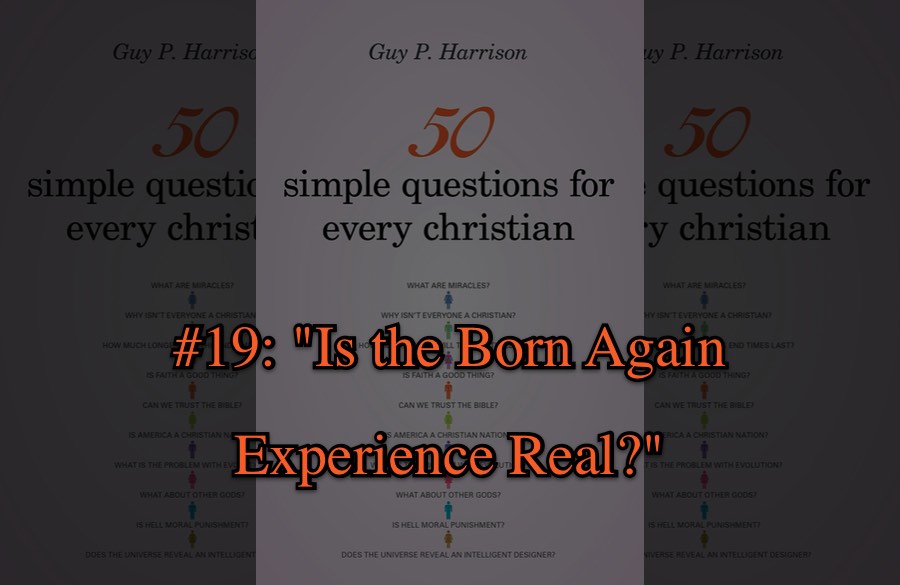 Our atheist friend guy Harrison doubts the born-again experience is real. It’s too easy to be fooled by subjective experiences, he says. Some Christians don’t have the typical evangelical version of the experience, as he thinks they should have, if it was real. And besides, he tried and it didn’t happen to him.

What we’re seeing here is a whole lot of confusion, both over what “born again” means and what we should expect from it.

In John 3 Jesus tells Nicodemus. “Unless one is born again he cannot see the kingdom of God.” First Peter 1:23. says, “you have been born again, not of perishable seed but of imperishable, through the living and abiding word of God.”

And in Titus 3:5 we read, “he saved us, not because of work done by us in righteousness, but according to his own mercy, by the washing of regeneration and renewal of the Holy Spirit.”

That word “regeneration” is rendered “rebirth” or “new birth” in other translations; being born again, in other words.

Here’s what’s going on here, then. Being born again isn’t about an experience, it’s about being given new life. Ephesians 2:1-2 says we were “dead in the transgressions and sins in which [we] once walked.” He’s talking about spiritual death, but the spiritual is real, and especially when it comes to eternal matters. You can’t live forever if you’re already dead. So God needs to give us new life first. The theological term for it is the one I quoted above, regeneration. But new birth, or “born again,” is the same thing. The new birth is our entrance to a new life.

My Experience With This New Life

And this new life is indeed different from the old, qualitatively different. Every Christian I’ve spoken to says it feels different, too. For me, I’m sorry, but I can’t avoid the clichés, since they’re not figures of speech this time: The grass really looked greener the next morning, and the sky looked more blue.

Bad habits simply ceased, not because I was trying harder but because something else was going on. I could tell it was God changing me from the inside. The biggest change was the way the word of God came alive to me, like fire in my soul.

I was different, and I knew it. Harrison doubts that. It’s easy to be fooled by subjective experience, he says, and with a grad degree in psychology I know he’s right. Except this wasn’t just once-and-done for me. It’s grown and matured over time, but 45 years later it’s still there, still real, still changing me from the inside.

But It’s Not About That

For me it happened at a definite point in time. I’ve known others who can honestly say, “I can’t recall a moment without Jesus Christ.” They grew up believing in him, so they don’t have a “born-again experience” they can point to. Still their whole life demonstrates the fruit of regeneration.

And that’s what matters most. Harrison critiques the “born again experience” because not everyone feels it the same way. I say, “Where’s the surprise there? It’s not about the experience, it’s about the reality.”

How Do We Know It’s Real?

How do we know it’s real, though? Harrison rightly reminds us it’s no good trying to call it proof that should persuade someone else. I’m fine with that, as far as it goes. William Lane Craig explains it helpfully: There’s a difference between knowing and showing. I can know my experience of God in me is real, but I can’t show you that it is. Stated differently, I can know God is real partly because I experience Him, but I can’t show you at all that God is real, just through my experience of Him.

My experience of God is my experience of God. If I try to make that proof for you, all you’ve got is my description of an experience, and descriptions are lousy proof. If you’ve actually seen change in my life, that might be good evidence, but then we’re talking about outward effects, not inward experiences.

Shouldn’t we be more cautious, though? Shouldn’t we examine ourselves to make sure we’re not getting fooled?

Up to a point, yes, maybe. But my confidence in Christ isn’t just based on my internal experience. There’s plenty of exterior, objective evidence for Him, too. Other religions claim experiences, he says, but they can’t claim the same evidence. When internal experience lines up with external evidence, there’s just no reason to keep on questioning it.

What Harrison gets most tragically wrong in this chapter, though, is his own imitation attempt at being born again. He was about 13 years old, he says, when he took a phone call from a “telemissionary,” who was apparently just working his way through the phone book. The man told him about heaven and warned him of the danger of hell. Harrison thought that was “harsh,” he says, but, “I sensed the man meant well,” he says, “and I was polite, so I kept listening. He told me that in order to live again after I die I only had to invite Jesus into my heart, ask him to forgive me for all the terrible things I had done in the first thirteen years of my life, and then say the Lord’s Prayer.”

Harrison wasn’t convinced of any of it, yet he didn’t fully dismiss it either, so he followed the man’s instructions and prayed the prayer he was told to pray. He was “completely sincere about the whole thing,” even though he was still pretty unsure about “the actual existence of gods.” It was a “Hey, why not?” thing in his mind. (Yes that’s an actual quote.) Still, he insists, he “gave this thing a fair and honest effort.” Ri-i-ight.

He parroted a cookbook prayer. He might as well have addressed it to Betty Crocker.

The man told him he’d done what he needed to do. Harrison remembers this more than anything else that day, he says: the man on the phone telling him, “That’s it, now you’re born again. You are forgiven and you will be with Jesus now and for eternity after you die.”

Harrison “wasn’t sold,” though. He felt nothing. No “warm sensation, no indescribable peace and contentment, no waves of electrical stimulation surging through my body.”

He Knows Better. Except He’s Foolish.

Really, now. What did he expect? The born-again experience without the new life reality? For this was plainly no real conversion. That telemissionary was wrong. He never should have told him he’d done what it took. Harrison says nothing about repentance, nothing about regretting his sin. He wasn’t even sure “the gods” existed. His conviction rose to the subterranean level of “Hey, why not?”

He parroted a cookbook prayer. He might as well have addressed it to Betty Crocker.

And I guarantee he knows that. He knows it was never real. “I tried my best to imitate the born-again experience,” he even says, adding later, “It was like pulling the trigger on an unloaded gun.”

The analogy is awful. God’s work in the world is neither like exploding gun powder nor like a mindlessly propelled projectile. Yet there’s something to the figure of speech anyway. He drew the wrong conclusion, though. When I pull the trigger on an empty gun, I don’t take its quiet click as evidence that there’s no such thing as live ammo. He’s foolish to take his empty, imitation conversion attempt as evidence that the real thing isn’t real.