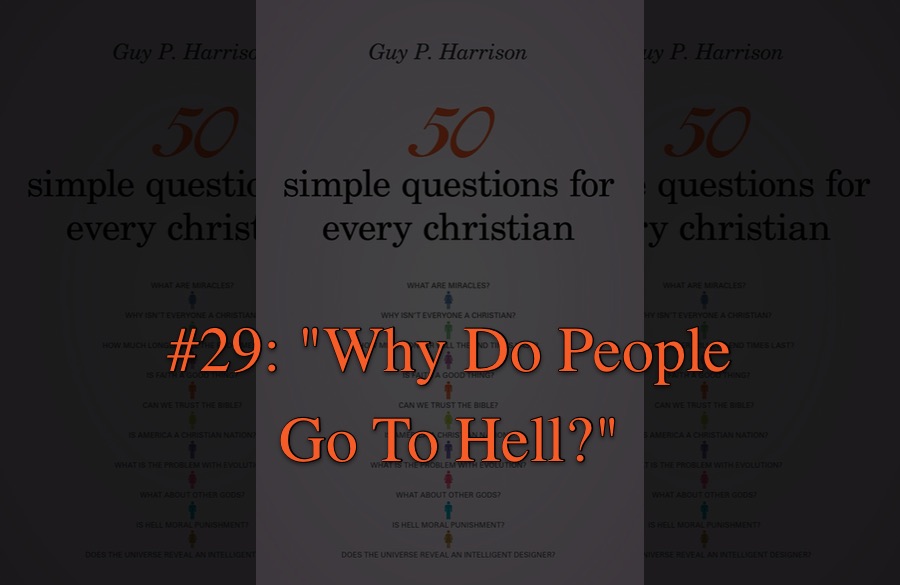 Guy P. Harrison postures throughout his 50 Questions book as a serious student of world religions. He pretends it’s a book of serious questions. Nothing shows up his pretense more than his chapter titled, “Why Do People Go To Hell?”

I started into the chapter thinking I might want to skip it, because frankly, I’d rather not have to talk about hell (a word which, by the way, Catholics often capitalize but Protestants rarely do). It is the most serious subject I know. Harrison let me off the hook, though, by writing a silly chapter on it.

Popular Atheism Is Too Often Too Silly

I shouldn’t be surprised, here in my 29th answer to his 50 questions. There’s been a lot of silliness in this book. It’s of a piece with everything else I’ve read in recent popular atheist apologetics. Richard Dawkins, erstwhile New Atheist Grand Poobah, wrote a supremely silly anti-Christian book, The God Delusion. It proved only that he knew nothing of the Christianity he was attacking, a fact he freely admitted afterward, with fellow atheist P.Z. Myers’ help. He said Christianity was so nonsensical there was no need to learn anything about it. It didn’t interest him at all that by studying the subject he might find out some of his opinions on it were plainly false, and it would make him look ridiculous.

Harrison, on the other hand, claims to have studied his subject. That leaves me asking which is worse? Ignorance justified by contempt for a billion people, or ignorance with no justification whatsoever?

Cartoonish Misconceptions About Heaven and Hell

Harrison displays his ignorance first with childish foolishness. Here’s how he defines his terms, speaking of heaven and hell: “Heaven, serving up round-the-clock goodness for all eternity, seems like it might become a bit boring after the first few trillion years or so. But hell offers constant excitement for residents in the form of weird demons and endless agony. Never a dull day in hell.” Was that meant merely as humor? Is Harrison 13 years old?

Contrary to cartoonish misconceptions, constant goodness is constantly good. Was the logic there too complicated? I’ll try it again another way: If it’s always good, it’s always good. Harrison seems to think “good” eventually flattens out into “boring” and “bland.” He has way too little imagination, and way too little sense of God’s goodness, power, creativity, and beauty.

If Beethoven can make goodness that interesting on earth, do you doubt God could do it even more in heaven?

I like to think of this question in terms of great music. There’s motion in it; tension that rises and falls; even dissonance. The Finale to Beethoven’s 9th Symphony, for example, has an incredibly wild, disturbing, dissonant chord, just moments before the first vocal solo. Suppose you stop the music there. If you have any sensitivity to music at all, you’ll be left in a state of horrific need. You’ll be begging for it to move on, to find release, to “resolve,” as musicians put it. That’s exactly what that chord is meant to do.

So does that mean it’s not good? Hardly! It’s very good; no, it’s great. Many aficionados would call this Finale the greatest movement in the greatest symphony ever written. Boring? Tame? Insipid? Bland? You’ve got to be kidding! And if Beethoven can make goodness that interesting on earth, do you doubt God could do it even more in heaven?

As for “never a dull day in hell,” I can only guess Harrison has never suffered the monotony of constant pain.

He asked, “Why do people go to hell?” So far I haven’t begun to answer it seriously. Instead I’m showing that Harrison didn’t ask it seriously. He says that he has asked Christians their views on hell. But “the usual response is to launch a barrage of Bible excerpts that seem to support their respective positions. … In short, some say hell is in the Bible so it must be real, while others say Jesus is way too nice to be mean.”

The grand revelation there is that Christians don’t agree on everything. Well, that’s news! But he suspects “much of the disagreement between Christians on the specifics of hell comes down to personality types. The tough, hard-nosed sort of Christians are happy to talk about all the suffering and screaming of the damned.”

Pardon me, but that makes me want to put the subject of this chapter in a totally different context: “Like h-***!” It makes me that angry. Happy to talk about it? Christians? I’ve traveled the world with Christians, from Korea to the Caribbean, and I’ve never met a single believer who wouldn’t reject Harrison’s caricatures out of hand. Maybe there are exceptions. Maybe Harrison has met some. He doesn’t posture them as being rare or exceptional, though. Harrison isn’t being serious.

He isn’t being serious, either, when he tries to start an argument between religions. “Which hell do the damned go to?” Hindus “are in trouble with both Islam and Christianity … so which hell do they end up in?” In a book of questions for Christians, this may be the silliest one. And on the most serious subject.

Foolish Imaginations of a One-Dimensional God

Harrison almost sounds adult when he asks, “Where is the love?” As he puts it, “The ideas that God/Jesus forgives and that Christianity is a religion of love are very important to most Christians. However, the concept of hell seems to contradict these claims.”

Any serious student of Christianity would know that’s just another caricature. Yes, God is love. He’s forgiving. But he’s not merely that; He’s not a one-dimensional God. He’s also just.

Niceness doesn’t get anyone to heaven. Only Jesus does.

The answer to Harrison’s opening question, “Why do people go to hell?” is that we go there because of sin. Sin is any active or passive rejection of God. It could range from quiet apathy to rapacious tyranny; either way, it’s a form of, “I don’t care,” directed at the God who designed us, created us, loved us. Hell is a just and fitting landing place for people who don’t really want God very much.

“If Jesus is the only way to heaven,” he says, “and if hell is the alternative, then a lot of nice people must be in hell right now.” True. “Nice” doesn’t rise anywhere near the level of goodness God looks for. None of us has it in us to reach that level. There’s only one hope, and that’s forgiveness. There’s only one just way in which God can offer that forgiveness, and that’s through Jesus’ death on the cross, by which he paid the penalty of sin on our behalf. Niceness doesn’t get anyone to heaven. Only Jesus does.

Finally we reach Harrison’s real problem with hell, or rather, his problem with God: God isn’t as good as Harrison is, Harrison thinks. He had to punish his children for wrongdoing at times, he says, “But never once, no matter how made I was, did I consider punishing them forever.”

I’ll admit the “forever” aspect of hell bothers me, too. I don’t know how to explain it to my own satisfaction, much less to the satisfaction of an atheist like Harrison. Remember, though, he’s already proved he has no conception what goodness means. Yet here he goes, comparing God’s morality to his, and declaring himself the winner. I admit I don’t know the whole answer to the question, “Why is hell forever?” but I am very sure it isn’t, “Because God’s justice doesn’t measure up to Guy P. Harrison’s.”

I fear — though I absolutely rebel against his foolish idea that I might happy about it — I fear he’s just asking to find out about God’s justice the hard way.