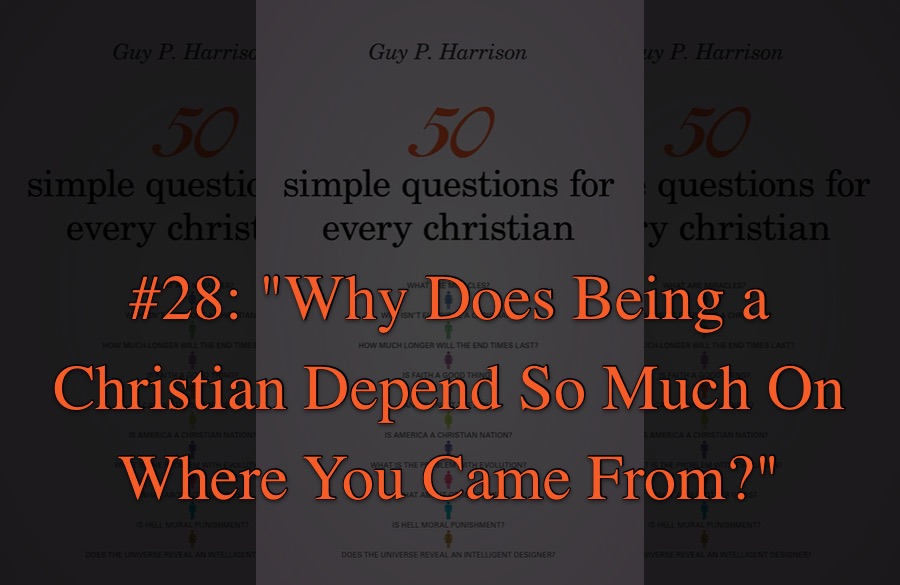 Guy P. Harrison wants to know, “Why do birth location and family matter so much?” He thinks it should bother us that “a baby born into a family of Christian evangelicals in a small South Carolina town” would have a real religious advantage over one “born into a Muslim or Hindu family in Yemen or Mumbai.”

Actually it does bother a lot of us, though not enough. It’s why we have Christian missions, but missionaries could still use a lot more money and manpower than we give them.

But that’s not where he’s going with his question. He thinks Christians are ignorant and God is unjust. Unfortunately I can’t disagree with him totally on the first point. “Why no comparison shopping?” he asks. “How can you be sure Jesus is the right or best answer if you haven’t given Mohammed a fair hearing?”

But some of us actually have done the comparisons. I recommend Nabeel Qureshi’s work as a starting point for others who want to do it, too. The more Christians look at the strength of our faith — our best thinkers, that is — and compare it to the best in other faiths, the stronger we’ll come out. Christianity has what it takes.

In fact, we ought to encourage this as early in life as possible. Harrison rather ignorantly thinks Christianity has grown because “the vast majority of Christians were told to believe … from the earliest days of childhood.” He’s dead wrong on that. I’ve met too many atheists whose parents “told them” to believe. The “Sticky Faith” research project shows that faith sticks stronger when parents and churches encourage kids to explore, question, and ask instead.

It’s nice to be able to agree with Harrison on something — the importance of solid, honest questioning, in this case. It never lasts very long, though. I just about burst out laughing when I read this: “What might the religious landscape be if all children were taught about ten or fifteen of the most popular religions in an unbiased manner?”

Such is the blindness of the self-righteous intellect.

I think it’s hilarious. I might need to explain, though. Call that quote Version 1. I’ll restate it in three new versions, all of which mean exactly the same thing in effect.

Such is the blindness of the self-righteous intellect.

Still we have to face the question he raises: Why do children born to Christian parents in Christian countries have a better chance of following Christ? Stream contributor David Marshall has written much on this, if you really want to pursue the question. I’ll keep my answer short here.

Harrison’s real question is, Why isn’t God more fair? God’s real answer is, Who are you to complain? I’m very serious about this. Every time God gives anyone life in Christ, He’s giving us better than we deserve. Is there something about His choices we don’t understand? Do we need the rest of the information, so we can judge whether God is just or not? Shall we sit in judgment on Him?

Paul deals with this strongly in Romans 9:14-21. An even better source, though, might be the book of Job. Job was suffering horrific pain and loss, and his friends kept trying to sort out the justice of it all. Foolishly, they thought they knew what they were talking about. They were wrong; they were missing crucial background information explaining why God allowed Job to suffer so.

“Which One of Us Is God Here?”

God corrects them for it, but not by filling them in on all the explanatory details. Instead He puts a question to them: “Which one of us is God here: You or Me?”

Who is this that darkens counsel by words without knowledge?
Dress for action like a man;
I will question you, and you make it known to me.
“Where were you when I laid the foundation of the earth?
Tell me, if you have understanding.
Who determined its measurements—surely you know!
Or who stretched the line upon it?
On what were its bases sunk,
or who laid its cornerstone,
when the morning stars sang together
and all the sons of God shouted for joy?”

Nowhere in those four chapters do you hear God defending Himself. He just reminds them who’s who.

God Will Be God, Whether Harrison Likes It Or Not

Guy P. Harrison thinks the Christian God is unfair. It’s as if he thinks he’s got the goods on God; as if he knows enough to pronounce judgment. God will let him carry on for a while, just as He did Job’s friends. The day will come, though, when God will speak out of the whirlwind. “Which one of us is God here: You or Me?”

Harrison probably won’t like this answer. It leaves a lot out. God doesn’t always explain or defend His justice. He doesn’t have to: We have no business judging Him.

God isn’t offering him an unbiased upbringing, either, with ten or fifteen different false gods to choose from. God will be God, the One True God, in Harrison’s life, whether he likes it or not.