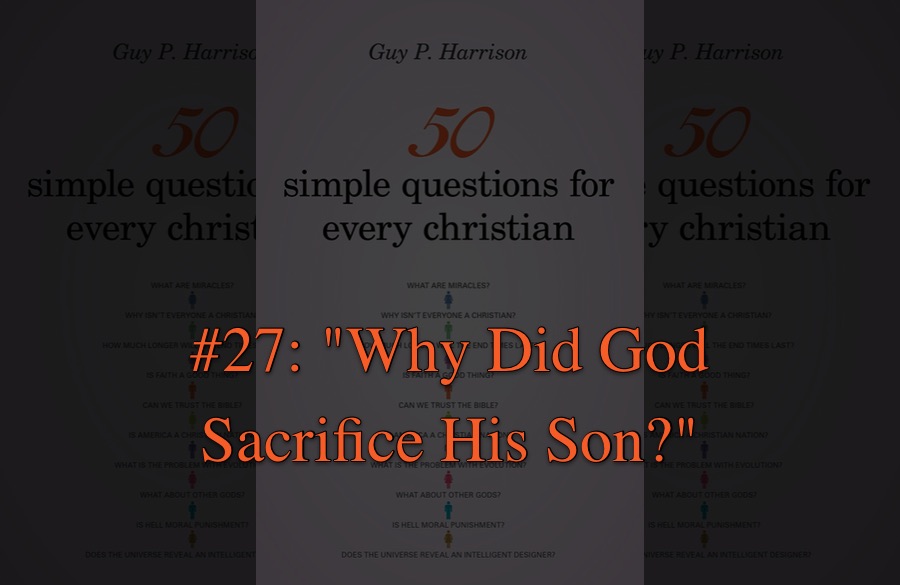 Why did God sacrifice His Son? This isn’t just Guy P. Harrison’s question. Lots of atheists ask it, and not always with what you might call the greatest respect. I get the confusion, though. It’s a vocabulary thing. They don’t understand some very basic, very important words: 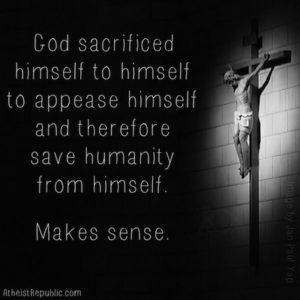 Harrison calls it a “simple question.” It would be, if we didn’t have to go back so far to start over again with the basics. I have only a little space here to explain, but I’ll give it a go.

God is holy. For most of us, that might be even harder to get. It’s His only attribute that gets the emphasis of three-times repetition: “Holy, Holy, Holy, is the Lord God Almighty.” Among other things, it means He’s different, separate, not like us, in infinitely important ways. He’s the Creator, King, and Judge of all. He’s pure and undefiled, without sin or even sin’s possibility.

God is love. He created us for eternal relationship with Him.

He is just. When humans broke relationship with Him through sin, His holiness demanded that we be separate from Him forever. His justice prevents Him from brushing it aside as if it didn’t matter. Justice does not allow massive wrong to be treated as a minor nothing.

God endows humans with the great worth of being created, uniquely among all that He has made, in His own image, meaning above all that we have the ability to make informed choices between good and evil, right and wrong.

Humans sin. We choose wrongly. And if there’s one thing that’s even further from many persons’ understanding than God’s triune nature or His holiness, it’s human sin. We think it’s a little thing, just minor stuff. Compare one of us to another, and it may look that way, but not compared to God’s perfect purity, His holy nature, where not even the hint of a spot of a blemish can be found. In light of who He is, no sin is little. He says “the wages of sin is death” (Romans 6:23), which in spiritual terms means separation from God. Whether we realize it or not, that also means being separate from the eternal source and fountainhead of all goodness, love, and joy.

That death is a requirement of God’s justice. He can’t just look the other way. But He can allow a substitute — a willing, perfect substitute, One who has no sin of His own to die for, One whose sacrifice can have infinite effect because He is Himself infinite. This is what Jesus died for: so that God could be “just and the justifier of the one who has faith in Christ Jesus” (Romans 3:26). In other words, because Christ’s death pays the penalty for sin, God can forgive us without denying His own justice.

This is spelled out in the Bible’s book of Romans, especially the first six chapters, culminating in the rest of the sentence I cut short earlier: “The wages of sin is death, but the free gift of God is eternal life in Christ Jesus our Lord” (Romans 6:23).

The Great Reality, The Great Decision

Skeptics and atheists mock this. They say if it’s wrong to sacrifice to other gods, it’s wrong to sacrifice to God. But they know neither the Son nor the Father; neither the One sacrificed nor the One looking on as holiness is satisfied, and as the door opens again for the triune God’s desire for relationship with His infinitely beloved creation. They don’t know about perfect holiness, love, or justice. Or they try to mash the Christian message into their non-Christian view of reality. It doesn’t work that way, but then, why should it?

This reality is different; this reality is also very real. A Unitarian-Universalist pastor, a cousin of mine, once told me the Resurrection was a “goofy doctrine.” I answered, “Okay, but what if it happened anyway?” Jesus’ resurrection followed His death. He conquered that one last great enemy we all face. This was an event in history, and if the Resurrection happened, so did the crucifixion.

Skeptics would be wise to stop trying to make it make sense from within their own worldview. The reality of the Cross and the Resurrection turns all other worldviews upside down. The question we should all be asking in view of that is, “How could God love me so much? How can I love Him now, too?”