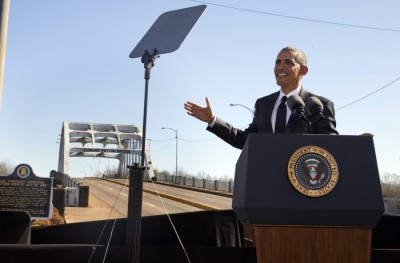 President Barack Obama traveled to Selma, Alabama Saturday to commemorate the 50th anniversary of 300,000 Americans converging on Selma to urge an end to institutionalized racism. As President George W. Bush, Michelle Obama, various Civil Rights era stalwarts and a crowd of black, white and brown listened on, the president painted a vivid tableaux of America’s many struggles for freedom and justice.

It’s hard to imagine anyone who loves the American ideal being unmoved by Obama’s words, or by the simple, poignant fact that 50 years after “Bloody Sunday,” a black American president could stand at the foot of that now famous bridge and look back on how far we have come.

Unfortunately, the President offered some half-truths and left other crucial truths unsaid, truths that if not championed by our political leaders in the next 50 years, will leave America with a large and permanent underclass.

The Washington Post offered this telling summary of what his staff had signaled he would emphasize in the speech: “One of his goals is to link the spirit of the 1960s Selma protests to today’s battles over issues such as gay marriage, income inequality and immigration.” That’s as good a summary as any of where the fog crept in. There were at least four areas where his words did more to obscure than to illuminate:

It’s misguided to equate the ’60s Civil Rights era battle against institutionalized injustice, racism and violence with the homosexual lobby’s push to redefine marriage. Those who organize their personal lives around their same-sex attraction rightly possess robust civil liberties. But the demand to redefine natural marriage, an institution older than any government, isn’t a civil rights movement. It’s an Orwellian redefinition of reality, and a coordinated effort that has begun to infringe on the religious liberties of others.

2. Today’s great civil rights challenge is the war on children.

The contemporary civil rights movement that blacks, whites and Latinos should be marching together for is the one on behalf of our nation’s children. Far too many are being emotionally and physically battered amid the wreckage of broken families. Many are being murdered in the womb.

That right is under assault not just from divorce, but from the push to equate same-sex partnerships with marriage. As a result, say, two men can not only adopt, but pay women to have babies for them. Robert Oscar Lopez is doing important work on children’s rights in this context. His work illustrates how the effort to redefine marriage, far from a civil rights movement, has the effect of violating the intrinsic rights of children.

We need to champion the civil rights of the unborn and defend the institution where children are most likely to survive and thrive —  a home where a child is raised by his mother and father.

3. The poor often are trapped in poverty by lame government schools that survive only because they have a monopoly on taxpayer funds.

The documentary Waiting for Superman demonstrates what anyone from a dysfunctional urban school already knows: the poor are starved for educational choice. If we gave parents the choice of where their education dollars went, terrible schools would improve or perish. The school buildings left behind needn’t stand empty. They could be turned over to new charter schools, to private schools renting portions of the buildings, and even to innovative charter school/homeschool partnerships.

The possibilities for dramatic improvement are there, but not until the government’s monopoly power is broken. Unfortunately, President Obama is a loyal defender of this monopoly power.

4. Reasonable measures to stop voter fraud aren’t “voter suppression.” They protect our rights and the integrity of our democracy.

In the speech, President Obama said that “fifty years after Selma, there are laws across this country designed to make it harder for people to vote,” and later he referred to these as “voter suppression laws.” Asking people to provide picture identification in order to vote is not voter suppression. Pursuing commonsense reforms to make it difficult to vote “early and often” is not an attack on democracy but one of its necessary supports.

Some argue that voter fraud is an aberration that only the paranoid would worry about. But we make it a rarity only by making it hard to cheat, not by pretending that human beings are all just “good folks.” Our republic’s system of checks and balances has endured because it recognizes that power tends to corrupt, and that no human system of government is run by angels. Our voter laws should be guided by this same wisdom.

Fifty years after Selma, the integrity of our voting system is under attack, schools are in decline despite far greater funding than 50 years ago, and the intact, natural family — that greatest of portals into the middle class — is under attack. Ordered liberty requires more than more of the same old Great Society bromides. Real hope demands real change.

Despite All the Spending, Productivity Growth is Skipping Schools