Robert Bowers, Jews Aren’t Children of Satan. You Might Be, Though 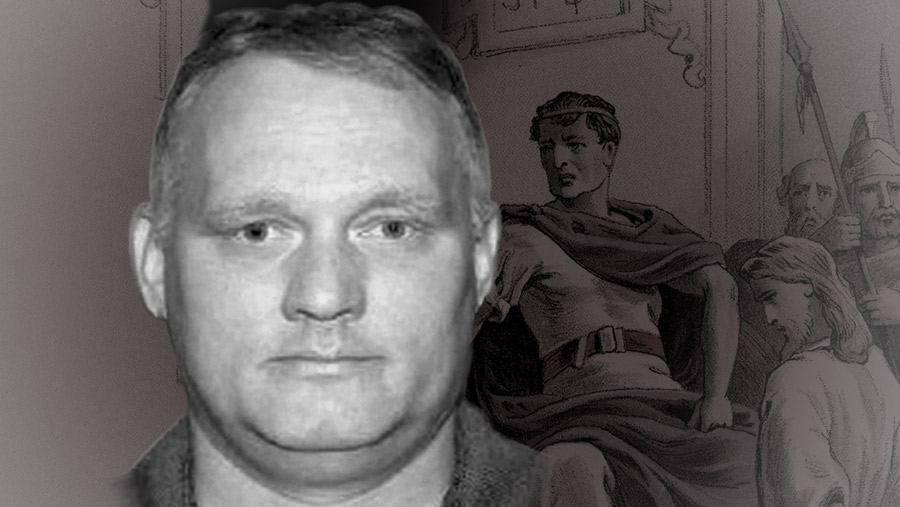 “Jews are children of Satan,” wrote Robert Bowers, the Pittsburgh mass murderer. No, they are not. But as Satan is, Jesus taught, “a liar and a murderer from the beginning” (John 8:44), Bowers did not fall far from his ancestral tree.

Why would anyone say that? Why the Jews? One of the standard lies tossed about by those who hate the Jewish people is that they bear responsibility for the death of Jesus. This is based on a passage in Matthew’s Gospel.

In Matthew 27, we read about Jesus’s mock trial before the Roman administrator Pilate. This coward knew Jesus was guilty of nothing but had insufficient resolve to do justice. Instead, he washed his hands in front of the crowd. “I am innocent of this man’s blood,” he said. “It is your responsibility!” The people responded, “His blood is on us and on our children!”

Was Pilate not, then, accountable for Jesus’s murder? Rather than blame the Jewish people today for what some Jews did then, shouldn’t we blame ourselves for what our ancestor Pilate did? How can anyone believe his guilt transfered to the Jewish people?

Marcus Pontius Pilate was a Roman prefect of the province of Judea. A prefect was like a governor, only unlike American state governors, he operated under but one “constitution” – one that came directly from Rome.

Pilate was dismissed as a fictional character by some historians until his name was found on an inscription in Caesarea in 1961. We now know he ruled for ten years (26-36 A.D.). He was a violent and crude ruler. He “hung worship images of the emperor throughout Jerusalem and had coins bearing pagan religious symbols minted.”

He did this deliberately to offend the Jewish people, who from the days of Moses had been commanded to not worship images. Caesar claimed to be god. His “image” was thus a serious affront to faithful Jews. He murdered both Jews and Samaritans. Eventually, he took his own life by command of Caesar for his cruel and petty administration of Judea.

This is the man who ordered Jesus put to death. The man who asked, with epic cynicism, “What is truth?” Who lacked the strength of character needed simply to say no to an unruly mob. Who released a known killer as he had Jesus scourged and then crucified.

Pilate’s attempt to absolve himself of directing his soldiers to kill God’s Son was pathetic. The symbolic washing of the guilt from his hands in no way removed it. His soul was stained indelibly. Not the most abrasive soap or cleanest water could ever take it away. Pilate was responsible for what he did.

So were some Jewish leaders and the mob they had incited. But not because they accepted Pilate’s attempt to get himself off the hook.

Consider an analogy: I steal $10 million from a bank. I am caught. At my trial, I point to someone in the courtroom I know to be deranged and say, “He did it!” The mentally imbalanced man leaps up and yells, “Yes, I did!”

Does his acceptance of guilt make him guilty? Of course not. Neither did the crowd at Jesus’s trial become uniquely guilty because they accepted Pilate’s challenge. They were morally deranged, and simply wanted to kill Jesus. The “and our children” was sort of like saying, “Fine, good, whatever you want us to say!” This was hyperbole, nothing more.

The bottom line is this: Jews and Gentiles killed Jesus. And not all Jews any more than all Gentiles. Some.

Jesus’s followers were Jewish. Joseph of Arimathea and Nicodemus were Jewish. All the early Christians were Jewish. They did not participate in the effort to kill the Master any more than all the Jews and Gentiles in Jerusalem that Good Friday so long ago.

We are all responsible for placing Jesus on the Cross. He took upon Himself the sin of all people at all times and bore its punishment while hanging on a cross. The cross, by the way, was a Roman form of execution, not a Jewish one.

What has all of this to do with anti-Semitism?

The God of the Bible and the Jewish People

The libel that the Jewish people bear a “curse” for killing Jesus and, therefore, deserve whatever punishment can be given them has been used as an excuse for all kinds of brutality. It added moral weight to the Holocaust, to the pogroms of Czarist Russia, and, very possibly, to the horrible slaughter at the Pittsburgh synagogue.

Satan has always wanted to destroy the Jewish people. They are the people God chose to bring the world His greatest blessings. Most supremely, Jesus, the Son of David.

Jesus said that “salvation is of the Jews” (John 4:22). God promised Abraham that those who bless his descendants would be blessed. Those who curse them will be cursed (Genesis 12:3).

This is a warning to everyone who plans ill toward the Jewish people. The collapse of Hitler’s Germany and the anti-Semitic Soviet Union are but two recent testaments to this truth. Iran and all other nations intending to harm Israel should take heed.

Jews are human beings. Even if one is not a person “of the Book,” he should have sufficient decency to recognize that racial, ethnic, and religious hatred is irrational and evil.

Christians recognized that the God of Abraham, Isaac, and Jacob is the same God and Father of our Lord Jesus Christ. This is the teaching of the New Testament. If you believe that, your privilege and duty to love the Jewish people is clear.

So, while the cancer of anti-Semitism remains, Christians must never accept its presence. We must fight it wherever it is found. In the Middle East. In Pittsburgh. In your local cul-de-sac.

We’re Pilate, But We Should Be the Jews