11 GOP Senators on Board With New Red Flag Law 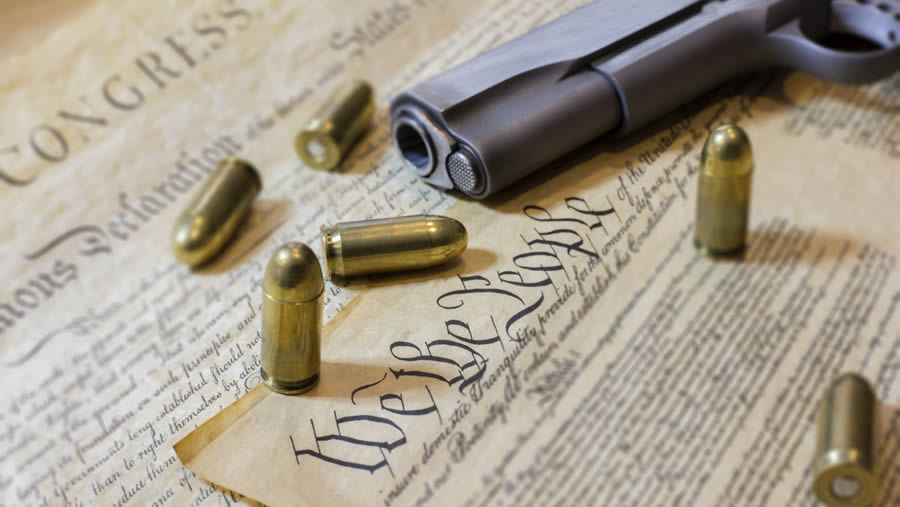 Many have already written on the Red Flag laws that seem to be picking up steam in Congress, including John Zmirak with his “Red Flag Laws Aren’t ‘Common Sense’ Safety Measures. They’re 21st Century Jim Crow Attacks on the Constitution.” Due to new developments in Congress, I want to add some thoughts of my own.

Tentative agreement on gun legislation passed the Senate last Sunday. At least 11 Republican senators support the framework of the bill, enough to reach the necessary votes to pass. They are as follows (I will address the asterisks in a moment):

The Senate bill — as is often the case — has some decent provisions in it. It’s reasonable to include juvenile records background checks, and to increase resources for mental health. Like a sardine baked inside of a beautiful German chocolate cake, however, the senators slipped in a Red Flag law.

This provision is in the form of grants to states that implement their own Red Flag laws. That may be the lesser evil compared to a federally mandated approach, but it still has problems.

First, six of these 11 Republican senators represent states with Democrat governors (denoted with asterisks). None of these are among the 19 states that already have Red Flag laws. So, congrats, Tillis, Collins, Cassidy, Toomey and Burr. You all share the “Fool’s Errand of the Year” award. Best case, you lose governors’ veto power over Red Flag legislation. The worst-case scenario is these liberal governors issuing executive orders in the face of an “emergency,” carried out using funds you’ve handed them.

Second, even states with Republican governors may find it hard to turn down free money. Congress is dangling carrot for them. I could easily imagine governors creatively figuring out ways to “redirect” some of those funds. By taking the money, though, they commit their states to implementing some semblance of a Red Flag law. Thus the camel get its nose under the tent.

If these senators follow through and make this bill a law, it would be popcorn-worthy to sit and watch their ex-spouses or recently-fired ex-staffers sic the gun Nazis on them! Oh, wait, silly me; I forgot. It’s “Rules for thee and not for me.” They would still have their guns and security details.

On June 8, the House passed a bill called the Protecting Our Kids Act. Catchy name, but don’t get too excited. It doesn’t include the tens of thousands of kids dying from the Fentanyl pouring in over our southern border, the hundreds of kids getting shot every night in our cities like Chicago, Baltimore, and St. Louis, the thousands of our young girls and boys being trafficked as sex slaves or the close to a million of our precious babies who will be slain in the womb this year. The bill ignores “our kids” who are in these groups.

Title 1 of this bill would raise the purchasing age for semi-automatic rifles from 18 to 21, even though an 18 year-old is responsible enough to dodge bullets and bombs in a foxhole for our freedom. Five Republican House members support this provision: Katko (NY), Malliotakis (NY), Salazar (FL), Smith (NJ) and Turner (OH).

Five more Republicans are on board for the entire package of the bill … all RINOs. They are Fitzpatrick (PA), Gonzalez (OH), Jacobs (NY), Upton (MI), and of course, Kinzinger (IL).

Young girls get abortions without parental consent, and libs want us to think 8-year-olds should be able to choose to get so-called “gender-affirming” hormone treatment or even surgeries on their own. It’s almost as if they think young people can make responsible decisions. Not quite, though: It’s only permission to do what libs think they should do. No outrage over that!

The Dems’ ‘Deer in the Headlights’ Look

Section 230 is titled, “Prohibition on disposition of firearm to person intending unlawful further disposition.” So, if someone has unlawful intentions, you can’t sell them a firearm. Maybe Pelosi was the one, who in the viral audio called in to the radio talk show host, complaining that the deer weren’t crossing the road at the DEER CROSSING signs. Apparently the deer in her area were ignoring those signs and crossing the road wherever they wanted!

News flash: Criminals with bad intentions will pay no more attention to gun laws than deer will pay to DEER CROSSING signs. In the case of the deer, you could slow down, or even outfit your vehicle with heavy duty bumpers. What can we do about criminals with guns? Maybe we should arm teachers and administrators, and beef up our police forces, instead of defunding them.

Section 301 deals with “Requirement that all firearms be traceable.” Hmm. Why would they want to be able to trace all guns? In a perfect world, this wouldn’t be a problem. But you’ve heard the term “street-wise”? Many of us have become “government-wise,” especially under this tyrannical administration. We’ve seen its true colors, and we know better than to trust it.

Section 604 is about “Buy-back programs.” Australia passed a buy-back law in 1996 following the Port Arthur massacre, resulting in a buy-back of over 650,000 semi-automatic rifles that had been rendered illegal. In 2002, a mentally ill student at Monash University shot and killed two other students with handguns. So Australia went at it again, requiring handguns be turned in for buy-backs.

Then in 2014 came the Sydney hostage crisis, in which a gunman held 18 people at gunpoint in a café and killed one of them. The country passed yet another law, this time buying back 51,000 unregistered firearms (with amnesty). Two subsequent mass shootings followed. The University of Melbourne produced a study concluding these gun laws had little if any effectiveness in reducing homicides.

The following day, the House adopted its own Red Flag bill that would allow confiscation of guns from individuals deemed an “extreme risk.” Representative Chip Roy (R-TX) said, “The only question that matters is who constitutes a dangerous person, who gets to decide, and why.”

These Red Flag laws allow pretty much anybody to get the courts to order the removal of firearms from individuals. An ex-wife/husband, ex-boyfriend/girlfriend, business partner who cheated you, employer who fired you or just didn’t give you the vacation when you wanted it, the professor who flunked you, the guy who sold you that used car that had the transmission problem, or heck, even the owner of the hamburger joint that made your French fries too greasy. There is no end to this insanity!

As they get closer and closer to coming after our guns, I think there will be more and more Americans saying, “Go ahead, make my day.”  I don’t look forward to that happening. No one wants to have to take a stand against their own government. But if we have to? Then we’ll have to.