In 2017, 20 year-old Ed Ford Jr. made headlines when elected to the Middletown Board of Education. He discusses his views on education, race and faith in an exclusive interview. 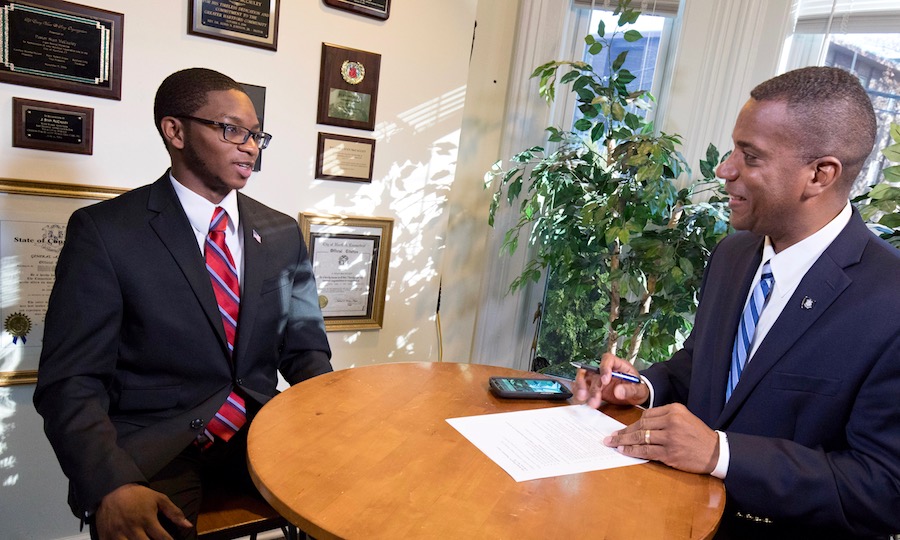 Since winning his seat on the Middletown Board of Education last November, Ed Ford Jr. has had many opportunities to share his views. On November 28, 2017, Connecticut State Senator George Logan (R-17th District) met with Ford (left) to discuss education and other policy issues.

Rarely does the election for a local board of education make national news. Yet, last November, a surprise victory thrust Ed Ford Jr. and his friend Tyrell Brown into the spotlight.

On November 7, 2017, Ford bested four other candidates to win his seat on the local education board. It’s a notable accomplishment for the 20 year-old black Republican, in a city where Democratic voters outnumber the GOP three to one. Brown, a fellow conservative and best friend to Ford since middle school, won a seat on the Middletown Planning and Zoning Commission.

“I didn’t really think about the fact that I am still in college,” Ford tells The Stream. “I just thought about my ability now to make change.”

In addition to his public service and ongoing university studies, Ford currently serves his local church. He volunteers as youth minister at Bread of Life in Waterbury, Connecticut, which his father Rev. Dr. Edward Ford Sr. leads.

While visiting the Washington, D.C., area, Ed Ford Jr. spoke with The Stream about his vision for education, recent notable experiences in his new role and how faith motivates him to action.

Bringing People Together Around Common Values

The Stream: As a college student, why did you decide to run for elected office?

Ed Ford Jr.: To be honest, I really wanted to get involved in the political process. I wanted to put my name in the ring in some form and capacity where I would be effective. My goal was to make change and a real difference, regardless of my age.

One of my core values is fiscal responsibility. A tax-and-spend ideology is unsustainable. In Connecticut, it’s become continuous and habitual. People are being taxed into oblivion and they can’t take it anymore. It’s dangerous when our culture is to have the government take more and more. The people have to step up and say: Enough is enough.

Regardless of what city or state you live in, if you have the means to pursue public-private partnerships rather than government funding for certain programs, I encourage leaders to do so. Senator Tim Scott proposes solutions like this, where you get the private sector involved to help out in certain ways. Then we can scale back on public expenses where possible.

The Stream: In today’s polarized environment, black Republicans particularly tend to attract critics. How do you respond to people who expect you to be in the other party? Ford: I tell them this. Respectfully, I have the values I have. They’re values I believe in. I respect whatever values they have, whether liberal or conservative or whatever. We don’t have to agree, but let’s not forget that we’re all Americans. We’re all in the same boat here, and we need to work together.

Get to know people across the aisle, regardless of who they are or where they’ve come from. Try to work with them towards progress. We keep putting people in boxes, then we ostracize them because we don’t like the category that they’re in. We’ll never get anything done that way. We need to recapture the sense of community that is desperately needed in this country.

Learning and the Leap of Faith

The Stream: What do you see as the big problems facing your city’s education system?

Ford: One of the major problems we have in Middletown, as well as the state as a whole, is the academic achievement gap that we face. Minority students are achieving significantly less than their counterparts. That’s something we believe we can defeat because we know all students have the ability to achieve above and beyond.

We need to provide the necessary resources for students to overcome the hurdles they’re facing in their everyday lives, whether it’s socioeconomic or racial bias. We want kids to be college and career ready, whether they’re black, white or whatever ethnicity. That’s been a problem for a while, and it’s an issue I ran on. A lot of people who are passionate about this achievement gap are tackling it every single day, certainly in Middletown.

Here are some highlights of things I’ve been able to engage in my first few months in office. As well as highlighting some BOE Accomplishments in the same timeframe. Accountability is extremely important to me, as it should be for anyone who asks to be elected.#MiddletownCT pic.twitter.com/YcsYntWi8n

The Stream: How does being a youth minister give you insights into students’ needs?

Ford: My faith is really the foundation of my beliefs and everything in my life. Working with youth in a faith environment allows me to see them on a personal level — what they may be dealing with at home and with their families. Those things weigh on them as they’re trying to focus on their grades. It affects their psychology.

For me, with faith being central in my life, I try to encourage youth to make that connection with the Lord on a personal level. I urge people to get to know God, because he has been good to me — in hard times and no matter what. He is the solid rock you can stand on. You can continue to try again because you have that foundation.

The Power of Honest Dialogue to Bridge Divides

The Stream: Earlier this year, Middletown High School was embroiled in controversy after an incident involving a Confederate flag. What happened and how did students respond?

Ford: A student had brought a Confederate flag to school, and displayed it in the parking lot. Other students were not too happy about it because of the history the flag represents. It is a part of American history, but it’s a dark chapter as many students expressed. My role in that situation was to listen and to be there for the kids. I didn’t do too much talking, instead I listened to them speak, organize and unify.

Students of different ethnic backgrounds — white, black, Asian, Filipino, Hispanic — talked about how this issue affected them deeply, in a civil manner. It’s an example a lot of adults nowadays could learn from. The students took a political issue and handled it very well. They expressed their concerns about race on a broad scale.

Listening to 16 and 17 year-olds articulate their emotions in a comprehensive manner was eye-opening. How do we tackle the racist past that tries to pop its head up every now and then? How can we create an environment of inclusiveness in modern-day America? It requires a responsible conversation to deal justly with an issue that keeps people from going forward.

The Stream: Do you believe there are solutions within reach to bridge the divides between Americans of different ethnicities?

Ford: I do. Those solutions start with conversations. A big problem we have with race in this country is silence. A lot of people don’t want to talk about it, they just want to be silent about it. And that’s what perpetuates it. We have these stereotypes and come to conclusions about one another because we don’t speak with one another.

We need to come together and have community conversations about race issues. We need to understand one another’s backgrounds. You don’t even have to agree; you can agree to disagree. At least you’re building trust with one another in your community by talking. Then work towards solutions together that you feel are best for your community.

The Stream: What are the next steps for you in your studies, and perhaps in politics?

Ford: I’m majoring in psychology right now, and minoring in political science. I’m going on to my Master’s degree. What I plan on mastering in is going to be either psychology or public administration. I really want to continue to go on further in my experience in government, politics and working with people.

I desire to broaden my ability to influence people to make change on higher levels — whether state government or being elected to Congress one day. I’ll follow where the Lord takes me. As a man of faith, I believe God orders and directs my steps as Proverbs 16:9 says. Wherever he leads me is the place I will follow, to try to make the best change I can.