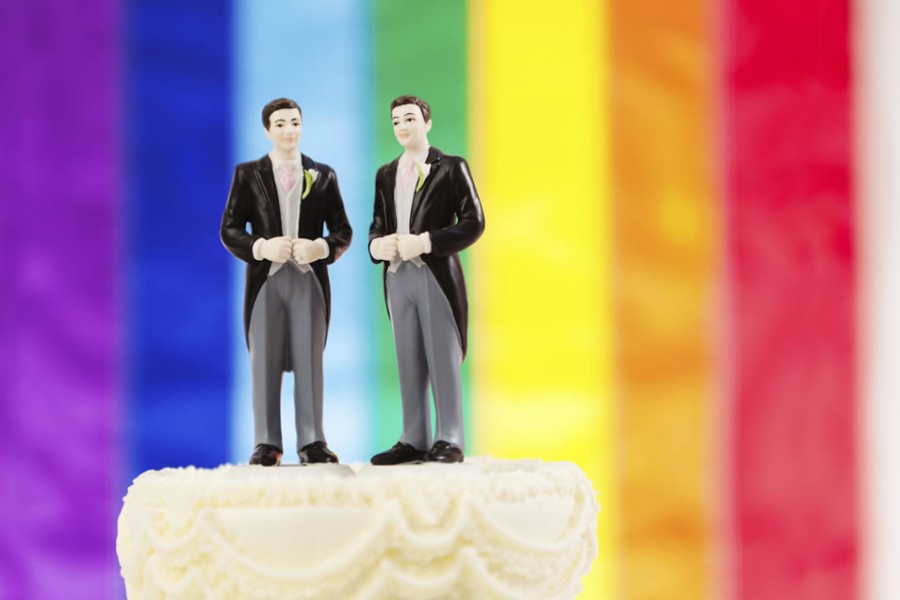 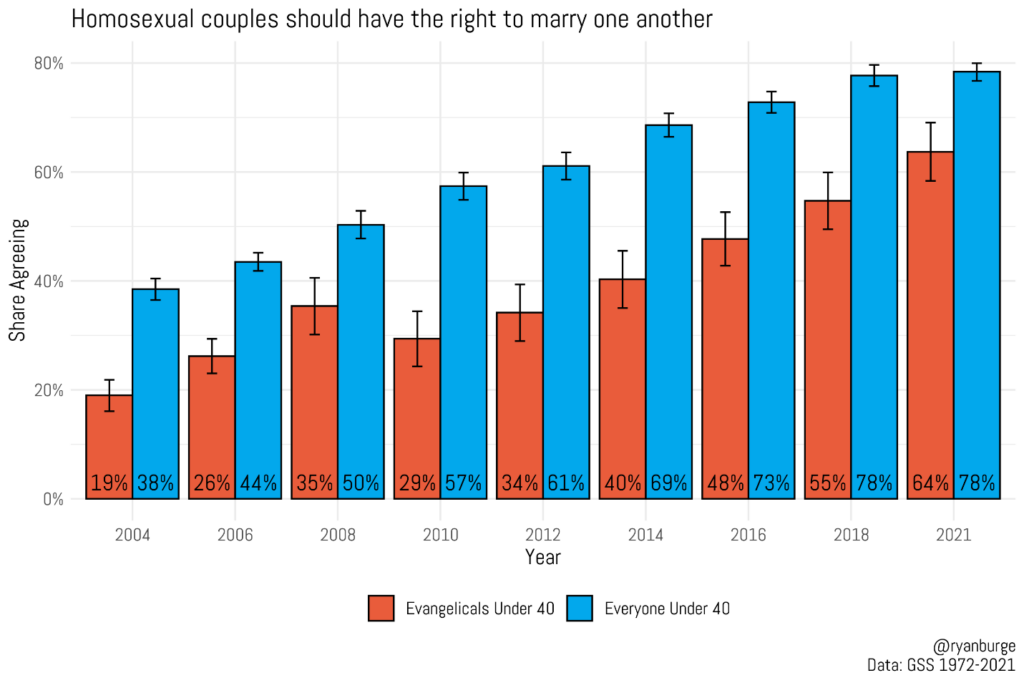 This data from the General Social Survey (GSS) is for adults under 40 years of age. It’s not surprising, right? We’ve heard for years that young adults are more accepting of SSM. But this kind of rapid change on a social issue is highly unusual.

SSM Acceptance Has Been Rapid

Political observers usually monitor much smaller shifts. If you saw a 10% increase over a decade in (say) Hispanic support for the GOP, that’d be a major trend. But here, over a 17-year period, you have an increase in support from 19% to 64% among two large demographics. That’s a 45% jump, an average of 2.6% per year. We don’t see anything even close to this on abortion, pornography or marijuana usage.

Two inflection points stand out to me. In 2008, candidate Obama was quiet about his SSM convictions. But by 2012, he was willing to express public support. As someone once quipped, “There go the people. I must follow them, for I am their leader.” By the time the Obergefell ruling was announced (June 2015), society was already there. Notice the big jump in “evangelical under 40” SSM support from 2014-2016.

Less Difference Between Evangelicals and Others

It’s not just the rate of increase that’s alarming. Look at the gap between evangelicals and society at large. The gap was 19% in 2004. It’s 22% now. So the gap is getting bigger, right? Actually, no. It makes more sense to view this gap on a relative scale. In 2004, societal support for SSM among those under 40 was twice as large as evangelical support. That’s a big difference. Now its only one-third larger. Today, you are less likely to see a difference on this issue between those who identify as evangelical and those who don’t.

Of course, not everyone who identifies as evangelical is steeped in a biblical worldview. That’s another takeaway from this data. Because a biblical world precludes support for SSM.

Someone tweeted this funny book review: “would have given the book 5 stars, but some of the content is dated.” It was funny because the book was a theology text. From an author who had died.

Some truths are timeless. There are few issues on which the Bible’s message is more out-of-step with our society than sexuality. The Bible is without apology on the idea that our desires don’t define us. Nor are they to govern us. Instead, we are to dramatically narrow our sexual expression: from anyone of either gender to just one person of the opposite gender — one person to whom we have previously given a lifetime exclusive commitment.

There was a time when such arrangements were more political or pragmatic. Societal roles were less fluid and more gender specific. Your station in life was less likely to change. Children were an asset because they were needed on the farm or in the family business. Mom needed the girls, and Dad needed the boys, to share their workload. The more the merrier from a financial and even a safety perspective. Potential enemies were more likely to respect you if you had a larger group of sons watching your back, sometimes literally. For most of human history, marriage, if for love, was also for stability, for reputation, and for having children who’d care for you as you aged and then replace you.

In a fallen world not all marriages will produce children. Health problems can interfere. But same-sex unions cannot produce children. When our concept of marriage was more closely tied to producing children, SSM made less sense.

Our Society Has Changed

But today, marriage — for many — is about emotional fulfillment. You see this in the high cohabitation rate. Why fill out the paperwork? Just live together. You see it in the divorce rate. “As long as our love shall last” is a phrase now commonly used in marriage vows. You see it in the deliberate childless rate: Couples who marry with no intention of ever having children. To the extent that we’ve disconnected sex from marriage and marriage from children, opposing SSM makes little to no sense. If it’s just about my happiness, in the present, why deny it for others?

But for Christians, marriage is never about mere personal fulfillment. It’s always tied to higher purposes — purposes that enhance long-term joy. Purposes like children and like modeling the Christ-church dynamic that marriage was intended to illustrate (Ephesians 5:22-33).

We need to work harder to explain a biblical worldview to our children, and how marriage and family fit it. We need to think about our teens’ influences, education, and Hollywood intake. We need to help our young adults see that God’s prohibitions aren’t killjoys. They exist to protect us from harm and to optimize our flourishing. The God who made us knows best how we were made to live.

There’s wisdom in addressing this topic head-on. Christians who have come out of the gay lifestyle — folks like Rosaria Butterfield and Christopher Yuan — are powerful examples of God’s transforming grace. So is an author like Rebecca McLaughlin, who is honest about her reoccurring struggles with same-sex attraction and how Christ empowers her to choose another path.

We should honor the laws of the land. We should love and respect our neighbors who are in same-sex marriages. We can be compassionate without compromising our convictions. We anticipate disagreement. Perhaps even hostility. But we don’t return evil for evil.

We shouldn’t expect to win a popularity contest any time soon. Jesus promised us, “In this world you will have trouble.” But He also said: “Take heart! I have overcome the world” (John 16:33).

Freedom From Same-Sex Attraction and the Homosexual Lifestyle