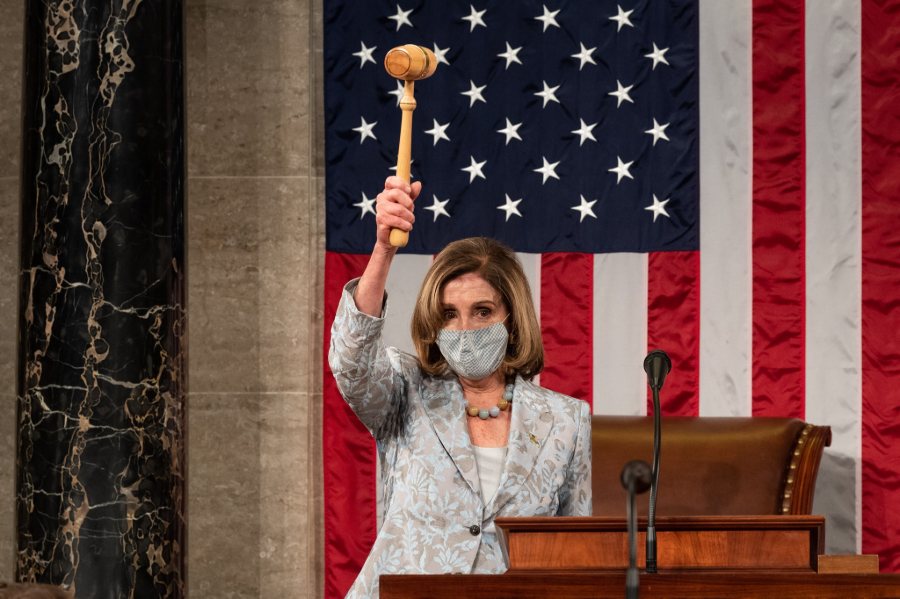 One year ago today, a crime was committed against America. An attack was launched against our very foundations. Against democracy itself. More people were killed in this attack than at Fort Sumter.

Today, like Islamists building a mosque on the site of a conquered church, the perpetrators will be commemorating their crime at the U.S. Capitol. I’m speaking of Nancy Pelosi, Joe Biden, Kamala Harris, Washington establishment and their media and Big Tech allies.

There was, indeed, an insurrection January 6. But Donald Trump and his supporters were the target, not the cause.

The narrative says, “The U.S. House of Representatives was voting to certify the election. And an army of Trump supporters …  at his behest … executed their plan to stop the vote from taking place.”

But was this really what was happening on January 6? What was really stopped?

On January 6, 2021, duly elected representatives, seconded by members of the Senate, were all set to challenge the electors in swing states where voter irregularities and clear illegalities had made Biden wins dubious at best. This was their right. This was their duty.

Had those challenges taken place, hours and hours of election corruption evidence would have been presented before the American people unfiltered. For the first time. My God, that could not be allowed to happen!

Yes, the riot delayed the certification vote by a couple hours. But it utterly quashed the series of elector challenges and evidence presentation, didn’t it? America was denied a full hearing, wasn’t it?

So who benefited from the riot? Joe Biden (or more accurately his handlers), Kamala Harris, the Democratic Party, Trump-hating Swamp creatures like Mitch McConnell. And one Nancy Pelosi.

And not for nothing, but who told Democrats not to fret if it looked like Trump had won re-election Election Night? That when all those (illegally harvested, illicitly generated and mysteriously appearing) mail-in votes from places and persons unknown were counted, the guy who spent the summer and fall in the basement would somehow be on top. “Don’t sweat it,” said Nancy. “We’ve got this. And when Trump raises a fuss about it, well, we’ll just say that’s his desperate effort to stay in power.”

A Shakespearean villain wouldn’t be as cynical and calculating.

Who Paid the Price?

99.9% of the people who came to Washington in support of Trump that day did not riot, did not cause trouble of any sort. This fact alone makes mockery of the idea that Trump incited his followers to “insurrection.” (Trump’s supporters are sooooo loyal, hundreds of thousands would answer his call to come to Washington on a cold January day, but only .1% would answer his call to insurrection? It’s an absurdity on its face.)

Trump supporters in DC that day are the only “rioters” in history who left the city cleaner than when they found it.

Compare their actions to the anti-American rioters who burned and looted and spent three days in the spring attacking the White House, injuring dozens of Secret Service agents. Who set aflame the Church of the Presidents. Who killed, maimed and robbed the innocent and torched federal buildings coast-to-coast with agents inside for weeks on end. They didn’t get a commission from Nancy Pelosi. They didn’t get Joe Biden’s DOJ hellhounds on their trail. They got a check from Kamala Harris.

And yet, if you were in DC on January 6 in support of Trump … or at the prayer vigil the previous night … you have spent the past year investigated, targeted, harassed, fired. Condemned as a “domestic terrorist.”

It wasn’t just the patriotic Americans who went to D.C. in the cross-hairs, but the 75 million people who voted for Trump and smelled a rat. You, too, were “domestic terrorists” according to the soon-to-be-installed president. You were the greatest threat to national security.

You and a guy camping it up with Capitol Hill cops while cavorting in Viking garb replaced Osama bin Laden as Enemy Number One. Average Americans got more heat than ISIS.

Americans Are Being Played

What’s the first rule of propaganda for any totalitarian regime? Control the information flowing out of an event. Do not allow contrary information to emerge.

The regime didn’t have to worry about the media. They would play the regime’s tune note-for-note.  To say nothing of their active role in the riot. Take the known Antifa agitator John Sullivan running around inside the Capitol after the murder of Ashli Babbitt with CNN stringer Jade Sacker yelling “We did it!”

Common sense should tell you how foolish it is to believe the establishment January 6 narrative. It’s being sold by literally the very same people who told you that Trump colluded with Russia, that Trump called Nazis “fine people,” that Hunter’s laptop was Russian propaganda, that COVID came from a wet market, that Nick Sandmann accosted an old Native American, that Kyle Rittenhouse shot three black people in cold blood, and that Jussie Smollett was the victim of a hate crime. Why would any reasonable person believe a word coming out of their mouths today?

Nonetheless, the January 6 narrative is still being bought. In fact, it’s still being sold today. “Every Day is January 6 Now,” the New York Times declares. (This being the same NY Times that conspired with Biden’s DOJ to target the journalists of Project Veritas.) What did Joseph Goebbels teach today’s MSM fascists?  “If you tell a lie big enough and keep repeating it, people will eventually come to believe it.”

But mainstream media’s complicity isn’t enough for totalitarian messaging. Today, people tend to get more news from social media. No problem. After actively helping Biden to “victory” in November, Big Tech was eager to help secure his rule in January.

Facebook and friends immediately censored all video coming from Trump supporters in DC. Video that immediately challenged the story that was being told. Video of folks cheerfully hobnobbing with welcoming U.S. Capitol police or singing hymns on the National Mall. Video from the scene of Trump supporters insisting agitators had emerged from their groups to start trouble. Gone. Posting a video on YouTube laying out visual proof of agitators being stopped by MAGA people? Pulled down.

Heck, the President of the United States himself was banned from social media.

In 2021, you don’t have to put the leader you are overthrowing under house arrest. You simply block him from social media.

And they were just getting started. Hundreds of thousands of conservatives were suddenly purged from Twitter. YouTube accounts were shut down. Podcasts kicked off platforms. Conservative news sites … such as The Stream … saw distribution of their stories cut by 90%. Even further, when the regime decides the story isn’t to their liking.

Due to the rigorous reporting of Revolver and other outlets analyzing case filings, we are learning more and more about what really happened on January 6. We’ve learned there was no organized plans to “take over” the Capitol. We’ve learned that Donald Trump wanted more security for the Capitol but was ignored. We’ve learned the violence kicked in long before Trump finished speaking on the far end of the Mall … but in perfect time to stop the election challenges.

We’ve learned Federal agents and operatives were up to their neck in the events of January 6.

We’ve learned the FBI director refuses to say how many Feds were inside the groups planning to protest that day. How many were ginning up violence. We’ve learned that Ray Ebbs, a man filmed over two days urging violence and a take-over, has not been charged … but grannies who just wandered into the Capitol have been.

It Didn’t Have to Be This Way

One year later, we can only bitterly speculate what would have happened — and where we’d be as a nation — had Nancy Pelosi not conveniently opened the door for forces to stop debate over the 2020 election. To stop America from hearing the evidence.

We can only wonder what would have happened, had Trump’s advice for security been taken. Had his call to “peacefully and patriotically protest” not been falsely and seditiously twisted by the Goebbel’s-worthy propagandists as a call for violence. Had the Biden regime and its allies not used their ginned up “insurrection” rap to immediately launched a full out assault on all Trump supporters, branding them “domestic terrorists” and “white supremacists.” Quashing loyal citizens with the efficiency and brutality of a Third-World warlord.

On January 5, 2021, America was a free country where dissent was cherished. On January 6, 2022, dissent is quashed, oppression is the operating principle, and even your body is subject to the shifting whims of the regime.