With Bolton Bombshells, Civil Strife and Marxists on the March, Can We Still Support Donald Trump? 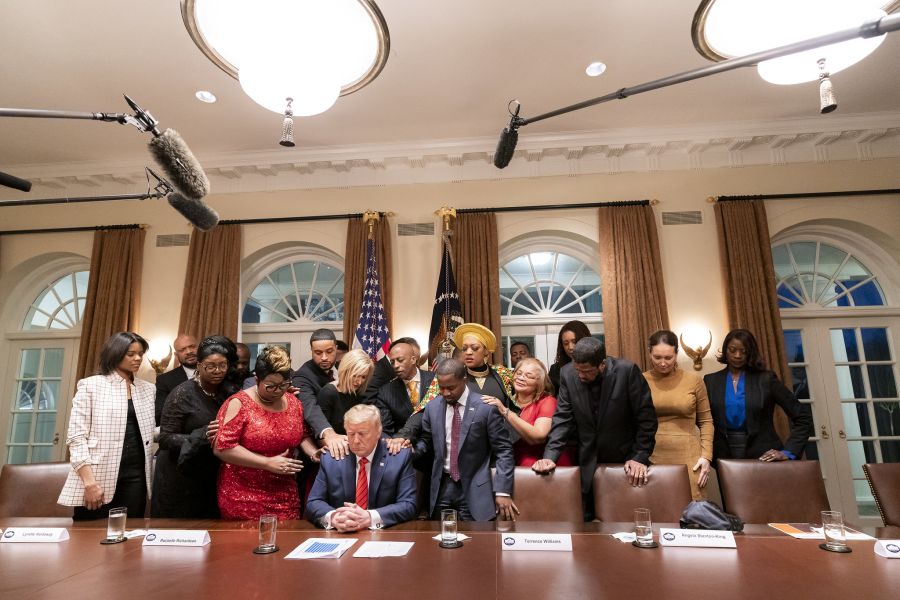 President Donald J. Trump participates in a prayer with African American Leaders and Pastor Paula White Thursday, Feb. 27, 2020, in the Cabinet Room of the White House.

Now is not the time for hand-wringing and second-guessing ourselves. Despite the pandemic and leftist pandemonium, many things that we’ve been praying for to happen in our nation are finally happening. So, at this stage, many of us will not apologize for backing the president, nor will we be intimidated.

Unless millions of Americans and I, who are praying and truly seeking the will of the Father, are missing it, we will keep contending: “If the foundations are destroyed, what can the righteous do?” (Psalm 11:3).

The charge of being a hypocrite if you support the president is often thrown at many Bible believing Americans. I quickly found this out when we released my message last week titled, The Destabilization of America. But hypocrisy means to intentionally deceive someone — who I am on Sunday is not who I am on Monday. We are not dealing with hypocrisy here. So what are we dealing with?

We have two primary issues playing out. Number one, Politics. Pure politics. We embrace the president’s agenda, and face the wrath of those who don’t. We acknowledge Trump’s an imperfect man working hard to create a more perfect union. His critics either look for a sinless man (which, short of Jesus, does not exist) or support policies guaranteed to lead to a less perfect union.

As for former National Security Adviser John Bolton. It’s political reality that many opposed Trump even as they joined the Administration and cashed that big government paycheck. (You want to talk about hypocrisy?) People like Bolton or General Mattis were dead set against Trump from the get-go. Why be surprised when they run from the White House straight to the media to trash him?

Mr. President, know that there are millions who support many of your policies. Hold the line.

Mr. Bolton, is your wrath at being forced out worth the criminal prosecution and fines you now may face? “For the anger of man does not achieve the righteousness of God.” (James 1:20)

The True Battle is Spiritual

Secondly, this truly is a spiritual battle. There’s a big push toward globalism, abortion on demand, sexual perversion, socialism, open borders, and so on. Calling Christians hypocrites is really just a defense mechanism for those who don’t want to see the truth. Anytime you stand for truth, you will be labeled.

Granted, the truth must come from a loving, gentle heart. The truth will offend, but our attitude should not. Many people on the conservative side also need to pray before posting something derogatory on social media. We are dropping the ball on both sides. For example, when I released an op-ed about distorted facts, a lot of people thought that I was writing something against the president (click here to read it). The mean emails I received from “conservatives” were just as nasty as ones from liberals. Folks, we can all use a lot more grace and humility, including me.

The Battle Over Truth

The more concerning issue is that many claiming to be Christians, while denouncing Trump, embrace liberal theology. This group typically has a problem with the inerrancy of Scripture as well as difficult truths, such as repentance, judgment, and sin. So it’s no surprise why they don’t like op-eds, social media posts, or anything grounded in truth. They also welcome anti-scriptural agendas (the LGBTQ onslaught comes to mind), and they mock those who aren’t willing to throw their Bibles away and follow the crowd.

Need more proof? It was liberals calling themselves “Christians” who primarily came against my article regarding what the Bible says about homosexuality.

So, one must ask the question regarding political hot buttons: When Hollywood and most of the media is on your side, are you sure you’re on the right side? The Bible encourages us to be peacemakers but not religious negotiators. In our zeal to reach others, we cannot compromise the message just because we want to be liked. We must speak the truth.

Another question goes something like this: Do ungodly means justify a godly end? To me, this is a no-brainer. The Bible says don’t murder innocent children (abortion). It also says that we should work hard if we can (no socialism). It also says that the government is to guard the nation, securing borders and fighting terrorism (see Romans 13). The Bible adds that we should have judges who are honest and that we should bring God’s Word into all areas of life. And on and on it goes. Many of President Trump’s staff are doing all this and more. How a person, let alone a Christian, can overlook these things is a mystery to me.

No, I don’t believe that all ungodly means are good if they lead to godly ends. It depends on the situation and what the means are. There are many variables, and a blanket statement — like so many of those who speak against the president are trying to make — will not suffice.

We have an interesting dynamic working here: a politician actually doing what he said he would do. His past is not perfect, but he is guiding America in the right direction (in fact, many governmental agencies are now hosting Bible studies). He still sins — as do we all — but it appears that he wants to point our nation back to God. His mode of communication is not always Christlike, but he is honoring God in many areas of legislation.

Just the other day, I ran into a woman who was speaking Aramaic to her daughter. Her English was pretty good, so I asked her what she thought about our president. After explaining that she was a Christian from a persecuted area in Iraq, she said, “I love what he is doing. America is blessed to have him.” Let that sink in.