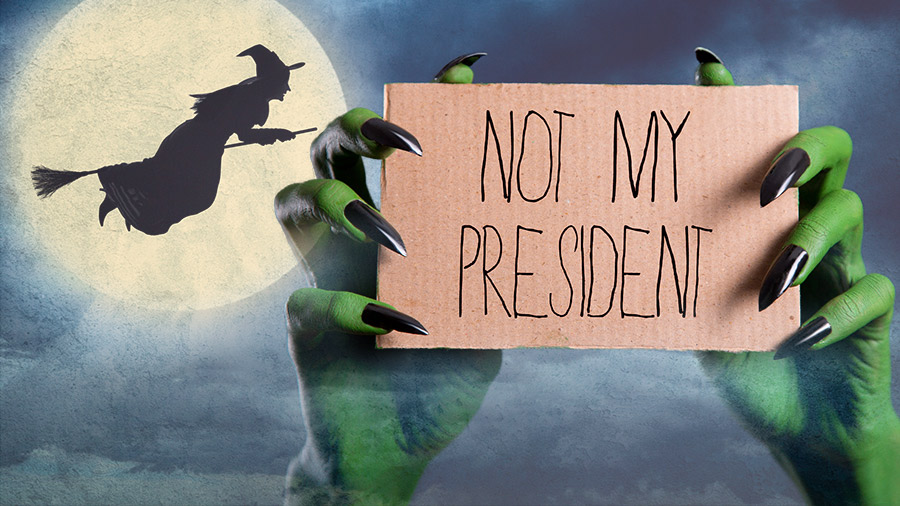 Christians have traditionally followed the command that the Apostle Paul gave to Timothy:

I urge, then, first of all, that petitions, prayers, intercession and thanksgiving be made for all people — for kings and all those in authority, that we may live peaceful and quiet lives in all godliness and holiness. (1 Timothy 2:1-2)

If the early Christians could pray even for Roman rulers who persecuted them, how much more should we pray for political leaders whom we have a hand in choosing. But the call to prayer is even more urgent now, when some occultists who oppose President Trump have started to gather to do him harm — calling for people to perform a ritual to curse President Trump, “bind” him and eventually remove him from office.

By the light of the waning crescent moon last night, self-described witches united to cast a spell on President Trump and his supporters with a ritualistic ceremony. It’s a ritual they plan to repeat every month, and they’ve encouraged others to join them. A Facebook event page, posted by a group that prefers to “remain anonymous,” states, “A Spell to Bind Donald Trump and All Those Who Abet Him: Every Waning Crescent Moon at Midnight Beginning February 24, 2017, Ending when he is driven from office.”

Currently, nearly 9,000 people are following the page. And the #bindtrump effort has clearly reached into the entertainment industry. Pop singer Lana Del Rey will said she would join the event as well, posting dates and times of the rituals on Twitter. The liberal music magazine Rolling Stone, tongue only part-way in its cheek, was also on board, saying so far nothing else has worked to stop Trump, “so maybe a little witchcraft isn’t such a bad idea, after all?”

While some may claim that magic — or at least tonight’s effort — is nonsense and powerless, the Bible is full of scriptures condemning the practice nonetheless. Galatians 5:19-21 is one example:

And do not let your people practice fortune-telling, or use sorcery, or interpret omens, or engage in witchcraft, or cast spells, or function as mediums or psychics, or call forth the spirits of the dead. Anyone who does these things is detestable to the Lord.

For those who practice the occult, Revelation promises that “their place will be in the lake the burns with fire and sulfur.”

Christians Fighting Back in the Spirit

As Rolling Stone reports, one group of Christians is performing spiritual warfare of its own to combat the spells — and calling all Christians to do the same. The Christian Nationalist Alliance, on their website, has declared a Day of Prayer for each of the spell-casting days.

This is a declaration of spiritual war and it requires a response. … We beseech all Christian soldiers to answer this call to action by reading from Psalm 23. We ask you to join us in praying for the strength of our nation, our elected representatives and for the souls of the lost who would take up Satanic arms against us.

The Lord is my shepherd, I shall not want;
he makes me lie down in green pastures.
He leads me beside still waters; he restores my soul.

He leads me in paths of righteousness
for his name’s sake.

Even though I walk through the valley of the shadow of death,
I fear no evil;
for thou art with me;
thy rod and thy staff,
they comfort me.

Thou preparest a table before me
in the presence of my enemies;
thou anointest my head with oil,
my cup overflows.

Surely goodness and mercy shall follow me
all the days of my life;
and I shall dwell in the house of the Lord
for ever.

Dave Kubal, President of Intercessors for America (IFA), told Charisma News, “Whether or not this call for spells pans out and people act on it, we feel compelled, as the Body of Christ and intercessors, to come against this evil with immediate and powerful prayer.”

President Trump Can’t Catch a Break — Even in Church