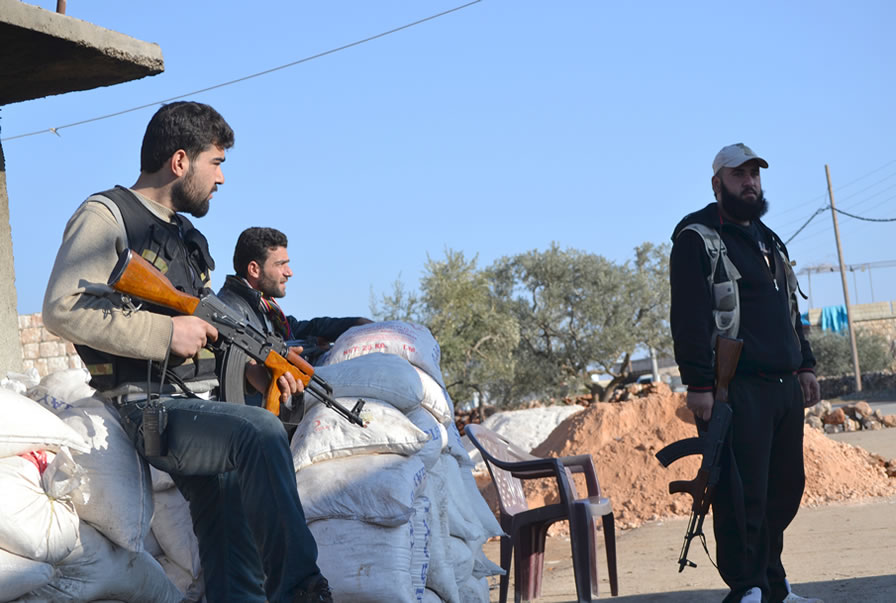 What’s going on in Syria right now is very confusing. But it could have major consequences for America, and for the religious freedom of Christians in the region. Hoping to clarify things for Stream readers, I interviewed area expert and activist Johannes de Jong. A regular Stream contributor, de Jong advocates for the defense of religious minorities, especially Syrian Christians. De Jong has vast contacts in the region and has traveled there to meet with the protagonists.

The Showdown Over Idlib

The Stream: Right now, the major province and city of Idlib is controlled by al Qaeda militants. Jihadists who have murdered and displaced many thousands of Christians all across Syria. They want to impose an Islamic state not much different from the one ISIS built, which the Syrian Democratic Forces destroyed with U.S. help. These militants were the ones hiding ISIS leader Baghdadi from America, until the Kurds located him so the U.S. could take him out. Am I right so far?

De Jong: Yes on all counts. Even a report issued very recently underscores what we are dealing with in Idlib. The organisation ‘Syrians for Truth and Justice’ reports that Al Qaeda (under its local HTS brand) in Idlib have taken at least 550 homes and businesses belonging to Christians since 2018.

Moreover, the U.S. Army spokesperson Colonel Myles Caggins said on February 20 that Idlib province is a “magnet” for terrorist groups. He called them a “nuisance, a menace and a threat” to hundreds of thousands of civilians in Syria, who are just “trying to make it through the winter.” So the U.S. Army acknowledges this officially.

Now the autocratic but religiously tolerant government of Syria, with Russian help, is trying to take the city away from al Qaeda. Turkey wants to help al Qaeda keep control, and use it to dominate Northeastern Syria. That would mean killing or driving out thousands of Christians, Yezidis, and other religious minorities. And ethnically cleansing the Kurds. Again, is that correct?

The Assad regime is for many Syrians as bad as Al Qaeda. But it does not practice religious persecution, as long as the Church is obedient to Assad. If Turkey ceased to need these terrorists in Idlib, they would employ them elsewhere. We know that they already before moved thousands of them to Afrin in Syria and even to Libya. So protecting these terrorists now means that they will be unleashed elsewhere later. We have already seen what that means for any minorities under their control.

Intervening in Idlib means protecting Al Qaeda. The same organisation that attacked the US on 9/11.

The Turks refused to buy U.S. weapons systems last year, instead preferring Russian ones. Now it’s asking the U.S. for Patriot missiles to use on behalf of al Qaeda. Is that right?

Let me say it like this. The Turkish regime wants U.S. Patriot missiles as a back-up to aid its operation protecting Al Qaeda under the pretext of “defending civilians.” Turkey itself has killed many such civilians who tried to cross the Turkish border. So it’s obvious that Turkey does not care about these people at all. No, Turkey wants to keep Al Qaeda in Idlib to have a proxy force there to be able to pressure Assad.

Roping NATO into a Conflict with Russia?

Turkey is threatening that if it goes to war with Syria and Russia, it will invoke the NATO treaty. That could require the U.S. to enter a shooting war. At least to use U.S. planes to bomb al Qaeda’s enemies. Correct?

Turkey wants that, yes. Already Turkey knows that there is zero chance for NATO involvement inside Idlib. NATO will not align itself directly with Al Qaeda. However they do want the U.S. on Turkey’s side, keeping Al Qaeda afloat. They hope that they can trick the U.S. to go into Idlib.

The U.S. electorate and American Christians need to be very aware of the stakes. Intervening in Idlib means protecting Al Qaeda. That’s the same organization that attacked the US on 9/11. It should be crystal clear that it cannot be U.S. or NATO policy to enable Al Qaeda.

The people in the U.S. need to listen very carefully to what U.S. Colonel Myles Caggins said about Idlib. They must tell President Trump that Turkey should face the consequences of its own choices. Turkey changed the Syrian revolution into a jihadist cause. It supported ISIS and Al Qaida. Now Turkey reaps that whirlwind.

What Is President Trump Thinking?

Donald Trump is a New Yorker. Like me, he was in the city on September 11, 2001. Why on earth would he be willing to help that same terrorist group control other cities? And kill more Christians via jihad? Does he not understand what’s at stake?

President Trump seems to like Erdogan on a personal level. In addition, some elements in the Administration will always back Turkey. They think that this is in U.S. interests even though the Cold War is long over.

Turkey is now the biggest supporter of terrorists in the Middle East and Africa. It’s the biggest arms supplier for Al Qaeda, Boko Haram and was that for ISIS.

So it is a grave mistake to think that Turkey is somehow aligned with U.S. interests. “America First” is not compatible with support for Turkey. Unless some people think that supporting Islamic extremists is normal U.S. policy. I don’t think the American people would agree with that. Christians who are supporting President Trump and their leaders should make it very clear to the president. They do not want the US to protect Al Qaeda in Idlib.

What would be the best U.S. policy for restraining jihad? For ensuring religious freedom, protecting Christians and other persecuted groups?

It’s really simple. Stick to the Syrian Democratic Forces in Northeast Syria. They’re the real allies of the U.S. They sacrificed 10,000 of their own men and women to destroy ISIS. Even last month Congressman Ralph Abraham visited North-East Syria. He witnessed there the progress in terms of freedom, democracy, equal rights for women. The freedom and empowerment of Christians and other minorities there.

They are keeping Iran at bay and they continue to cooperate with the U.S. in a significant way to keep all kinds of terrorists away. Moreover, they implement a new mentality that really prevents terrorism. The U.S. should stick with the SDF and stay far away from the conflict in Idlib. The U.S. does not need to be in Idlib. If the U.S. does want a solution for the civilians, it is better to adopt the plan of Walid Phares who suggests to place both Idlib and Afrin under U.N. control.

What Christian Voters Can Do

Dear President Trump, please do not allow Erdogan to trick you into Idlib. To get you mired in a situation that doesn’t advance American interests. The U.S. cannot enable Turkey to protect Al Qaida. Erdogan has to bear the consequences of his mistakes.

Don’t send U.S. Patriot missiles to Turkey. Please stick with your allies in Northeast Syria, the SDF. This is the real “America First” policy at its best. It rewards the people who stick with the U.S. and U.S. values. It protects tens of thousands of Christians and other minorities.

To Christian voters I can only say, please make it clear that you do not want the U.S. to support Turkey and its terrorists, especially not al Qaeda. Please tell the president that it is necessary to stick with the Kurds and Christians of the SDF and not let them down. The U.S. does not need Turkey. But the U.S. does need real allies everywhere in this world. Allies like the SDF will stick with you if you let them.

The Dutch Parliament already made clear that Turkey can no longer count on NATO protection if its meddling in Syria provokes war. The U.S. Congress should do the same.

Fighting Russia to Save Al Qaeda is NOT ‘America First’