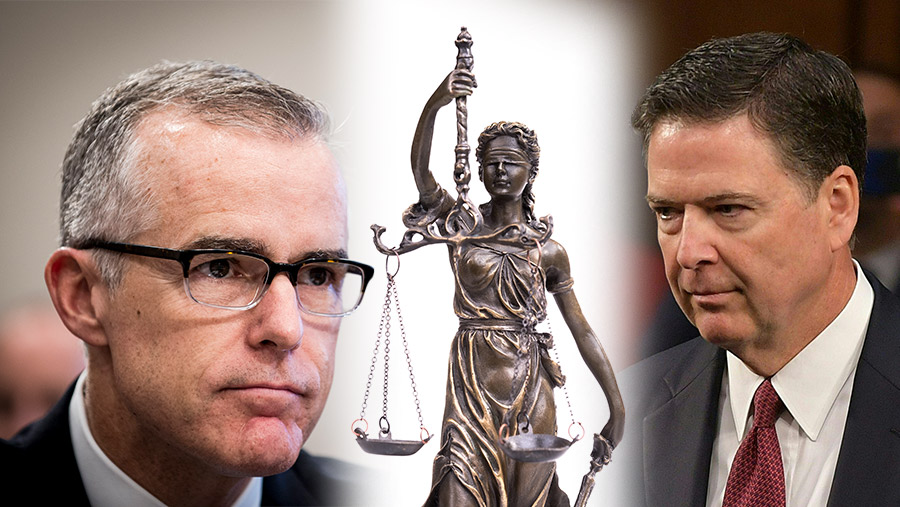 When a political scandal builds, there tends to come one singular moment, one revelation. A moment where even the partisans go, “Oh, my. This is real. And this is baaaaaaaad.” What Trey Gowdy on Sunday called a “game changer.”

For Bill Clinton, it was the revelation that Monica Lewinsky had kept the “stained blue dress.” Remember Clinton’s now-fabled finger-pointing assertion? “I did not have sexual relations with that woman, Monica Lewinsky” was proven a lie. The allegations against Clinton were proven true. He’d end up getting impeached and disbarred. Hillary’s efforts to destroy the young woman had to cease.

For Richard Nixon, it was the revelation that an 18 1/2 minute recording of a crucial Watergate-related meeting had somehow been erased.

Today, we are wrestling with Spygate. The effort by the Obama Administration to spy on and sabotage the candidacy and presidency of Donald Trump.

Each day, a new piece of the puzzle falls into place. But we have not yet had that game-changer moment. The epiphany that shakes even the dead-end Trump Haters. Sure. There have been plenty of developments that should have been “Oh my” moments. Here’s a small sampling.

Where Were You When You Found Out That:

Maybe it’s partisan game-playing. Or the side-effect of Trump Derangement Syndrome. Or an ignorance spawned by the mainstream media’s refusal to tell the stories. But too many Americans dismiss #Spygate with hand-waving. The moments above have not reached a critical mass.

So what will be the “Oh My” moment?

On Sunday, former congressman Trey Gowdy spoke of what he thought might be a “Game Changer.” He told Fox News there are unreleased transcripts of recorded conversations. Long talks between FBI informants and former Trump campaign adviser George Papadapoulos. One “has the potential to be a game changer” if made public. It “has the potential to actually persuade people.” Gowdy suggests the transcript has exculpatory evidence never shown the Foreign Intelligence Surveillance Court. (FISA) John Solomon wrote on this very subject in March.

Rep. John Radcliff laid out the stakes in October 2018 if the Papadapoulos case crumbles:

The underlying pretext to the entire Trump-Russia investigation, is this idea that George Papadopoulos, a Trump campaign associate, had a conversation with an Australian diplomat about getting Hillary Clinton’s e-mails from the Russians. Hypothetically, if the Department of Justice and the FBI has another piece of evidence that directly refutes, that directly contradicts that, what you would expect is for the Department of Justice to present both sides of the coin to the Foreign Intelligence Surveillance Court to evaluate the weight and sufficiency of that evidence.

Gowdy suggests that such evidence exists. And the DOJ did not present it. If so, the underlying pretext collapses. And with it the collusion house of cards. Add to this fact the Aussie diplomat Alexander Downer denies ever saying young George told him about Russia having Hillary emails.

But would hardliners be moved by proof? Would they blink at exculpatory evidence? At rock-solid documentation that the FBI knew Papadapoulos never talked about Russian emails? And so the expressed reason for launching a counter-intelligence operation against Trump was bogus? I doubt it. Spying on Trump under false pretenses still leaves too much wiggle room for excuses.

Maybe it’s partisan game-playing. Or the side-effect of Trump Derangement Syndrome. Or an ignorance spawned by the mainstream media’s refusal to tell the stories. But too many Americans dismiss #Spygate with hand-waving.

The official story is Papadapoulos learned about the Russians hacking Hillary’s emails from a suspected Russian asset named Joseph Mifsud. Ergo, evidence of George (and by extension Trump) colluding with Russians. Only one problem. Joseph Mifsud is most likely Western intelligence. In fact, he ran training programs for FBI agents. He also ran in the same Western intelligence crowd in London as informant Stefan Halper and Aussie diplomat Downer. In fact, it was Halper who wanted Young George to meet up with Mifsud.

Remember the text messages between Strzok and Page on March 14th, 2016, where they are discussing “their guy now talking”? That was the same day I met Mifsud in Rome. Conspiracy is a hell of a charge. It’s coming down on a lot of these freaks.

Would public proof that Misfud was working in cahoots with the Americans to plant information with Papadapoulos be an “Oh my” moment?

A CIA Frame-Up of Candidate Trump?

Couple the above with more facts. For instance:

When all the Russians or Russian-connected people used to create the Russian narrative are tied to the FBI or CIA or Fusion GPS, a reasonable mind would conclude “Frame Up.”

Unfortunately, a side effect of Trump Derangement Syndrome is loss of reason. Think of it for a second: If you discovered a bunch of FBI/DOJ/CIA officials who hated your candidate had paid hundreds of thousands to a spook like Stefan Halper to infiltrate your campaign and conjure up Russian connections that could be used against your candidate wouldn’t you immediately cry foul? Of course. From every hilltop.

But when that candidate is the Big Bad Orange, anything goes.

This is why the “Oh My” might have to wait until Trump is not a part of the equation.

Spying on Other Republicans

How does that happen? When proof emerges that other GOP candidates were spied on during the 2016 campaign.

We are already seeing hints. George Papadapoulos worked for Ben Carson’s campaign before joining Trump’s. He says that right after he joined Carson high-level State Department officials and even CIA operatives approached him. “They invited me to the U.S. embassy to meet with me and basically probe me and to get to know why I’m joining the Ben Carson campaign and what the Ben Carson campaign was really about.”

In retrospect, Papadopoulos thinks this points to “illicit surveillance” having been underway against others in the race. As DCNF notes, when Papadopoulos was approached in November 2015, a Quinnipiac University poll had Carson virtually tied with Trump for the Republican nomination.

Carson’s just one. During Attorney General Bill Barr’s confirmation, Sen. Ted Cruz asked “Do we know if the Obama administration investigated any other candidates running for president?” Barr said he didn’t know. Similarly, Sen. Rand Paul asked CIA director Gina Haspel in a letter if she knew anything about the CIA collecting information on all the 2016 presidential candidates, including himself.

The American Stasi at Work

Do we have evidence that government agencies collected intelligence on Republican candidates? Well, in April 2016 then NSA director Admiral Mike Rogers shut down a program the Obama’s FBI/DOJ began in November 2015 that allowed private contractors to access raw FISA information. According to an internal audit ordered by Rogers, an unbelievable “eighty-five percent of those queries” were unlawful or “non-compliant.” And the targets were “U.S. persons.”

TheConservativeTreehouse.com has a great detailed analysis of “The Obama Use of FISA-702 as a Domestic Political Surveillance Program.” A key line:

The database was repeatedly used by persons with contractor access who unlawfully searched and extracted the raw results without redacting the information and shared it with an unknown number of entities.

According to the audit, these private contractors were given “raw FISA information that went well beyond what was necessary to respond to FBI’s requests.” And the improper access granted to outside contractors “seems to have been the result of deliberate decisionmaking.”

Was one of the contractors Fusion GPS? Yes, according to The Conservative Treehouse sources. One thing we know: The day after Rogers shut down the program, Mary Jacoby, the wife of Fusion GPS founder Glenn Simpson went to the White House.

But did the Deep State use the illicit FISA-702 “query” program to target Republican candidates? You could have an answer shortly.

DOJ Inspector General Michael Horowitz releases his report in coming weeks. It explores the use of FISA courts to investigate the Trump campaign.

But note very closely what Attorney General William Barr said when asked about Horowitz’s report. “I talked to Mike Horowitz a few weeks ago about it. It’s focused on the FISA, basis for the FISA and handling of the FISA applications. But by necessity, it looks back a little earlier than that.” (emphasis mine.)

Translation: “The IG is looking at the earlier abuse of raw FISA data. This gathering of data on political opponents didn’t start with the FISA warrants on Donald Trump campaign members.”

If proof emerges that Obama’s team was collecting dirt on any candidate other than Trump? Then any defense of spying on Trump falls to bits. There will be zero excuse for avoiding the truth. We’ll have to face it. Obama used the most powerful weapons of our nation’s intelligence apparatus (and other nations’) against his political opponents. You know, the way East German leaders used to use the Stasi.

The Simpler Path to “Oh My”

Of course, we might have a much easier path to the game-changing “Oh My.” That’s if one of the players produces the proverbial “blue stained dress.” If we get a confession.

In fact, if I am Attorney General William Barr or prosecutors John Huber and John Durham I don’t go public with indictments. Not until I have a major figure who’s pleaded guilty. I want the public to hear from the horse’s mouth.

As we wrote about last week, the conspirators are beginning to point fingers. All it takes is one to point the finger at themselves.

The result will be more than a game-changer. It will be a history-maker.