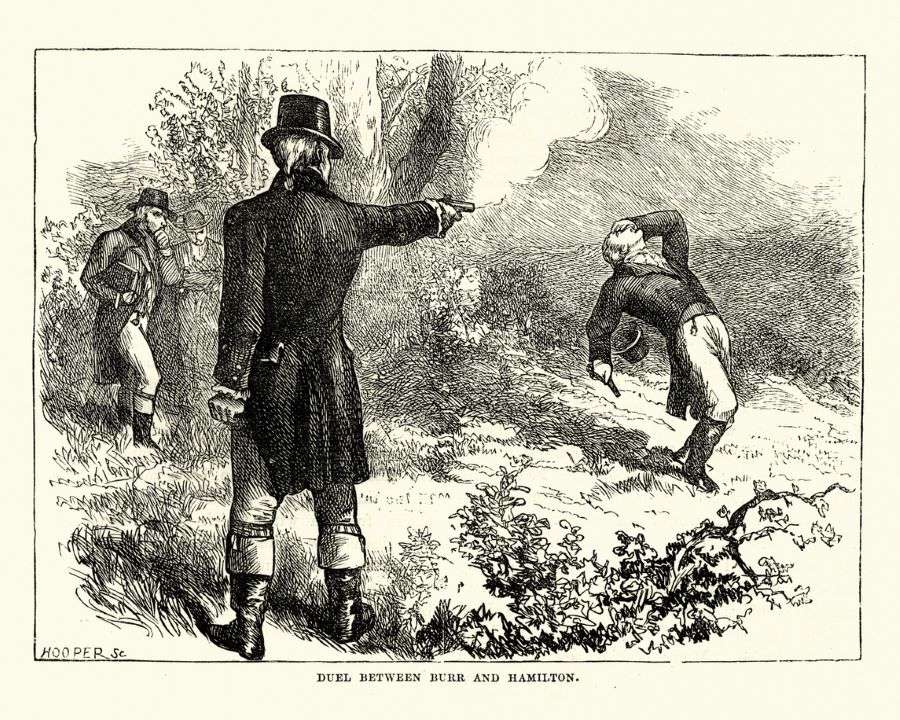 Vintage engraving of Duel between Aaron Burr and Alexander Hamilton.

Will Smith’s attack on Chris Rock was an assault for which he could be charged.

It could also be the re-assertion of the male honor code.

Yes, it is against the law to casually walk up and slap somebody in the face, which is what Smith did to comedian Chris Rock at the Oscars ceremony when Rock made a joke about Smith’s wife. People went into shock and the internet lit up, and the debate about the Slap will probably go on for months if not years. Smith himself resigned from the Motion Picture Academy over it and has been banned from the Oscars for 10 years.

Chris Rock has refused to press charges, even while the LAPD and much of the press demanded he put Smith in handcuffs.

Where I grew up, this would have been considered as two men having a beef and settling it between themselves. Especially if you made a crack about a guy’s wife or girlfriend. I’ve seen guys laid out for saying less, and no cops were ever called.

We live in the freest culture in the world, a place so chock-a-block with attorneys that disputes over parking spaces go to court. In our old honor culture, things got settled quickly and physically. This wasn’t always good, turning into bullying or frontier justice … or lynchings.

The Pendulum Swung Too Far

Still, perhaps protected Twitter tantrums have made it too easy to get away with too much for too long. Also, and as Cro-Magnon as it is, there are times when a man feels he needs to throw down in defense of his woman. It’s primal, it’s not politely correct, but there it is. Smith’s wife Jada Pinkett-Smith is suffering from alopecia, a condition that made her lose her hair. Would Don Rickles, the “merchant of venom” himself, have made the same joke? I don’t think so.

In his great book, Honor: A History, critic James Bowman explores how the concept of honor morphed. It went from an expression common among regular people, as well as military and aristocratic groups, to a reflection of how well a citizen acts in the service of a therapeutic, Woke Progressive state (i.e., Hollywood culture). These points of honor were once important not just to how your fellow citizens saw you, but in the eyes of God. Honor was connected to how you would be perceived after leaving this world. It had, as Bowman notes, “an independent existence of its own.”

Living with honor was important, but so was dying with honor. The grisly mass slaughter of World War I, Bowman argues, made such deaths more difficult, disillusioning generations of Westerners about honor. Writes Bowman:

The fact that we continue to mythologize the slaughter [of WWI] in this way suggests a continuing need to remind ourselves that our parents and grandparents were right to dishonor honor, perhaps because we fear its reinstitution into our twenty-first century culture.

Instead of Honor, Shame and Purge Trials

Perhaps the Oscar Slap will be heard around the world. It’s ironic, of course, that it happened in Hollywood — a place which has replaced the old honor code with the new, Woke code of Shame. The new code is in total service to our Oligarchy, punishing as dishonorable and disgraceful anyone who ask awkward questions about crime, immigration, transgenderism or taxes.

As Bowman notes, communism tried to subvert old notions of honor, replacing its religious and local context with the all-powerful state. Communists, “who lacked the self-consciously militarist trappings of the Fascist and the Nazis to provide a link with the old honor culture, tried to reshape the honor culture to their own ends.”

Communists worked to disgrace to those identified as traitors and counter revolutionaries, for instance by Stalin’s show trials in the 1930s. (These find an echo in the cancel culture of today.) Bowman observes:

By inducing [defendants] — in many cases, it seems without torture — to admit, falsely, to the most shameful acts, Stalin had made the point that in the Soviet system, honor itself was to be considered a mere creature of the revolution, and of revolutionary necessity, and to have no independent existence of its own.

Maybe the Fresh Prince just remind us of that independent existence.