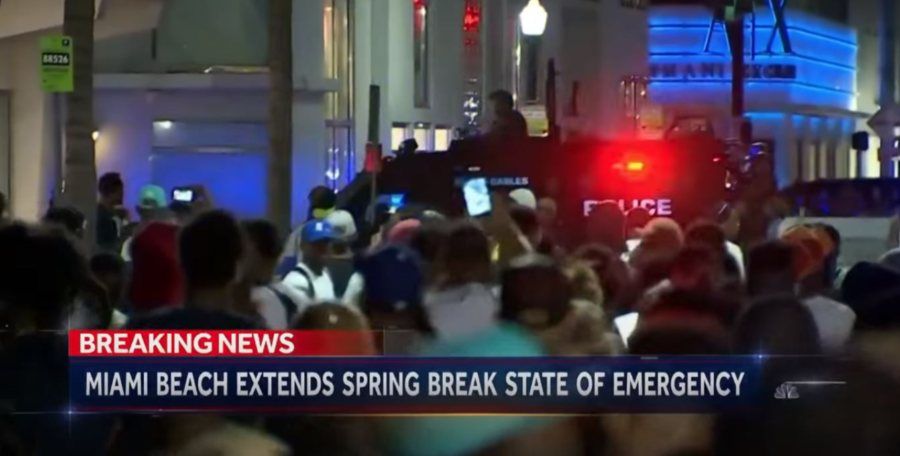 I was there. Collins Avenue in South Beach last Friday night. It was the night before the mayor of Miami Beach declared a state of emergency, imposing curfews and closing bridges, in an effort to curb the “disorderly conduct” resulting from the influx of Spring Breakers who had descended on the city. The ordinance came less than 24 hours after walking a mile back to our hotel when no Ubers were to be found at 10 p.m. Sure, why not? A little Spring Break in Florida never hurt anybody. Or did it?

Throngs of people flooded Collins Avenue — walking to who knows where to do who knows what when they got there. The pungent smell of marijuana permeated the streets, waxing and waning on changing ocean breezes. Cars raced down the street as both rowdy young women and profane rap music oozed out of the windows. On every block we passed, there were sorority sisters and prostitutes dressed to get attention. Sadly, I couldn’t decipher between them since, to me, they were dressed as one and the same. Police cars were on every corner, lights flashing. Those lights blended in with the lights from tattoo shops, nightclubs, bars and restaurants to create an intoxicating atmosphere for the intoxicated. I watched a girl — maybe in her young twenties — pushed up against a police car, handcuffed from behind and in the process of being arrested.

We kept walking and the more we walked, the more my brother-in-law and husband felt that the scene was unsafe. “Keep walking,” they said. “It’s not safe right now.” But I felt safe. I felt protected. My heart began to hurt for what I was seeing — a microcosm of a broken, lost humanity playing out over five city blocks.

Going to the One

That’s when I saw her. A girl with her hair dyed jet-black, skinny and drawn, sitting on a concrete step by herself. It was in that moment that I turned to my husband and said, “I’m supposed to stop. I’m supposed to pray with her. I’m supposed to tell her about Jesus.”

I wish I could say that it happened, but it didn’t. We were walking so fast and the streets were so crowded that I didn’t turn around. I didn’t risk making a scene or being rejected. On the contrary, by the time I got out of my head about whether or not I was hearing from the Lord, I had crossed the street onto the next block. Today, I prayed for that nameless girl and for another opportunity to open up a conversation just like Jesus did with the woman at the well.

Exchanging the Offense of the Gospel for Cultural Christianity

Within hours of witnessing that scene, Sean Feucht’s Instagram post popped up on my feed. He wrote, “We are SALT and LIGHT. Don’t trade your God-given AUTHORITY for relevancy or influence. IT’S A TRAP.” I had nowhere to look but within myself.

Somewhere along the way, had I traded Jesus’ potentially-offensive command to “Go into all the world and proclaim the Gospel to the whole creation” (Mark 16:15) for a more culturally-palatable version of presenting Jesus through clean living and influencing people through good works (which, by the way, can be accomplished by me or the Peace Corp)? Was my priority in having a good time with family, putting blinders on, and going insular after a hard year like 2020? Or was I willing to be a vessel that would pour out the light and life of God within me no matter if I was on the clock or on vacation?

Jesus Himself said in Luke 8:16, “No one after lighting a lamp covers it with a jar or puts it under a bed, but puts it on a stand, so that those who enter may see the light.”

I know that Jesus, the Light of the World, came into my darkness and illuminated my life.

I know that He saved me when I couldn’t save myself and reconciled me to my Creator.

I know He paid the price for my sin through shedding His own innocent blood on the cross.

I know that I now have a new life in Him, full of purpose and the promise of eternal life.

The Natural Evidence of Transformation

This news changed my life, so wouldn’t it be natural to be sharing it everywhere I went? Perhaps this is why renowned nineteenth-century preacher Charles Spurgeon said, “Every Christian is either a missionary or an impostor.” Either we have been set free and transformed by the truth of the Gospel or we haven’t. And if we have, wouldn’t evangelism be the natural evidence of our transformation?

The remaining walk back to the hotel I thought about the words of Jesus in Matthew 9:36, “When he saw the crowds, he had compassion for them, because they were harassed and helpless, like sheep without a shepherd.” Maybe that’s not how most of that crowd felt that night as they were in full-blown party mode, but that’s what I saw. And the Lord was using it to break my heart afresh for what breaks His.

If we feel the threat of being cancelled by Cancel Culture…

If we fear rejection even though Jesus Himself was rejected…

Let’s start with our own hearts, asking God to rekindle the joy of our own Great Salvation. Fall in love with Jesus all over again. When we live in the joy and reality that Jesus is the best thing to ever happen to our lives, sharing Him with others will be the most natural thing we will ever do.