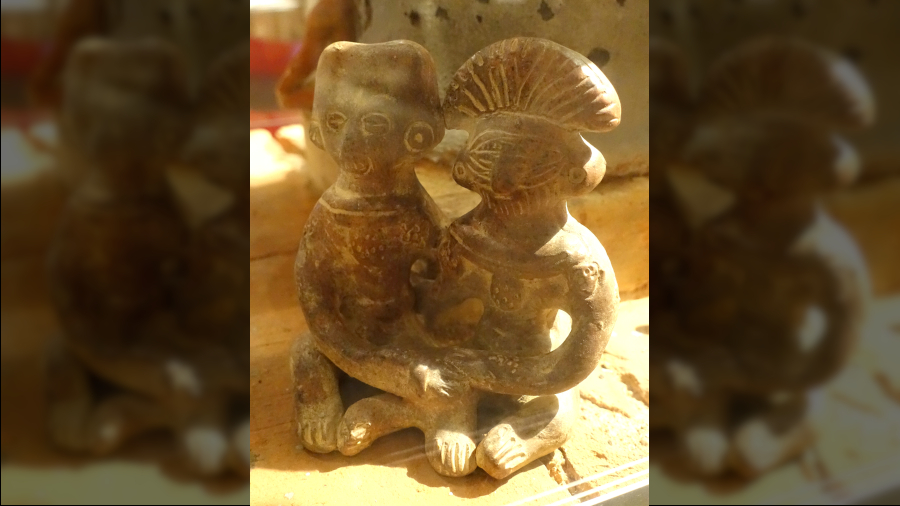 I don’t know whether you’ve met Pachamama yet, but she is the Earth Goddess of South American tribes. She was recently thrust into the international spotlight because a carved statue of her — naked and pregnant — was featured in indigenous rituals at the Vatican in Rome.

Conservative Catholics were shocked by what seemed an open display of heathen idol worship within the grounds of their sacred city. Meanwhile, liberal Catholics danced with glee around the Pachamama statues in a church just a stone’s throw from the pope’s front door. A few conservatives retaliated by marching into the church in the early hours of the morning last Thursday, snatched the offensive idols and chucked them into the Tiber river.

That the statues represented the pagan earth goddess now seems clear. Pope Francis himself referred to them as “Pachamama.” What remains unclear is whether the statues were being used to worship Pachamama or whether they were present merely as a cultural artifact — representing the culture of the indigenous people of the Amazon area.

Either way, it’s interesting to note that there is an upsurge of passion for the Pachamama in South America — and not just among the tribal people in the jungle. John Zmirak explains here how the primitive native religions of the region are being used by leftist politicians to bolster their appeal to “the people.”

Last week I happened to be on retreat with a wonderful Catholic priest who is working in the jungles of Peru. He was dismayed by the Pachamama display in Rome and said devotion to the ancient Peruvian goddess is also surviving and thriving where he works.

Not only are the people of South America enchanted by Pachamama, but “spirituality tourism” is booming as Elizabeth Unger explains in this article from National Geographic.

With a recent boom in spiritual retreats sweeping the tourism industry, more people are journeying to the Amazon in search of natural healing. Some travel for ayahuasca, a hallucinogenic brew that’s said to have powerfully transformative effects on the mind and body.

But in Bolivia, few realize that ayahuasca merely scratches the surface of an ancient mysticism that’s been flowing through the country for thousands of years.

Bolivia is home to brujas (witches), the Kallawaya (medicine men) from the altiplano, and curanderos (local healers or shamans).

While their work differs in scope, their beliefs are centered around Pachamama, or Mother Earth, who is appeased through ceremonial payments.

La Paz Mercado de las Brujas, or the Witches’ Market, is a hot spot for spiritual workers, who read fortunes and facilitate cha’llas (“offerings”) to Pachamama. Vendors sell items like colorful sugar tablets, cigarettes, dried starfish, lacquered frogs, coca leaves, and even llama fetuses that can be assembled into custom-made payments. In exchange, locals believe they will be blessed with better health, prosperous business, safe travel, and good luck.

Why is the primitive paganism of Pachamama so attractive to Western liberals? Because paganism is the perfect spirituality for people who hate Christianity.

Why? Because paganism is not dogmatic. Pagans don’t have a Bible, a creed, a catechism or canon law. Their religion is free flowing, amorphous and open ended. For many moderns, “Dogma divides.” The practice of paganism allows everybody to believe whatever they want just as long as they do service to the gods.

The second reason paganism appeals to modern Westerners is because it is syncretistic. In other words, because it is not dogmatic, it can make room for other religions. Pagans have lots of gods and can always make room for one more. Therefore, those who are devoted to a global economy, global government, global technology and global culture will fall in love with paganism because paganism travels well. It’s everywhere and everyone can be united around a global spirituality that everyone recognizes in one way or another across a wide range of cultures.

The third reason paganism is ripe for renewal is because it is ancient. Everybody is intrigued by a spirituality that connects back to the antiquity of humanity. We want our religion to be rooted in the past, and paganism snakes down to our age from the most ancient histories of people from every age and culture around the world. Modern liberals will be enchanted as they sit in a circle on a mountaintop with a feathered shaman dancing around them casting spells. They’ll feel connected with all the ancient earth magic and feel their rootless lives are suddenly bound in a profound link with the ages.

The fourth reason liberals gonna love Pachamama is her identity as Mother Earth. Here is a religion for all the eco-warriors. In fact, at the Vatican last week the term “eco-theology” made a strong appearance. The global ecology movement will see Mother Earth as a unifying goddess. The new earth religion will be high tech, global, mobile and definitely very cool. As Elizabeth Unger says in her National Geographic article, heading out to Peru, Bolivia or Brazil to do some local voodoo is going to be the next great travel adventure.

The last (and maybe the most attractive) reason why paganism appeals is that it is not linked to a specific moral code. We’re used to the idea that religion is involved with being good and obeying God’s rules. But the concept that being good has anything to do with God was an idea uniquely revealed to the Hebrews. Paganism has no intrinsic connection with morality. Making offerings to appease and please the gods is what it’s about. In a society where the creed is “it is forbidden to forbid” and “I’ll do it my way” a religion that makes no moral demands is just the ticket. With paganism you can practice a groovy spirituality and do what you like.

Christianity: The Only Way

In contrast, Christianity makes specific claims. Because God took human form in Jesus Christ, Christians believe particular historical events are important. Therefore particular doctrines must be believed and a particular moral code must be observed. This particularity is, by definition, exclusive. Jesus said it himself, “I am the Way, the Truth and the Life. No one comes to the Father except through me.”

That is not going to be popular with the devotees of Pachamama. Remember that old TV commercial for margarine? The nice nature woman suddenly became angry. The sky darkened, lightning flashed and thunder rolled as she roared, “It’s not nice to fool Mother Nature!”

In the coming conflict of religions it may not be the religion of Islam that most threatens Christianity. It could be the cult of the ancient earth goddess.

Faced with the exclusive claims of Christ, her slaves may very well rise up in fury saying, “It’s not nice to fool Pachamama!”

What Paganism Gets Right, and Why It’s Still Nowhere Near Close Enough